“I had a friend who was getting married. I gave her a subscription to the magazine ‘Modern Bride.’ The subscription lasted longer than the marriage.”—Lily Tomlin

Living life on one’s own terms is a pleasing recurring theme shared by many of this year’s recent releases, particularly those written and directed by women. Whether it’s a Catholic girl rebelling against her abstinence indoctrination in Karen Maine’s “Yes, God, Yes” or a first-time author recoiling from the affirmations she once sought in Kris Rey’s “I Used to Go Here,” the heroines of 2020 have generally had little patience for well-worn patriarchal formulas. The same could be said of Gaby (Chelsea Peretti), the witheringly sardonic protagonist of Andrea Dorfman’s comedy, “Spinster.” Though the film’s title may be an instant turn-off for some viewers, it’s not the put-down one might expect nor is it indicative of a squirm-inducing satire on the order of Todd Solondz. If anything, the picture is a touch too benign for its own good, though it does earn enough laughs to warrant a recommendation, at least in its first third.

I’ll confess that I’m unfamiliar with Peretti’s stand-up career as well as her recurring role on the acclaimed NBC sitcom, “Brooklyn Nine-Nine,” but on the basis of her work here, it’s clear that she can anchor a film with her wry detachment, a skill that is quite tricky to pull off well. We first see Gaby suffering through a meet-cute story shared by a potential client of her catering business, and has no qualms with informing the bride-to-be that marriage is “a contract of ownership that evolved into gross consumerism—and then a tax cut.” This leads to a hilarious break-up scene where Gaby’s boyfriend (Eugene Sampang) confesses that he’s been sneaking around her back to play board games with his new flame, an affair that amuses her with its sheer lameness. Gaby’s inability to muster any real tears for this seemingly tragic turn of events accentuates just how little she’s invested in the societal expectations that keep other people her age up at night.

Jennifer Deyell’s script is divided into chapters that display title cards for each season of Gaby’s 39th year, and nearly all of the film’s funniest moments are contained in its initial section. After her latest relationship falls apart on her birthday, Gaby makes a few disastrous stabs at revitalizing her love life. She flirts with a doctor only to discover that’s he’s married and joins a baseball team where the cute guys take the sport way too seriously. A sequence where she scrolls through various incompatible faces on a dating app culminates with her finding her brother, Alex (David Rossetti), whose own stand-up set is so painfully execrable, it just might be the saddest thing in the movie. Much more charming are the scenes between Gaby and Alex’s 10-year-old daughter, Adele (Nadia Tonen, resembling a pint-sized Frances Conroy), whom she agrees to babysit. Watching this pair stroll through a store, searching for the ideal yarn to knit a hat, one can immediately sense Gaby’s gift for connecting with children, and how it can be utilized in ways that don’t involve motherhood.

One could easily picture the mopey comedy that “Spinster” could’ve become, with gags dependent on the main character’s obsession over her biological clock ticking toward its expiration. Gaby’s resilience is part of what makes her so refreshing, yet her detachment does begin to feel like a limitation once the film settles for a more generic sweetness, causing its humor to quickly run out of steam. Though the script feeds us fleeting clues about what makes Gaby tick—such as the fact that her father abandoned their family—we never get a vivid sense of her inner life, and when raw emotions are required to rise to the surface, particularly during a scene set at a cemetery, they appear forced. Time and again, the answers to Gaby’s problems materialize all-too-easily, while wise elders—including the woman next door—vocally endorse her choice of lifestyle. The only character who could be deemed a villain is Blair (Kevin Kincaid), an irate partygoer who charges Gaby with being selfish because her desired single status will result in his kids paying her pension. His dialogue maddeningly articulates the misogynistic bile of countless conservative commentators, yet it would’ve been more impactful had Blair not come across as a one-dimensional troll.

By the time “Spinster” reached its last twenty minutes, I began to get traumatic flashbacks of last year’s underwhelming Rebel Wilson vehicle, “Isn’t It Romantic,” a rom-com spoof that squandered its immense promise by embracing the very clichés it had promised to ridicule. Dorfman’s film comes awfully close to stumbling down that same dead end path, as Gaby finds herself in a too-good-to-be-true situation that is straight out of B-movies. How Deyell manages to subvert our expectations nonetheless while remaining true to Gaby’s character is what ultimately saves the entire picture. It’s tantamount to Bob Fosse wisely selecting the bittersweet yet honest ending for his underrated 1969 directorial debut, “Sweet Charity,” over the more conventional one that he had shot. In fact, there is no detectable bitterness that exudes from Gaby, only gratitude for having had an experience that demonstrates how happiness is indeed achievable.

Part of me wishes that this film had maintained the edge that is established in its opening moments, mining the absurdity in dating sites that are so depressing, they might as well have “The Island of Misfit Toys” playing on repeat. Peretti is a delight in her first major film role, and I’m eager to see her have the opportunity to delve deeper into the vulnerability necessitating her character’s deadpan armor. Yet even though “Spinster” is not as funny as I might’ve hoped, it does a fine job of portraying how womanhood is not—and should never be—defined by sexist gender roles. Nothing is guaranteed to any of us, as this current pandemic has demonstrated, so why wait for our path toward fulfillment to arrive in the way we had dreamed, or had been dreamed for us? What better way is there to tackle life’s inherent uncertainties than by taking our cue from Charity to live “hopefully ever after”? 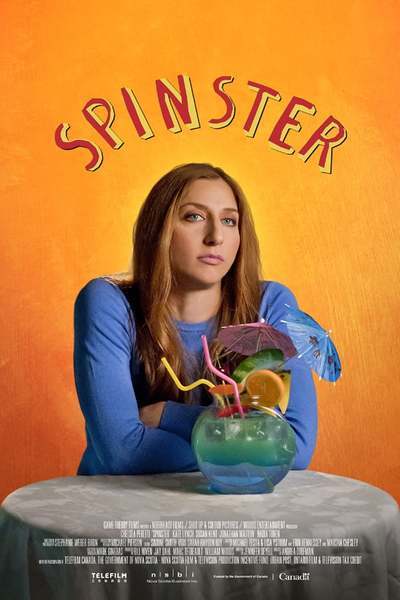