I Used to Go Here

"I Used to Go Here,” from writer/director Kris Rey, captures the sometimes uneasy in-between time of life in your mid-30s, when your college dreams haven't exactly panned out, or if they have then they didn't bring you what you thought they would bring. Some people flourish in their 30s. But for others, it’s a difficult decade, with hard-to-name tensions. Maybe you feel like you should be further along on whatever path you have chosen. Maybe you look around, and all of your friends are married and pregnant. Maybe you feel that biological clock ticking. If you're in a bad headspace, it seems like everyone except you is living their best lives. This sounds very dark. But "I Used to Go Here," grounded by a beautiful performance from Gillian Jacobs, treats its subject light-heartedly, while still managing to be honest.

Kate (Jacobs) is excited to have published her first novel, although, as she declares to her best friend (a very funny Zoe Chao), “The cover is horrible.” And it really is. It’s one of the worst book covers I’ve ever seen. The title isn’t much better: Seasons Passed. Is that a double entendre or is it just … really bad? Still, it’s something to be published, especially since her fiancé has just broken off their engagement and—according to his Instagram feed—has already moved on with another woman. Initial sales of Seasons Passed are disappointing, and her publishers get spooked, canceling her upcoming book tour (their forced pep-talk cheerfulness over the phone is crushing). Bereft, Kate takes up an offer from her alma mater to do a book reading.

Thrust back into the familiar world of her old college town, she is overwhelmed by nostalgia. Her book reading is organized by her onetime writing mentor (Jemaine Clement), now head of the Creative Writing department. He’s got his wife in tow, but he flirts with Kate, asking her to go out for a drink afterwards. He's handsome, wearing a turtleneck and blazer, and his behavior is a little bit sleazy, but it’s the kind of sleazy favored by men who consider themselves to be intellectuals. This is such a specific dynamic and Clement nails it.

Throughout, Kate is in between two worlds: her book is a failure, and yet here at the college she’s a “star,” with hopeful students asking her for career advice. She can barely be civil. Her book is bad, she feels like a fraud. Kate regresses, and quickly. She gets into a battle of wills with the hostile proprietress (Cindy Gold) of the B&B where she’s staying, and befriends a group of college kids living in the big house across the street (the house where she lived when she “used to go here.”) Instead of focusing on the adult activities of being a visiting teaching artist, she hangs out with the kids, eventually calling them by their nicknames (“Animal,” “Tall Brandon”). The kids sense she’s having some kind of mild nervous breakdown, and don’t question why she keeps coming over. The actors playing the kids—Josh Wiggins, Forrest Goodluck, Brandon Daley, Khloe Janel—are all excellent, and they collectively create a believable sense of a tight-knit group of friends.

If “I Used to Go Here” were made in 1976, Jill Clayburgh would have played Kate. The role requires that kind of honesty and an almost cringe-y awkwardness, coming from the character’s self-consciousness and embarrassment. Clayburgh’s characters may have been awkward but they were always intelligent, always trying to figure things out to the best of their ability. Jacobs is firmly in the Jill Clayburgh tradition. (See also the excellent “Don’t Think Twice.”) Jacobs is so good at suggesting the competing stresses working on Kate's psychology, and makes Kate's descent into adolescent irresponsibility both funny and touching. “I Used to Go Here” features a very well-drawn character arc, thanks to Rey’s script, but Jacobs fills it with heart and feeling.

There is an extended sequence late in the film—when Kate and the kids go on a midnight mission—that doesn’t work very well, and has such a different tone it feels like it’s from another film entirely. It’s just not as interesting as the rest of “I Used to Go Here,” with its focus on nostalgia, regression, adulthood, letting stuff go. It’s always dangerous to try to capture what can’t be captured again, to try to re-enter the world your younger self inhabited. Nostalgia can be beautiful, but it can be a trap too.

A final thought: The fact that Kate wrote such a bad book is dealt with in a really subtle way, so subtle I almost missed it. Why would this smart funny woman write such a terrible pretentious book? At one point, she declares defensively that she was trying to write a “restrained” book. Considering the wacky shenanigans she gets up to during the course of the film, it’s clear by inference that Kate has been lying to herself, in her life and in her writing, and the critics who trashed her book sensed it. One of the college kids tells Kate he read a personal essay published in the school newspaper back when she was a student; he tells her it was so good, and "so sad." Feeling floods Jacobs’ face as she remembers that essay, how sad she was when she wrote it, how free she felt to put that sadness into words.

Maybe Kate will write another book now. Maybe now she can write as herself. 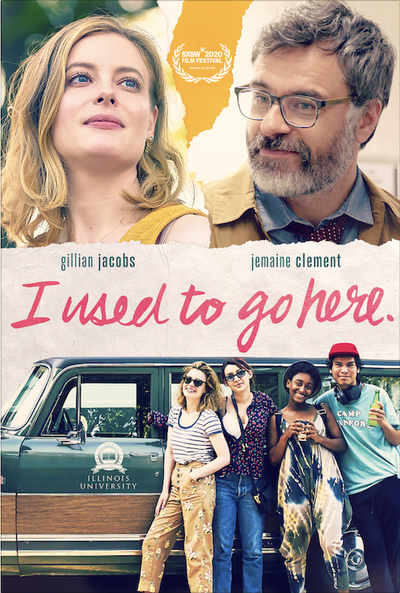