To diffuse the tension that almost ruined their seemingly flourishing friendship, Bjørn (Morten Burian) and Patrick (Fedja van Huêt) drive to an empty landscape where they unleash their pent-up aggression by screaming at full volume. Liberated, Bjørn believes the animalistic ritual has bonded them, but in truth this outing is the beginning of the end.

And while the clues of impending horror emerge long before this episode of camaraderie—signaled by Sune Kølster’s unnerving orchestral score from the opening frames—nothing can fully prepare you for the appalling dark places “Speak No Evil” is headed to.

From Danish actor-turned-director Christian Tafdrup, who co-wrote the screenplay with brother Mads Tafdrup, this brilliantly bleak cautionary tale about letting others cross one’s boundaries for the sake of civility evokes both the male anxiety of Swedish director Ruben Östlund’s “Force Majeure” and the malevolence of Michael Haneke’s “Funny Games.”

The two men first met months prior in Tuscany while on vacation with their respective families. In one of their earliest meetings, Patrick, a rugged Dutch charmer, makes a good impression when he unironically compliments Bjørn, from Denmark, on his heroism. The Dane’s feat: finding a plush rabbit that belongs to his daughter Agnes (Liva Forsberg). With an ego boost from a man he immediately respects, a shit-eating grin crosses Bjørn’s face.

Lured by Patrick’s nonchalant confidence, Bjørn develops a platonic attraction. An unfilled victim of societal conventions who always plays by the rules, the pleasant Danish father and husband finds in Patrick a role model of assertive masculinity who does as he pleases and speaks his mind without restraint. Even back home in Copenhagen, Bjørn remains unable to shake the unspoken desire to leave passiveness behind that his new pal awoke in him.

That Patrick’s subliminal infiltration of Bjørn’s receptive psyche occurs via inconspicuous remarks and gaslighting tactics but never evident dialogue speaks to the exceptional nimbleness of the Tafdrups’ writing. The toxic insidiousness only grows in impact the more time they spend together after an eager Bjørn accepts Patrick’s invitation to visit them in the Dutch countryside, despite his wife Louise’s (Sidsel Siem Koch) initial hesitation.

In ordinary fashion, the Danish clan reconnects with Patrick, his vivacious wife Karin (Karina Smulders) and their young son Abel (Marius Damslev), born with a condition that prevents from speaking. Since Tafdrup and cinematographer Erik Molberg Hansen shoot the interactions within the home with the unshowy natural lighting akin to a social realist drama, one might at times forget the genre. There are no jump scares here, just awkward silences and telling looks.

Almost immediately, the Dane’s tolerance to disrespect is tested. First, with Patrick feigning to ignore Louise’s vegetarian diet and Karin mandating that Agnes sleeps in the same room as Abel. But nothing the hosts do can be described as overtly aggressive or offensive, initially. And that plausible deniability of malice persuades the Danes to refrain from questioning them or from outright leaving. Afraid of hurting the other part’s feelings or being perceived as rude, they accept the treatment as consequence of a cultural divide.

Trapped in the dynamics of politeness—part of the reason they even agreed to visit strangers in another country—Bjørn and Louise feel powerless as they experience even more offenses that unequivocally cross the line. And yet they choose to stay because Patrick and Karin’s mental warfare targets their discomfort with confrontation. And as much as we, the viewer, can feel frustrated at their decisions, it’s impossible not to wonder how much one would condone before reacting under the ambiguous circumstances.

The Bible verse from which the film takes its title also includes the mandate “be gentle and polite to all people.” But acting blindly in line with this prescribed code of conduct and against their gut eventually puts Louise on edge and makes her partner pay attention, though it may be too late. Burian as Bjørn completes the most drastic emotional transition from admiration to betrayal for a devastating performance that concludes in paralyzing shock.

But Burian’s astonishing display of range only works because Tafdrup was, somehow, able to cast and direct committed actors willing to run the full gamut of what their characters endure or perpetrate—even the most unspeakable of acts. To play Patrick, for example, van Huêt operates with a calibrated interpretation of the macho persona that can easily turned off the combative attitude for disarming vulnerability. Bjørn falls for it repeatedly because he feels seen and want to emulate his spontaneous gallantry.

And because Patrick and Karin’s perverse scheme functions marvelously to obtain what they're after, one minor quibble with “Speak No Evil” is that the filmmakers don’t satiate our curiosity to learn more about what led them to this monstrous lifestyle and how they’ve maintained it with such proficiency. But, of course, in doing that Tafdrup may have risked opening the door to contrivances in the plot or to revealing too much too early.

It's precisely the concealment of Patrick and Karin’s endgame and the way they bewitch their willing victims that makes “Speak No Evil” a disturbingly fascinating study of human psychology. Don’t expect cheap thrills nor gore galore, but the intellectually intricate build does pay off. Once the evil makes itself known, Tafdrup leads us into a merciless resolution, perhaps the most unflinchingly shocking ending of any horror film this year.

Now playing in select theaters and available on Shudder on September 15th. 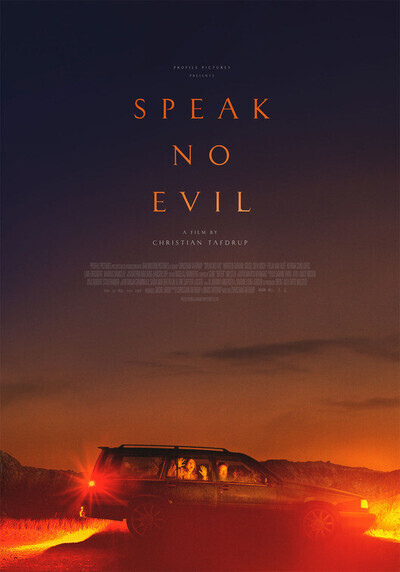