Calling "Space Station 76" a spoof of 1970s science fiction doesn't do the trick. It's quiet, slow movie that's often funny, sometimes sad, and occasionally uncomfortable. There are belly laughs, many of them concentrated in the office of a robot psychiatrist who barks shrink-speak at its patients; parts of this machine's sentences sound as if they were filled in with a recorded database of nouns, Mad Lib-style. ("How is your one CHILD?" "I'm upping your dosage of VALIUM.") But it's not trying to be another "Spaceballs" or a zero-gravity "Anchorman."   Even as "Space Station 76" serves up sketch-comedy style banter and splendid-ridiculous 70s costumes and sets (the hallways and rooms are lit with round-edged, quadrilateral panels) it never seems to be mocking its characters. It feels for them. Sometimes its heart breaks for them.

The script preserves the era's retrograde sexual politics along with its groovy designs. The title spacecraft's skipper, Captain Glenn (Patrick Wilson), is an alcoholic sexist. He's deep in the closet, too, which explains why he grimaces all the time and snaps at people. He promoted his last second-in-command to a plum job so suddenly that the whole station is speculating on his motives. When Glenn finds out that his new lieutenant is a kindhearted woman named Jessica Marlowe (Liv Tyler), he's so deflated that the filmmakers might as well have put a Sad Trombone noise on the soundtrack.

The gallery of supporting characters includes company employees, significant others, and one small child. All would've been right at home on a '70s soap opera. The chipper Misty (Marisa Coughlan) downs Valium the way other people eat Tic-Tacs, repeats '70s self-help slogans, and prides herself on her ability to "cook" (i.e., choose which items the station's automated chefs will put in the food machines). She's all but quit having sex with her husband Ted (Matt Bomer of TV’s “White Collar”), a technician who lost a hand in a space battle and replaced it with what looks like an aluminum mitten. Misty and Ted's daughter Sunshine (Kylie Rogers) buddies up to Jessica, who wants to have children but can't and looks perpetually bereft as a result. Misty is secretly having an affair with Steve (Jerry O'Connell), a horny man-boy whose wife Donna (Kali Rocha) just had a baby. It's that kind of space station.

The TV series "Space: 1999"—forgotten now by everyone but Martin Landau completists—seems seems to have been a visual influence, along with "Silent Running," "Logan's Run," the 1970s TV versions of "Buck Rogers" and "Battlestar Galactica," and anything else with jumpsuits. The starship footage is presented without sound, presumably out of respect for scientific accuracy, even as the characters smoke cigarettes, fetch food from futuristic automats, and tell robots to make them Harvey Wallbangers. The movie is a relic that was made just a couple of years ago.

"Space Station 76" is too comfortable with its near-plotlessness, its 94 minutes feel padded, and there are moments where it runs out of gas (rocket fuel?), yet the tone is so special that it turns what might've been aesthetic crimes in another film into misdemeanors. The scene where Glenn struggles not to admit that he can't accept a woman as an equal has that eerily poker-faced quality we associate with sci-fi movies from other time periods that congratulate themselves on being "advanced." (Almost every film's values become campy if you wait long enough.) This kind of genial joshing isn't enough to sustain an entire movie, but it has its charms, mainly because everything onscreen seems to have been put there not to score points or wring cheap laughs, but because somebody involved with the production had an itch that needed scratching. "Space Station 76" is one of those viewing experiences where you're often not sure if the artists are kidding, and if so, about what. Will Ferrell and Adam Sandler films have conditioned us to jeer at the sorts of flat, Wonder Bread-bland characters that populate the main cast, but you can't, because in their sitcommish way, they're suffering (especially Sunshine, whose big meltdown is heartrending).

That the movie is ten times lovelier than it needed to be confuses things further (delightfully so). The art direction, costumes, effects, lighting and camerawork are committed to beauty for beauty's sake, to the point where you might respond to "Space Station 76" not as a sendup of its sources but as a lucid cinematic dream about them. Adapted from a Los Angeles stage production (the script is credited to multiple writers) and made for a pittance, it's a handcrafted art object filled with surprising grace notes: meditative inserts of icy asteroids crashing soundlessly into each other; a shot of a shuttle zipping past two stars (one violet, the other velvet blue) that might be disco lights wreathed in smoke. During musical interludes scored to '70s pop, we move from character to character and watch them tryst and suffer and fail to connect, as if the movie secretly wants to be "Shampoo" or "Boogie Nights" in space but can't muster the nerve.

I have no idea who the audience for this film is, beyond the people who made it, and that's what makes it special. 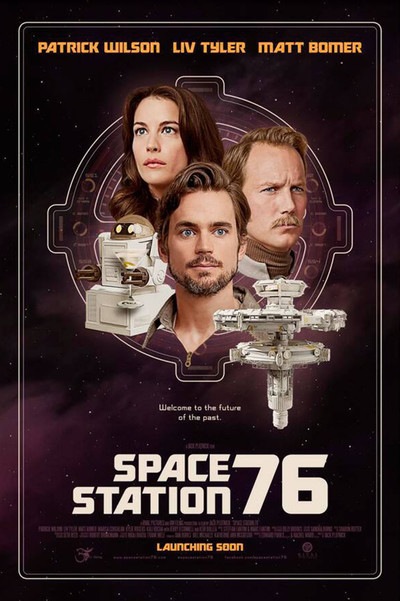