Pixar's "Soul" is about a jazz pianist who has a near-death experience and gets stuck in the afterlife, contemplating his choices and regretting the existence that he mostly took for granted. Pixar veteran Pete Docter is the credited co-director, alongside playwright and screenwriter Kemp Powers, who wrote Regina King's outstanding "One Night in Miami." Despite its weighty themes, the project has a light touch. A musician might liken "Soul" to an extended riff, or a five-finger exercise, which is very much in the spirit of jazz, an improvisation-centered art that's honorably and accurately depicted onscreen whenever Joe or another musician character starts to perform.

The prologue peaks with Joe (voiced by Jamie Foxx) falling into an open manhole and ending up comatose in a hospital. It's a bummer twist ending to a great day in which Joe was finally offered a staff job at his school, then nailed an audition with a visiting jazz legend named Dorothea Williams (Angela Bassett) who had invited him to play with her that night. After his near-lethal pratfall, Joe's soul is sent to the Great Beyond—basically a cosmic foyer with a long walkway, where souls line up before heading toward a white light. Joe isn't ready for The End, so he flees in the other direction, falls off the walkway, and ends up in a brightly colored yet still-purgatorial zone known as The Great Before.

The Great Before is a bit like the setting of Albert Brooks' metaphysical comedy "Defending Your Life." It has its own rules and procedures, and is part of a larger spiritual ecosystem wherein certain things have to happen for other things to happen. There's a touch of video game structure/plotting to the entire premise, and it's reinforced by the stylized drawing of Great Before characters in supervisory positions over mentors and proto-souls: they're two-dimensional, shape-shifting Cubist figures made of elegant neon lines.

The purpose of the Great Before is to mentor fresh souls so that they can discover a "spark" that will drive them to a happy and productive life down on earth. Joe is motivated mainly by a desire to avoid the white light and get back to earth somehow (and play that amazing gig he'd been waiting his whole life for), so he assumes the identity of an acclaimed Swedish psychologist and mentors a problem blip known only by her number, 22 (Tina Fey). Twenty-two is a blasé cynic who has rejected mentorship from some of the greatest figures in mortal history, including Carl Jung and Abraham Lincoln. Can Joe break the streak and help her find her purpose? Have you ever seen a Pixar film before? Of course. It's mainly about how things happen in these films, rarely about what happens.

That having been said, there's a nifty comic twist about halfway through the film that livens up "Soul" just when it was starting to drag, and it's best not to spoil it here (even though trailers and ads already have). Suffice to say that 22 eventually does find her spark, although it takes a lot of effort and more than a few wild misadventures to get there; and that Joe reexamines his years on earth as a genial but meek teacher and finds them wanting. He didn't make as many friends as he should have and was consumed by fears that he traded his childhood dream of becoming a working jazz artist for a more ordinary life. (Joe's mother, played by Phylicia Rashad, is not supportive of his music.) The downside is that this turns "Soul" into another of a string of animated films (including "The Princess and the Frog" and "Spies in Disguise") in which a rare Black leading character is transformed into something else for the majority of a film's running time.

Is this the first midlife crisis movie released by Pixar? Possibly, although Woody in the "Toy Story" films seemed to have a touch of that affliction as well. The movie is a bit shaggy and disorganized with its mythology/rules—something that Pixar is usually meticulous about, to the point of being obsessive. I'm not convinced it adds up to all much in the grand scheme by the time the final sequence arrives. The film's message could be summed up as, "Don't get so hung up on ambition that you forget to stop and smell the flowers." A birthday card could've told you that. And some of the jokes are a tad DreamWorksy, like the bit where a lost soul returns to earth and realizes that he's completely wasted his life by working in hedge funds; a ruthless international mega-corporation like Disney—which stuck most of its 20th Century Fox repertory holdings in a "vault" last year to push people to rent or purchase new Disney product, and that once sued day care centers for putting its characters on murals without permission—has no business lecturing anybody else about the moral emptiness of materialism.

And yet, "Cars" and its various derivatives aside, Pixar has never released a flat-out bad film. And this is a good one: pleasant and clever, with a generous heart, committed voice acting, and some of the kookiest images in Pixar history (including a ghostly, pink, land-bound pirate vessel belonging to a "mystic without borders," with tie-died sails, a peace symbol anchor, and Bob Dylan's "Subterranean Homesick Blues" blasting on a continuous loop). The company has been entrenched at the center of popular culture for decades, its reputation fortified by animated features that blend innovative design and graphics, lively physical and verbal comedy, impeccably staged action, and a sensibility that one of my old college film textbooks called "sprezzatura"—described in Baldassare Castiglione's 1528 The Book of the Courtier as " ... a certain nonchalance, so as to conceal all art, and make whatever one does or says seem to be without effort, and almost without any thought about it." In other words, Pixar makes it all look easy, even when hundreds of people worked on the project long enough to justify a "production babies" section of the end credits.

Despite feeling like rather minor Pixar overall, "Soul" will prove to be of historical interest because, despite the transformation issue, and when it isn't getting wrapped up in goofy afterlife shenanigans, it's the most unapologetically Black Pixar project yet released. Its portrayal of jazz is not only accurate in terms of its soundtrack of classic cuts and depiction of performance (the piano and trumpet playing is as correct as anything in Spike Lee's "Mo' Better Blues") but also its wider cultural context.

In a flashback, Joe's dad, who introduced him to jazz, describes the music as one of the greatest African-American contributions to world culture. There are many other touches in the film that testify to the story's anchoring in an experience beyond the white, middle-class suburban norms that Pixar embraces by default. There's even a visit to a Black barbershop showcasing an array of male hairstyles; a joke about the difficulty of a Black man hailing a taxi in New York City ("This would be hard even if I wasn't wearing a hospital gown!"); and a reference to Charles Drew, a Black physician credited with pioneering the blood transfusion. This distinction gives weight to lines that might not have registered in a Pixar film with white protagonists, such as 22's quip, "You can't crush a soul here. That's what life on earth is for."

Available on Disney+ on December 25. 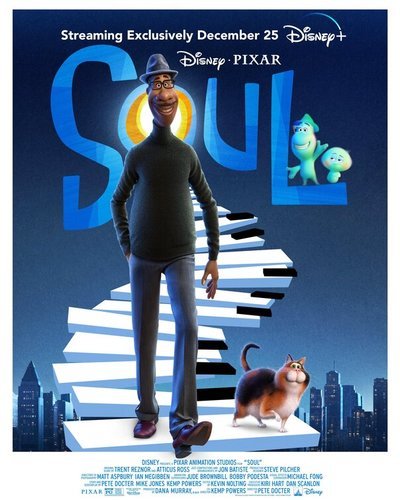 Writer (story and screenplay by)

Composer (jazz compositions and arrangements by)