The animated “Spies in Disguise” features Will Smith as the voice of an arrogant secret agent who accidentally gets turned into a pigeon—and finds he’s even better at his job in avian form. Sounds like lively and harmless holiday fun for the whole family, with a reliable and charismatic star at its center. Add Tom Holland as the voice of the sweetly quirky gadget guru responsible for Smith’s character’s transformation and the movie probably seems even more appealing. The Fresh Prince and Spider-Man, teaming up to fight evildoers: What’s not to like?

And sure, you could enjoy the film from Blue Sky Animation—the studio behind the “Ice Age” franchise—on a purely superficial, escapist level. The colors are vibrant, the lighting and shadows can be quite dramatic and the mere idea of Will Smith as an annoyed pigeon is good for a laugh. But there might be something deeper going on in the film from directors Nick Bruno and Troy Quane, working from a screenplay by Brad Copeland and Lloyd Taylor. “Spies in Disguise” might just be making a statement on our deeply fractured times, with its bad guy (Ben Mendelsohn) who threatens at a crucial moment: “You hit me hard, I hit back harder.” If you feel like you’ve heard this phrase recently, it also happens to have been President Trump’s guiding mantra since time immemorial. (Actually, Trump likes to say he hits back 10 times harder, just for good measure.)

Granted, animated movies take several years to develop. The folks behind “Spies in Disguise” couldn’t have known how polarized we’d be as a society when they started working on the film. (And their movie is actually inspired by a 2009 short cleverly titled “Pigeon: Impossible”.)

It’s hard to ignore the fact that Smith’s Lance Sterling views fighting fire with fire as his primary option when approaching global supervillains, while Holland’s pacifist tech expert Walter Beckett likes to create bombs that release glitter and “aww”-inducing images of kittens into the air. He wants to use his scientific mind to bring folks together rather than pull them apart. At one point, Walter even says, “There’s no good guys or bad guys. Just people.” And guess whose philosophy wins out in the end? Seems like a pretty clear message, or at least a relevant and necessary one.

Tying it all together, though, is a pretty standard, globetrotting spy tale featuring exotic locations, cool vehicles and gadgets, over-the-top action sequences and mismatched buddy antics. There are plenty of pratfalls for the youngest viewers to enjoy even before Lance becomes a winged version of himself. But it takes a little while for the film’s pacing to get going, and only really kicks into gear after Lance finds himself framed for treason while on a mission in Japan. He turns to Walter, the underling he’d dismissed, who also happens to be the one person who can help him clear his name; Walter, in turn, turns him into a pigeon as part of an experiment that goes horribly wrong.

But Lance finds that, while he can’t drive his tricked-out, super sporty Audi without opposable thumbs, he can still sneak around undetected in his feathered form. Here’s where “Spies in Disguise” takes on an appealingly off-kilter vibe as Lance reluctantly befriends other pigeons, with their googly eyes and waddly walks and affection for regurgitation. And the ways in which the pigeons work wonders as a flock—to the point of becoming playfully weaponized in the name of good—is consistently inspired.

Besides Smith and Holland, who have decent chemistry with each other, the solid supporting voice cast features Rashida Jones, Reba McEntire, Karen Gillan and Masi Oka. You could do worse with your family after opening holiday presents—and it might even give you something to talk about with your relatives of varying political persuasions. 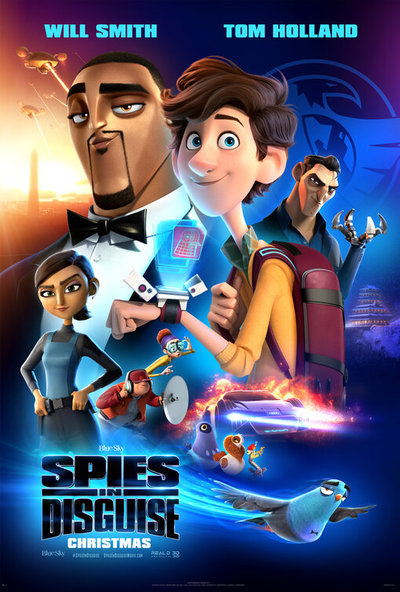 Will Smith as Lance Sterling (voice)