'Sleepover' is one big snore of a comedy

I take it as a rule of nature that all American high schools are ruled by a pack of snobs, led by a supremely confident young woman who is blonde, superficial, catty and ripe for public humiliation. This character is followed everywhere by two friends who worship her, and are a little bit shorter. Those schools also contain a group of friends who are not popular and do not think of themselves as pretty, although they are smarter, funnier and altogether more likeable than the catty-pack.

In the classic form of this formula, the reigning blonde dates a hunk who the mousy outcast has a crush on, and everything gets cleared up at the prom when the hunk realizes the mouse is the real beauty, while the evil nature of the popular girl is exposed in a sensationally embarrassing way.

"Sleepover," a lame and labored comedy, doesn't recycle this plot (the blonde gets dumped by her boyfriend) but works more as a series of riffs on the underlying themes. It moves the age group down a few years, so that the girls are all just entering high school. And it lowers the stakes -- instead of competing for the football captain, the rivals enter into a struggle over desirable seating in the school's outdoor lunchroom. Winners get the "popular" table, losers have to sit by the dumpster. That a school would locate a lunch area next to the garbage doesn't say much for its hygiene standards, but never mind.

Julie is the girl we're supposed to like. She's played by Alexa Vega, from "Spy Kids." Stacie (Sara Paxton) is the girl we're supposed to hate. Julie's posse includes Hannah (Mika Boorem), a good friend who is moving to Canada for no better reason, as far as I can tell, than to provide an attribute for a character with no other talking points; and Farrah (the wonderfully named Scout Taylor-Compton), who functions basically as an element useful to the cinematographer in composing groups of characters. Julie decides to have a sleepover, and at the last minute invites poor Yancy (the also wonderfully named Kallie Flynn Childress), who is plump and self-conscious about her weight. Julie's invitation is so condescending it's a form of insult, something that doesn't seem to occur to the grateful Yancy. Julie's mom, the wonderfully named Gabby (Jane Lynch), lays down rules for the sleepover, all of which will be violated by the end of the evening without anything being noticed by her dad Jay (Jeff Garlin), reinforcing the rule that the parents in teenage comedies would remain oblivious if their children moved the Ringling Bros., Barnum & Bailey Circus into their bedrooms.

Stacie, the popular one, visits the slumber party to suggest a scavenger hunt, with the winner to get the desirable lunch table. So it's up to the girls to sneak out of the house and snatch all the trophies, including of course the boxer shorts of the high school hunk. There is a tradition in which movie teenagers almost always have bedrooms with windows opening onto roofs, porches, trellises, etc., which function perfectly as escape routes when necessary, but collapse instantly (a) when used by an unpopular character or (b) when the risk of discovery and betrayal needs to be fabricated.

What happens during the scavenger hunt I will leave to you to discover, if you are so unwise as to attend this movie in a season when "Mean Girls" is still in theaters. One of the movie's strangest scenes has Julie, who is about 14, sneaking into a bar because the scavenger hunt requires her to get a photo of herself being treated to a drink by a grown-up. This scene is outrageous even if she orders a Shirley Temple, but is even weirder because the guy she chooses is a teacher from her junior high, who must live in a wonderland of his own since he obviously has no idea of the professional hazards involved in buying a drink in public for one of his barely pubescent students, and then posing for a photo so she will have proof.

I don't require all high school (or junior high) comedies to involve smart, imaginative, articulate future leaders. But I am grateful when the movie at least devises something interesting for them to do, or expresses empathy with their real natures. The characters in "Sleepover" are shadows of shadows, diluted from countless better, even marginally better, movies. There was no reason to make this movie, and no reason to see it. 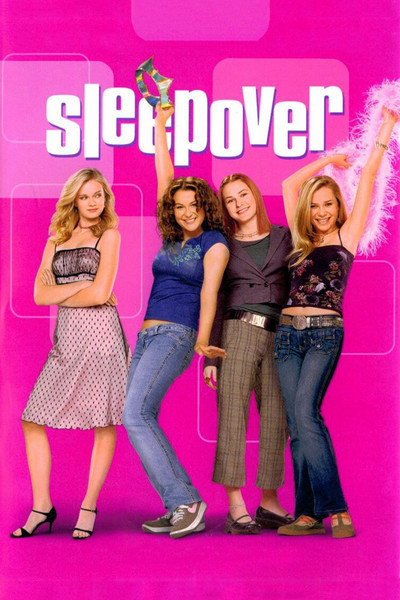