"Sleepless" is one of those movies that needed to be a lot better or a lot worse to make much of an impression. This story of a Las Vegas police officer trying to recover his kidnapped son from bad guys is frustratingly not-terrible. The action sequences, the characterizations, the performances, all could have come together to form a dandy example of what used to be a called a B-movie: a genre film that doesn't have much money to play with but compensates with ingenuity and style. And yet "Sleepless" somehow quite never gets to that level. Its rare moments of quality only make the rest of the movie—a mishmash of conspiratorial plotting and close-quarters fistfights and gunfights—seem lamer. As directed by Baran bo Odar (2010's "The Silence") and scripted by "World Trade Center" writer Andrea Berloff, this remake of the 2011 French film "Sleepless Night" is funny sometimes but not funny enough, exciting sometimes but never exciting enough, and inherently emotional (mainly due to the hero's anguished desire to save his son) yet never willing to run with the emotionalism and turn into a full-blown action melodrama.

The rest of the movie unfolds as an intimate, somewhat contained "Die Hard" variant, with Vincent sneaking around the grounds of the hotel and casino trying to save his boy. The more immediate task of preventing his son's death becomes a stand-in for the repair work he needs to do in his own household: Vincent is divorced from his wife Dena (Gabrielle Union) and on poor terms with Thomas due to his immersion in his job, and the theme of repairing frayed family bonds is never far from the movie's mind. There are also knotty complications involving the drugs that require Vincent to improvise further, and his already tense predicament is made worse by a stab wound he sustained during the opening action sequence: in between fistfights and clever moments of subterfuge, Vincent has to pause to redress the wound on his side. The latter provides "Sleepless" with many of its infrequent moments of humor: the hero is so immersed in the task of saving his son and recovering the stolen drugs without his superior officers finding out that his own adrenaline serves as a makeshift anesthetic. Both he and the audience tend to forget the pain he's enduring until the action lets up and he remembers that he's in agony.

There's a parallel plot involving Vincent's colleague, Detective Jennifer Bryant (Michelle Monaghan), who was recently beaten up during a drug bust gone awry. There are suggestions that the botched drug raid and Vincent's current situation are connected, and as Jennifer and her partner Doug Dennison (David Harbour) investigate the situation at the hotel, "Sleepless" turns into a somewhat conspiratorial thriller, with the heroes piecing together connections that lead them to realize their adversaries don't have the motives and goals they thought they did. I'm being intentionally vague here because, even though many of the film's twists are telegraphed long in advance, they're well-executed enough to give the movie jolts just when they're needed.

The film's major problem is its inability to settle on a tone and develop it throughout, or even from one scene to the next. It's dour but not grim or horrifying, and although there are enough Jason Bourne-style, heavily improvised fight scenes (including a couple of keepers staged, respectively, in a kitchen and a jacuzzi room) to distract from the knowing ludicrousness of the story, these action moments are executed in such a rote way (all fast cuts and swinging camerawork) that it's never possible to appreciate them on their own terms, much less find beauty or terror in them.

Foxx makes a fine action hero; he can do almost anything the movie requires of him, and his average guy demeanor here works up to a point. But it's still too easy to imagine another actor bringing something more to the role than Foxx can muster. A couple of decades ago, a somewhat edgier action star like Bruce Willis or Denzel Washington would've played the hell out of Vincent, infusing the movie with a nihilistic edge. The supporting cast boasts a couple of standout turns—McNairy and Harbour in particular, radiate 1940s tough-guy character actor vibes—but the entire cast is hampered by material that gives them just enough to construct playable characters but not enough to make them really sing. The movie also can't seem to make up its mind to be as realistic as possible (under the circumstances) or embrace the silliness and push it into the realm of the surreal. Some touches that might've been gloriously nutty in another film feel like mistakes here, such as the dispersal of tear gas in a key action scene filled by battling characters without gas masks: nobody seems to be affected by the chemicals, so it's as if the movie included it just to make the scene smoky and cool-looking.

"Sleepless" could've gone in many different directions, and a confident, focused director might have been able to turn the story into an action-packed neo-noir about cops and criminals on society's grimy fringes or perhaps a black comedy about men and women in way over their heads. There is something almost touchingly funny about Vincent's desperation: he's clearly a guy who's been gambling with his own life for quite a long time, and now finds himself trapped in a literal casino where the odds are against him; his anguish and shame are amplified by his knowledge that the house always wins.

But if this was the intention (and there are enough brazenly metaphorical aspects in the screenplay that we should probably assume that it was) it never comes through. Paradoxically, the movie might've stood out more if it had been aggressively trashy, obnoxious or dumb instead of merely professional but uninspired; at least then the audience wouldn't have spent much of the running time of "Sleepless" wondering if the filmmakers ever had anything more on their minds than setting up yet another variation on the long-running franchise "Taken," which wasn't deep and didn't pretend to be but nevertheless had an electrifying, sleazy nastiness that this movie lacks. 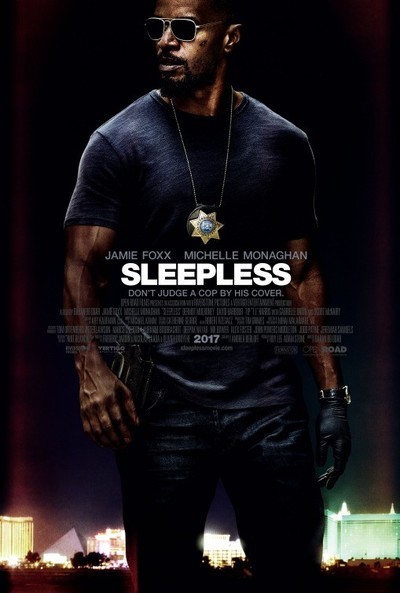