The signature promotional image of “Skyscraper,” the latest Dwayne Johnson summer extravaganza, features the charismatic blockbuster star hanging from a soaring building by only his left hand. His wedding ring gleams prominently in the foreground, illuminated by the deadly blaze that’s raging all around him.

The ring draws our attention as powerfully as the earnest intensity in his eyes, a reminder that—not unlike the “Fast & Furious” franchise in which Johnson figures so prominently—this story is all about #family. Mainly, though, it’s a mindless mash-up of “Die Hard” and “The Towering Inferno”: just intense enough to provide a much-needed diversion, just lightweight enough to make you forget about it soon after it’s over. It’s not exactly “good,” per se, but it does what it sets out to do in terms of putting us on edge, which makes it … successful?

But writer/director Rawson Marshall Thurber has attempted the problematic combination of making you feel good about bravery and resilience while also making you feel nothing about the countless bodies that get blown to bits in a hail of automatic gunfire. Many, many people die needlessly in this PG-13 spectacle in the name of thrills, maybe? Character development? The international cadre of criminals who take over a Hong Kong high-rise – the tallest structure in the world, three times the size of the Empire State Building – are clearly, singularly bad. Having them burst into people’s offices and obliterate them entirely—while the camera steers away from the bloodshed, per MPAA guidelines—feels gratuitous.

You’re not here to think, though. You’re here to have fun, and “Skyscraper” does indeed provide that in its many dizzying and death-defying action sequences. It’s the connective tissue between the daring stunts that’s flimsy.

But first: a flashback to 10 years ago. Johnson’s Will Sawyer is a highly trained Marine and FBI agent who’s in charge of a hostage negotiation that goes horribly wrong (another instance of placing characters in the midst of jarring, over-the-top violence). Having lost his left leg below the knee in that explosive incident, Will now serves as a security consultant. His latest job has taken him, his wife, Sarah (Neve Campbell), and their twins (McKenna Grace and Noah Cottrell) to Hong Kong, where he must analyze the safety of The Pearl before it opens. A shining, self-contained city, stretching 200-plus stories into the clouds, it’s the brainchild of billionaire Zhao Long Ji (Chin Han). Characters stand around and provide painfully clunky expository dialogue, all of which will matter at some point later, detailing the building’s many high-tech features.

Not for long, though. Thurber isn’t terribly interested in steadily building tension. “Skyscraper” kicks into gear pretty quickly and remains relentless. A team of villains, led by the menacing Kores Botha (Roland Moller), has broken in with highly flammable chemicals in order to steal the most McGuffiny of McGuffins. (They shouldn’t even have bothered explaining it, the item in question is so disproportionately insignificant compared to the mayhem it causes.) But when they torch the joint, they don’t realize that Will’s wife and kids are still inside one of the residential units. And as the flames rise higher and higher from what began as a thin, orange line on the 96th floor, the danger and the insanity climb with them.

Of course, because it’s Johnson playing this character, he’ll do whatever he must to save them, with each new obstacle that comes his way presenting a more ridiculous challenge than the last. But what’s novel about Johnson in this role is that he’s not completely indestructible. His character uses a prosthetic leg, and the film cleverly uses that as an asset, not an impediment.

Individual moments certainly stand out, with the staggeringly overqualified Robert Elswit (Paul Thomas Anderson’s usual cinematographer) placing us in the midst of the fiery madness. Will’s climb to the top of a 100-story crane and his leap across the night sky to The Pearl through a broken window is thrillingly staged. So is his use of duct tape to A) patch up his wounds before B) placing it on his hands and feet to Spider-Man his way across the glass exterior. (If you suffer from vertigo or have even the slightest fear of heights, this may not be the breezy escape you’re looking for this summer.) One of the more enjoyable parts of “Skyscraper”—and this was also true of “Die Hard”—is the way it makes us feel as if we’re figuring out the plan minute by minute alongside the far more capable hero on the screen. (Although my kid turned to me about three-fourths of the way through the screening and said: “I have a hard time believing this all happened in one day.”)

"Skyscraper" also provides a surprisingly solid role for Campbell; Sarah is never a damsel in distress, but rather a combat-trained surgeon capable of kicking her own allotment of butt while also caring for her kids. (She also speaks several Asian languages, which comes in handy throughout the film.) Imagine if she were the one tasked with saving the day, and her family, and the entire building. Now that would truly be thrilling. 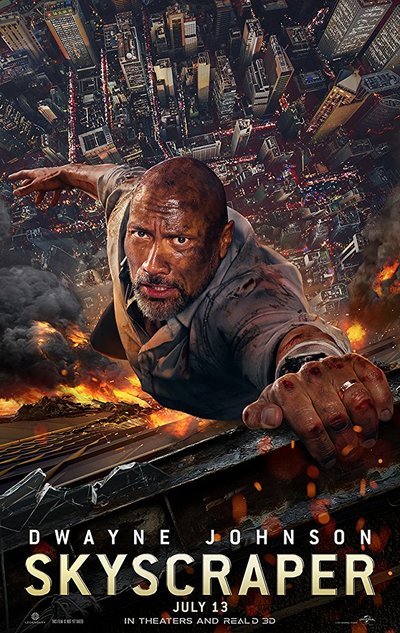 Rated PG-13 for sequences of gun violence and action, and for brief strong language.

Dwayne Johnson as Will Sawyer