Crystal Moselle's "Skate Kitchen," about a group of young female skateboarders in New York City, is a solid hangout movie as well as a band-of-buddies film—genres that tend to revolve around young men. It's also a movie that deliberately blurs the line between documentary and fiction: the main characters are all real New York skaters who are playing characters who are very close to themselves in real life.

Moselle's last film was the documentary "The Wolfpack," about a family that home schooled its seven children on New York's Lower East Side. It was a surprising and engrossing work, in large part because it had the confidence to turn the camera on its subjects and watch them being themselves, without getting too hung up on fitting everyone with psychological labels or treating them as if they were variations of familiar, fictional types. She demonstrates the same impulse with this dramatic feature, co-written by Jen Silverman and Aslihan Unaldi, which follows a Long Island teen, Camille (Rachelle Vinberg), as she tries to become her own person by hanging out with an all-girl group of big city skaters who roll through the streets, bantering and getting into scrapes and filming themselves for Instagram.

The movie is at its best in its early stages, when it's detailing Camille's attempts to get out from under the thumb of her well-meaning but suffocating mother (Elizabeth Rodriguez). Some of her tactics are ingenious: she keeps a store of photos of herself at the library to send to her mother to "prove" she's not skating, and has an elaborate system to hold onto her skateboard without being seen entering the house with it. The tension between Camille and her mother feels a bit contrived in order to inject conflict into a film that doesn't have much. Ditto the relationship that develops between Camille and Devon (Jaden Smith), the ex-boyfriend of her friend Janay (Dede Lovelace), which seems intended to make the film more commercial but mainly makes it feel more conventional.

Still, this is a hugely appealing movie that shows us people and places rarely captured in movies. "Skate Kitchen" has been compared to Larry Clark's "Kids," probably because the setting and age range of the main characters are the same, but it's a much less dire and alarmist film. Moselle seems to genuinely like every person who spends more than a minute in front of her lens, and the film takes liberating joy in the sight of young women zipping through traffic on their boards, executing flips, tending to injuries, bantering, and hanging on the backs of buses.

Vinberg is an appealing actress who doesn't overdo anything, and it's exciting to watch her listen and think, two things she does a lot while she's trying to fit in with her new group of friends who film their exploits around the city and hold their own against young male skaters who reflexively belittle them. The movie really cooks when it's hanging out with the girls and watching them carve out a space for themselves in a city that's indifferent or hostile towards them. 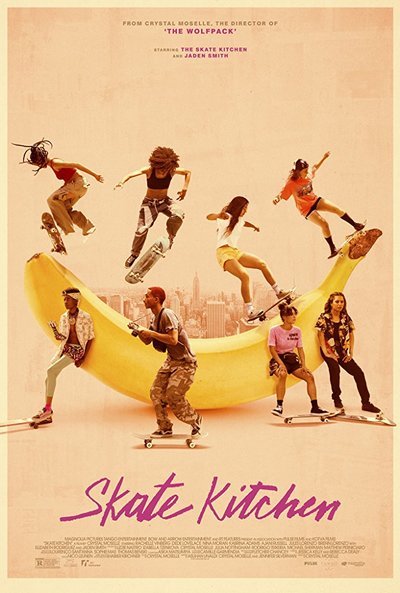