Flirting with a topical subject, like the ongoing viral pandemic, is simultaneously one of the smartest and most frustrating things a talented horror filmmaker can do. “Sick,” an exceptional new slasher pic, immediately loads viewers’ expectations with some statistics: in America, 273,880 COVID-19 cases had been reported by April 3rd, 2020, by which time 42 states had already issued stay-at-home orders in 97% of the country.

The rest of “Sick,” directed by genre craftsman John Hyams, is a straightforward chase movie set in a remote, dimly lit mansion. It takes a moment for the action to start—about 38 minutes—but once it does, this otherwise generic thriller’s flimsy relevance and unusual pacing not only seem more forgivable but maybe even sneakily clever.

The makers of “Sick” don’t waste time in messing with their audience. First, we follow Tyler (Joel Courtney) through the bare shelves of a Walmart-style big box store. A familiar but well-realized confrontation ensues: somebody’s watching Tyler, texting him from an unknown number and photographing him from just out of view. Tyler’s stalker wears a balaclava. He follows Tyler back to his apartment and tries to dispatch him with a big hunting knife.

Moreover, the pace of this opening scene has an unexpectedly varied rhythm, especially given its leisurely start. Before Tyler is attacked, we’re given ample time to soak up the dimmer-switch ambiance of his apartment, which is also jarring after the simultaneously vast and hyper-compartmentalized sterility of the above-mentioned Walmart clone.

The violence in this table-setting scene is also upsetting not only for its splattery brutality but for director Hyams’ merciless use of hard cuts on action, extreme (but coherent!) close-ups, and subtly disorienting long takes. It would be easy to overlook the polish and execution of this generic set-up, especially because Tyler disappears right afterward.

But Tyler’s not really out of the picture, though he is immediately supplanted by the real star of “Sick.” Parker (Gideon Adlon), a benignly self-absorbed university student, retreats to a secluded lake house with her loyal bestie Miri (Beth Million). Miri sighs and shrugs at Parker while Adlon’s bratty character avoids everything but the pursuit of simple pleasures: a tan during the day, a remote-controlled fire at night, and a joint with some finger foods before bed. Representatives of the outside world sometimes interrupt Parker’s vacation, but they’re nothing that she can’t handle. Like her clueless partner, DJ (Dylan Sprayberry), who follows Parker to the cabin without announcing himself. Or whoever’s sending Parker creepy texts from an unlisted number. Parker reminds DJ they’re in an open relationship because he’s desperately nervous about a suggestive Instagram post. Parker also blocks the mysterious texter. “Problem solved,” she says hopefully.

It’s not, of course, but that’s a good part of what makes “Sick” so thrilling: it’s a high-toned body count pic with instantly understood rules, as you might guess from the cryptic post-“Scream” text messages—“Wanna party?”—that both Tyler and Parker receive. (“Scream” screenwriter Kevin Williamson also has a co-writer credit on “Sick.”) And after about 38 minutes, DJ encounters another balaclava-wearing stalker, and this one’s just as relentless as the last. Blood flies, limbs tumble, and a frantic chase ensues. There are a few expected plot contrivances along the way, but if you’re thinking too hard about the integrity of WiFi and car tires, you’re probably not the right audience for this type of movie.

Hyams (“Universal Soldier: Day of Reckoning,” “Alone”) excels at stringing viewers along, immersing us in whatever room or outdoor setting that Parker and her friends fly through, and then occasionally snapping us out of our complacency with giddy violence. When I interviewed Hyams a few years ago, he told me that he thinks a movie only comes together in the editing room. “Sick” is more evidence for Hyams’ by-now standard theory. Williamson’s name may conjure certain associations, but this is Hyams’ show, an impressive showcase for vivid sound design, unsparingly hard cuts, and genuinely surprising violence. There are very few working genre filmmakers who consistently deliver enough cattle-prod jolts to keep you on the edge of your seat. Hyams is that good at setting viewers up just so he can repeatedly knock us down.

You might not enjoy “Sick” if you don’t, on some level, enjoy having your nose tweaked and your patience tested. There are a few scenes that, at first blush, seem both too long and distractingly thin. There’s also probably not enough plot or character-driven drama to make the movie’s pandemic-era timing seem like more than just a pretext for another yet meatgrinder thriller.

Then again, I don’t know if you need more from “Sick” than what Hyams and his team deliver, though some will surely want a more coherent political take given the balaclava kid’s provocative identity. Thankfully, this isn’t that kind of movie. “Sick” is exactly what it looks like, and a lot of mean-spirited fun at that. 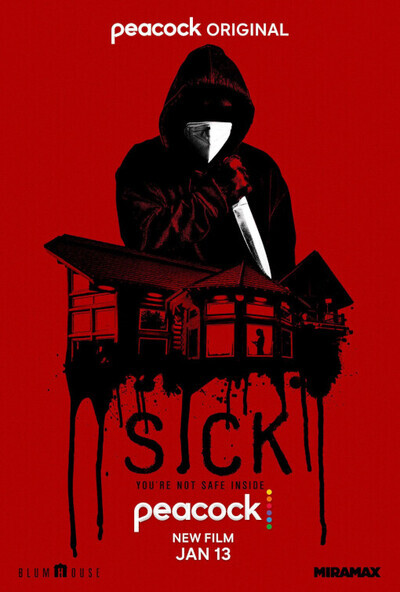 Rated R for strong violence, terror, language throughout and some drug use.