The first 30 minutes or so of John Hyams’ “Alone” are promising. Jessica (Jules Willcox) packs up her U-Haul trailer and moves out of Portland, Oregon for parts unknown. Whatever parts they are, they’re deep in the wilderness. Jessica is running from Something Traumatic, as befitting all protagonists in this kind of movie. Her father is concerned that she’s left a day earlier than expected so that she could avoid any kind of verbal skirmish with her mother. Her mother calls her repeatedly, and when Jessica finally answers, Mom’s whiny nagging explains why a confrontation was unwanted. No matter. We never find out where Jessica was going, because her plans get derailed.

You see, there’s a serial killer on the loose. He’s a goofy looking man with glasses and a push broom for a mustache. He reminded me of an older version of the Simpsons’ Ned Flanders, one who has done a lot of things that require repentance. You would think the filmmakers went for this rather Everyman look to distract victims from his villainy, but the guy known as Man in the credits (Marc Menchaca) never once acts anything other than creepy. In his first in-person interaction with Jessica, he asks where she’s going, tries to engage her in conversations unbecoming of strangers and then points out that he was driving the Jeep Grand Cherokee that almost got her killed when she tried to pass him a few miles back. I hope Jeep got paid well for this particular product placement. I hope U-Haul did too, because when Jessica’s trailer gets a flat, Man shows up to beat her senseless, drug, and kidnap her. Jessica wakes up in an empty basement room conveniently fitted with a lovely beam of sunlight streaming through the barred up windows.

So far so good for a thriller. There’s even a halfway decent moment of suspense where Man torments Jessica about the devastating event that sent her packing. When Jessica pleads for her life, Man asks “do you think you’re the first person who’s done this?” It’s the last time Man will seem scary, which is a shame because the movie’s barely one-third over. We’re spared any torture or sexual assault, thank goodness, and Jessica easily escapes from Man. This occurs after Jessica overhears Man talking to Wife and Daughter on his cell phone. Screenwriter Mattias Olsson really wants to lean into the idea that Man is living a secret life, but honestly, why should I be impressed by this? “Dark, murderous secrets kept from families” is covered in Serial Killer 101 on the first day of class.

Any genre goodwill generated by Hyams’ assured direction and pacing is lost when the film introduces another character, Robert (Anthony Heald). Robert is stupid, as all characters like him are in this type of picture. Before he shows up, Jessica suffers a gruesome foot injury while running from Man, so I expected “Alone” to become a battle of wills between the two out in the big, bad wilderness. Eventually, it does, which makes Robert not only completely extraneous, but also living proof that a good guy with a gun doesn’t stop anything.

The dialogue Man is given to speak is atrocious. When the film catches him monologuing while trying to flush Jessica out of the darkness, his attempts at psychological torture sound amateurish and paltry. It’s to Wilcox’s credit that she so ably plays mental distress that she almost saves the scene. But when Man says, in the dullest voice possible, that “I’m gonna get you, you delicious f--king b---h!” my suspension of belief dissolved completely. And that’s before we get to the deus ex machina helicopter and the climactic phone call which, believe it or not, isn’t to the police.

“Alone” gives us little reason to care if our hero makes it out alive, but I have to give credit where it’s due: Jessica isn’t written as some damsel in distress. Though she does make a questionable choice or two, she’s more crafty and engaged than a standard victim. There’s a scene where she temporarily gets the upper hand with a tire iron, and when she crawls away, she has the good sense to take that tire iron with her. I laughed, because I didn’t think she would do that. It showed a true survival instinct. There’s also a scene where a potential savior, when faced with believing Jessica or Man, sides with the killer simply because Man convinces him Jessica is hysterical. I might be completely wrong in my reading of the scene as a statement on the patriarchy, but I appreciated the sting of the moment nonetheless. It gave me something to think about as the movie limped to its conclusion. 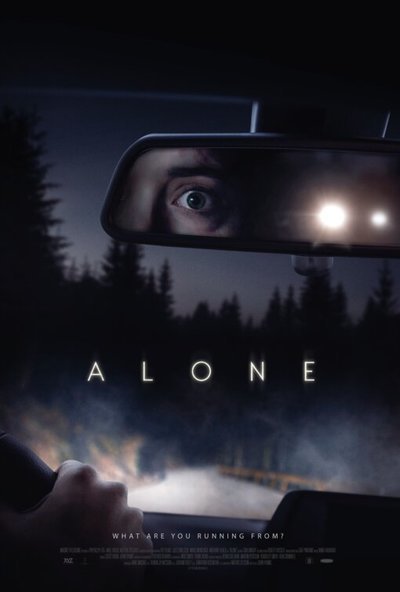