“Sharky’s Machine” contains all of the ingredients of a tough, violent, cynical big-city cop movie, but what makes it intriguing is the way the Burt Reynolds character plays against those conventions. His name is Sharky. As the movie opens, he's an undercover narcotics cop. He blows a big case and is demoted to the vice squad--which is a bawdy, brawling, vocal gang of misfits who act like a cross between "Hill Street Blues" and a Joseph Wambaugh nightmare.

Sharky is not happy in vice. He is, in fact, not happy anywhere, not until a young woman named Dominoe enters his life. She is a hooker. She also seems to be involved with some snaky big-money characters, and so Sharky places her under twenty-four hour surveillance. That involves moving several cops, telescopes, cameras, and bugging devices into the high-rise opposite her apartment. The cops set up housekeeping and settle down for a long wait. And it's here that the movie begins to really involve us. Reynolds, as Sharky, falls in love with the woman. It is a voyeuristic love, involving spying and eavesdropping, and Sharky is not a voyeur--so it is particularly painful for him to witness the woman's sexual involvement with others.

The central scenes of the movie, involving the call girl's private life and the probing eyes of Sharky, could easily have become tawdry--could have disintegrated into a peep show. That doesn't happen, partly because Reynolds (who also directed the film) doesn't provide cheap displays of flesh, but also because the call girl is played by British actress Rachel Ward, who brings poignancy and restraint to the role. She plays a hooker who's not a tramp. She has a husky voice and an astonishing body, but there's an innocence in her manner. Later, we discover that she has been in virtual bondage to her pimp since she was an infant. She knows no other life. This is a setup of sorts, a device in the plot to allow the female lead to be both prostitute and victim, but it clarifies the relationship between Reynolds and Ward. And when they fall in love, as they inevitably do, it provides some leftover innocence to be celebrated.

Reynolds surrounds this central relationship with a lot of cops, known as Sharky's Machine. They are played by actors who have played a lot of other cops in a lot of other movies--Brian Keith, Charles Durning--and by Bernie Casey, who is playing his first cop but does it with special grace. There's a long scene in the film, reportedly improvised, in which Casey tells Reynolds what it felt like, the first time he was shot. We are reminded that cops in the movies hardly ever talk about being shot.

“Sharky’s Machine” has a lot of plot, most of it inspired by the original novel by William Diehl. Maybe it has too much plot for a movie that Reynolds has referred to as Dirty Harry Goes to Atlanta. But this is an ambitious film; it's as if something inside Reynolds was chafing at the insipid roles he was playing in one car-chase movie after another. He doesn't walk through this movie, and he doesn't allow himself the cozy little touches that break the mood while they're letting the audience know how much fun Burt is having.

The result of his ambition and restraint is a movie much more interesting than most cop thrillers. “Sharky’s Machine” does have a lot of action, including an extended, exhausting, brutal shoot-out at the end. But it also has the special qualities of the relationship between Reynolds and Ward (more fully developed than the camaraderie between Reynolds and Catherine Deneuve, as another hooker in another thriller, “Hustle,” in 1974). As a director, Reynolds allows himself a few excesses (one howler is the dramatic cut from a sex scene to the phallic glory of the Peachtree Plaza Hotel). But he's put a lot of his ambition in this movie, and it reminds us that there is a fine actor within the star of “The Cannonball Run.” 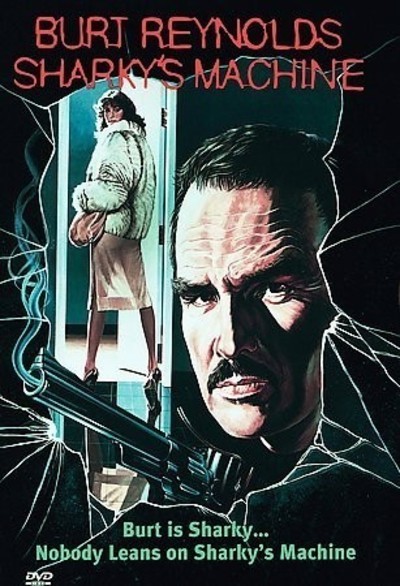