“The Cannonball Run” is an abdication of artistic responsibility at the lowest possible level of ambition. In other words, they didn't even care enough to make a good lousy movie. “Cannonball” was probably always intended as junk, as an easy exploitation picture. But it's possible to bring some sense of style and humor even to grade-zilch material. This movie doesn't even seem to be trying.

Burt Reynolds sleepwalks through a role he's played several times before, but never so indifferently. He's a hotshot driver in a big, illegal cross-country road race; first one to California wins. That means Reynolds gets to drink a lot of beer, talk like a good ol' boy, and get in the middle of a lot of crashes and other stunts.

The movie was directed by Hal Needham, a onetime stuntman who graduated to directing with “Smokey And The Bandit” (1977), the first and still the best of the Burt Reynolds car-chase movies. After that, each Needham movie has been worse than the one preceding it. His downward spiral has included “Hooper,” “The Villain,” and “Smoke And The Bandit II.” Movie buffs will note that three of Needham's four movies have starred Burt Reynolds, one of the most important properties in Hollywood. Reynolds is so popular he can make money in almost anything, a maxim that “Cannonball Run” puts to the extreme test. Reynolds and Needham are friends, and indeed the whole cast of “Cannonball” seems to consider the movie a reunion.

The film ends with outtakes spoiled shots during which somebody breaks up or says the wrong line or otherwise goofs. It's supposed to show us how much fun everybody had. Alas, the outtakes don't look much more goofy than the takes they intended to put in the movie; “Cannonball” assembles a giant cast around an absolutely minimal amount of screenplay, and allows them to kill time expensively. There's not much plot and no suspense. The filmmakers' excuse, no doubt, is that they were really making a comedy, not a road race picture. That would work if there were any laughs in the movie.

But just look at the cast. It's like a cattle call. It's like an Actor's Guild picket line. It's like Hollywood Squares on Wheels. Some of the actors are talented, some are not, but they look equally awful in this movie. At one time or another during this unspeakable experience, you can share it with not only Burt Reynolds but also Roger Moore, Farrah Fawcett, Dom De Luise, Dean Martin (looking as if a big-a pizza pie hit him straight in the eye), Sammy Davis, Jr. (looking like a severe case of vitamin deficiency), Jack Elam, Adrienne Barbeau (whose role consists of unzipping her jump suit), Terry Bradshaw, Jackie Chan, Bert Convy, Jamie Farr, Peter Fonda (as an aging Hells Angel), Michael Hui, Bianca Jagger, Molly Picon, Jimmy "The Greek" Snyder, and Mel Tillis. This isn't a cast, it's the answer to a double acrostic. 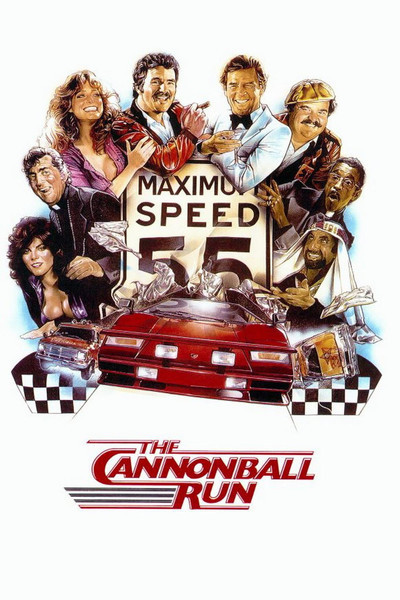