The NYC critics’ screening of 2019’s “Shaft” occurred in the most appropriate place imaginable, Times Square. It was here, 48 years ago, that John Shaft (Richard Roundtree) took viewers on a walking tour underscored by Isaac Hayes’ Oscar-winning title song. A strong, sexy, virile and smart Black man created by “The French Connection” screenwriter, Ernest Tidyman, Shaft became an inspiration for folks like yours truly. As a kid, I wanted to grow up to be John Shaft. He’s the star of three original movies, survivor of a 2000 remake by John Singleton and co-owner of a CBS TV mystery wheel schedule with Jimmy Stewart. In fact, Roundtree’s Shaft is the longest-running Black character in cinema history. Granted, he wasn’t the first Black man to be given two sequels—that honor goes to Sidney Poitier’s Mr. Virgil Tibbs—but he’s so popular that even when his namesake has been rebooted by Samuel L. Jackson, Roundtree shows up to remind viewers who the real John Shaft is.

Director Tim Story’s current take on this character also features Samuel L. Jackson and Richard Roundtree as owners of the surname Shaft, but unlike Singleton’s version, which paid tribute to Roundtree by making him Jackson’s uncle (and giving him a memorable exit accompanied by two lovely ladies), the 2019 version retrofits Roundtree as Jackson’s father and thrusts him into the action. This is the first in a slew of bad ideas, each and every one of them fatal. Nowhere in Ike’s theme song did he mention John Shaft was a deadbeat dad who begat an equally deadbeat dad. He’s supposed to be a “bad mother shut yo mouth,” not a bad father. At least Shaft Jr. (Jackson) has an excuse for exiting his son’s life; a pre-credits sequence shows the infant being caught in the crossfire between Junior and his enemies.

This hurtful stereotype of African-American fathers is a major plot point in “Shaft,” for we have to deal with YET ANOTHER guy named John Shaft, Junior’s son (Jesse T. Usher). Since there are so many damn John Shafts in this movie, I shall henceforth refer to Usher’s character as Baby Shaft. Unlike his absentee father and grandfather (the latter of which has never seen him), Baby Shaft is a non-violent sort who works for The Man. He’s an FBI data analyst, probably the best in the business. The fact that he’s gawky and not as outwardly tough and macho as his lineage requires is attributed, quite offensively, to the fact that he was raised solely by his mother, Maya Babanikos (Regina Hall, who is shockingly bad here).

Several times in the film, Shaft Jr. will spout “your Mama did to you” whenever Baby Shaft does something he deems “soft.” Shaft Jr. also constantly questions his son’s sexuality as part of this film’s raging streak of virulent homophobia. It pops up in Baby Shaft’s boss’ dialogue (“I have a 7-year old daughter who wants to be called Frank!” he complains) and in numerous jokes about a veterans’ assistance program called “Brothers Watching Brothers.” Because, as Shaft Jr. repeatedly implies, brothers only watch each other if they’re sexually interested. Unless you enjoy shooting people, fighting and chasing one-night stand female ass with impunity, you’re a homosexual in this movie’s ideology. And that’s a bad thing, of course.

But I digress. Baby Shaft seeks out his father’s help after his lifelong friend Karim (Avan Jogia) is found dead of an overdose in front of a drug den in Harlem. Their mutual friend, Dr. Sasha (Alexandra Shipp) determines that Karim could not have accidentally ingested the amount of heroin found in his system according to the documents B.S. was able to get by hacking into the police computer. These skills, and the admittedly preppy way B.S. dresses, will come under scrutiny by his Dad for being too White. So, now we can add the “wannabe White/not keepin’ it real” nonsense to the film’s growing list of harmful stereotypes of Black men. Mark your bingo cards accordingly.

When B.S. seeks out Shaft Jr. at his office, a naked woman answers the door. “You lookin’ for Shaft,” she asks the stunned young man. When he appears, Shaft Jr.’s mouth and goatee are covered in something that indicates that he was using SWV’s definition of going downtown. I suppose this compensates for Jackson not getting any action at all in Singleton’s version. “Shaft” may be sexist as hell in that its women are either angry, foul mouthed shrews, damsels in distress or sex objects willing to put up with trifling male behavior, but at least its hero is concerned about getting his women off. After all, his slogan is “it’s your duty to please that booty.”

The script by Alex Barnow and Kenya Barris of “black-ish” fame forces Sam Jackson to try so hard to relay a toughness that Roundtree did so effortlessly. The filmmakers don’t trust Jackson’s considerable ability to convey menace subtly. His voice, one of his greatest tools in this regard, is never employed. Think back to his Jules in “Pulp Fiction” saying “check out the brain on Brett.” Instead, Jackson’s Shaft is an overcompensating sadist who spouts Black Hotep horseshit that the film takes as sacredly as tablets from Mount Sinai. “Women like a man to take control!” he repeatedly tells his son. The one time Shaft Jr. actually attempts to treat a woman on the same level as a man, the film shames him for it. The only tough woman in this picture, Bennie Rodriguez (Luna Lauren Velez), is ready to scrap with Shaft Jr. (and probably beat his ass) but B.S. intervenes, citing that you can’t hit a woman, even in self-defense. This is what passes for wokeness here. We can’t even get a fight with the film’s only charismatic and tough villain because she’s a woman.

You’re probably wondering where Richard Roundtree is in this review. He shows up 15 minutes before the end of “Shaft.” Even with a snow white beard and a hat that makes him look like Papa Smurf, Roundtree oozes sexiness. He’s still charming as hell and could convincingly fend for himself in the fighting department. Despite being only six years younger than Roundtree, Jackson is more raggedy. “You look older than me!” Original Shaft says to his son. The fact that Roundtree’s presence is so overpowering just proves we didn’t need the other two Shafts in this movie at all. Adding insult to injury, Original Shaft doesn’t get too much to do besides be some kind of spiritual Yoda opening the door for more sequels that I pray never come.

The plot is completely forgettable and Story’s direction is atrocious here. He can’t balance the numerous attempts at unfunny comedy with the sudden outbursts of extreme gunplay. The action sequences lack any sense of excitement and only once do the stars of comedy and action align. It’s when B.S. shows off his unorthodox fighting skills at a nightclub. But remember, only the men get the good action moments! When Sasha pulls her own gun, she’s not even allowed to use it. She has to give it to a man who, until this point, has been squeamishly gun-averse. Eventually, she’s kidnapped and has to be rescued by the Shaft Family.

The most exciting moment at the screening I attended happened before the movie was projected. A rat made an unscheduled appearance in the theater, causing a fair amount of bedlam in the audience. Its appearance was as on-the-nose symbolic as the rat at the end of “The Departed.” Except here, Cinema Rat was trying to tell us that this sexist, homophobic garbage belongs in a sewer. Gordon Parks’ “Shaft” may not have been the most progressive movie by today’s standards, but it at least gave its women and gay characters some autonomy and treated them better than this astonishingly bad reboot. This movie is “ruin your childhood” bad, right down to the hideous auto-tuned end credits song they chose to use instead of the original “Theme From Shaft.” I say this flick Shaft is a bad movie. Shut yo’ mouth. 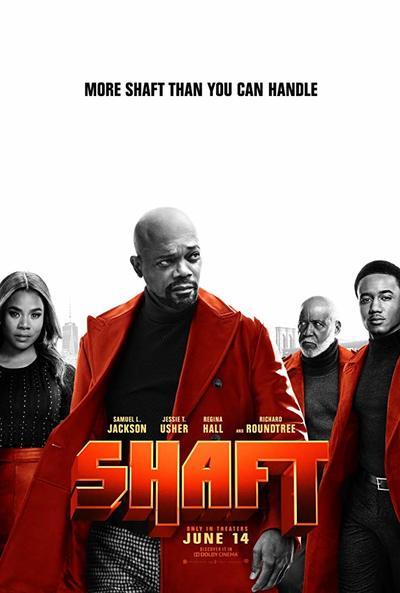 Writer (based upon the character John Shaft from the novel by)