“Senior Year” takes two high-concept premises—the going-back-to-high-school movie and the waking-up-from-a-coma movie—and slams them together in an intermittently amusing but mostly obvious comedy.

It’s a decent vehicle for the bawdy charms of Rebel Wilson, who continues to establish herself as an appealing comic lead beyond being a reliably irreverent sidekick. And one of the more inspired choices is the casting of Angourie Rice as Wilson’s teenage self; she actually gets to be Australian, which is unusual, and she accurately channels Wilson’s sly, deadpan delivery.

Both actresses are up for all the wacky hijinks the movie asks of them, which is why “Senior Year” feels like such a waste of both of their talents. The feature filmmaking debut from TV veteran Alex Hardcastle plays like a list of early 2000s references brought energetically to life. Too often, the film feels like two hours of that Leonardo DiCaprio pointing-at-the-TV meme from “Once Upon a Time ... in Hollywood.” Mentions of CK1 cologne, Smirnoff Ice and Von Dutch jeans and needle drops from the likes of Nelly and Avril Lavigne do put you right back in a specific pop culture era. (Although the way “Senior Year” uses the Mandy Moore hit “Candy” provides one of the film’s biggest laughs.) But there’s not much fresh insight into this particular period of post-millennium flux, or into the timeless and toxic lure of high school popularity.

That’s been the perky, blonde Stephanie’s obsessive quest since she moved to the United States from Australia as an awkward 14-year-old. With the advice she gets from teen magazines—“Three Pounds Is the Difference Between Hot and Obese” screams one headline—she gives herself a makeover, becomes captain of the cheerleading squad, dates the vapid football player, and sets her sights on the ultimate goal: being crowned prom queen.

“If they were this amazing in high school, imagine how perfect the rest of their lives would be,” Stephanie gushes as she stalks the pretty, young married couple down the street who were prom king and queen in their day. This is a genuine nugget of truth in the script from Andrew Knauer, Arthur Pielli, and Brandon Scott Jones: the super-popular people tend to peak in high school, then stick around town to continue feeling like big fish in a small pond.

But Stephanie’s dreams are dashed when a daring aerial stunt goes horribly wrong at a pep rally. Was her rival and fellow cheerleader Tiffany to blame? Whatever the cause, Stephanie winds up in the hospital in a coma for 20 years. When she wakes up, it’s suddenly 2022 and she’s baffled by iPhones and flat screen TVs. Her sweet, widower father (Chris Parnell) has kept her childhood bedroom intact (complete with “Clueless” and P!nk posters) all this time. And even though she’s now 37 years old, her first instinct is to return to high school and fulfill her destiny of becoming prom queen.

A newly trim and fit Wilson pulls on the cheerleader uniform and poufy, green ponytail bow and jumps into all the fish-out-of-water antics. She delivers the shock of her culture gap not with wide-eyed histrionics but with her trademark understatement. But because that’s such clever and consistently entertaining approach, it makes you wish she had wittier things to say beyond marveling at how many “Fast and Furious” movies have come out over the past two decades.

Still, Wilson enjoys a lively chemistry with Mary Holland (“Happiest Season”) and Sam Richardson (“Veep”) as the two misfit friends who’ve stuck by Stephanie all this time. (Holland in particular has terrific comic timing.) Justin Hartley shows up as the hunky, grown-up version of her high school boyfriend, who’s now married to mean-girl Tiffany (Zoë Chao). It’s a strong supporting cast, which makes it frustrating that they don’t get much to play beyond a couple of character traits.

And if “Senior Year” is trying to say anything at all about how different things are for young people now, it’s not doing so with much force or clarity. Stephanie is devastated to discover that in an effort to offend no one and make everyone feel included, her old high school has no more popular kids or cliquey cafeteria tables, no more suggestive cheer routines and—worst of all—no more prom king and queen. This is the era in which everyone gets a trophy, and people love you if you post on social media about how passionate you are about environment. Is “Senior Year” mocking this cultural shift as a bad thing, as performative “wokeness,” to borrow a reductive phrase? Or championing it as the necessary evolution from an archaic way of thinking?

Doesn’t matter, really. As long as the script includes the usual cross-promotional references to shows like “Bridgerton” and “Tiger King,” it’ll fit in just fine with the cool kids at Netflix. 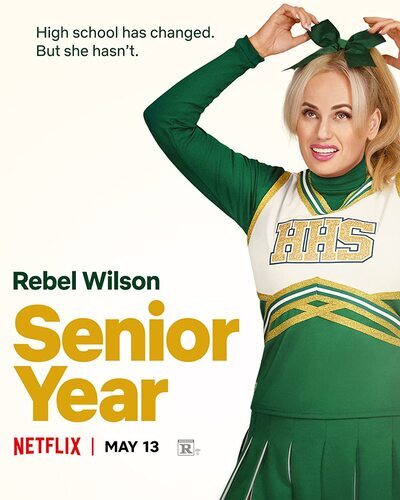