In a realistic world, a typical couple wouldn’t exchange overtly explanatory lines amongst themselves in private and say things such as, “I know how you feel about Christmas because you lost your parents then.” Unless of course they are somehow more concerned about informing some imaginary onlookers on their emotional state and personal history than, you know, being two real people who naturally ease into each other’s loving company. And yet, this descriptive line is exactly what gets muttered early on between the central romantic duo Harper (Mackenzie Davis) and Abby (Kristen Stewart) in the generically vivid holiday rom-com “Happiest Season.” It’s never a good sign when characters in a film promptly declare: we are aware you are watching and we’re here to teach you a thing or two.

Unfortunately, this self-aware attitude plagues much of “Happiest Season,” actor-turned-director Clea DuVall’s second narrative feature after 2016’s modest yet sharp relationship comedy “The Intervention,” a film that introduced the writer-director’s perceptive voice both on the page and behind the camera. Co-written by DuVall and her “Veep” co-star Mary Holland, “Happiest Season” puzzlingly doesn’t feature any of the incisiveness DuVall formerly came to prove as a storyteller. It’s almost as if the filmmaker thought that her movie—a mainstream, star-studded, studio holiday romp built around a gay couple—is virtuous and worthy enough in itself just by existing. Toppling a stereotypically straight and white genre does not make it beside the point whether an ensemble resembles people with recognizable human behavior.

To some degree, it’s impossible to not feel impressed by the audacity of DuVall, an openly gay woman herself, in wanting to tell an inclusive version of a Christmas story we’ve seen a million times before. By the same token, it’s disheartening that heterosexuality is still the default mode of this fare in a frequency that makes films like DuVall’s seem like small miracles. But those grounds alone aren’t enough to justify the overall clumsiness of “Happiest Season” when most of it looks unimaginatively lit and designed like a cookie-cutter holiday showroom, with scenes written in the tone of SNL sketches: absurd though not cleverly so, awkwardly humorless and curiously lifeless.

And yet all the staple shiny and cozy trimmings of the season—handsome decorations, crackling fires, twinkly lights and plenty of red and gold—still pleasantly deck the movie in which the mellow Abby and the boisterous Harper live happily together in their cozy apartment. One drunken night while they wait for the holiday break to commence, Harper gears up the courage to invite Abby to her family’s home for Christmas, her girlfriend’s general resistance to the festivities be damned. Abby accepts, with a diamond ring at the ready to pop the question to Harper over at her parents’ house. But little does she know that Harper isn’t out to her family yet—they think she’s bringing home her orphaned straight roommate who has nowhere else to go for Christmas.

When Harper finally admits the truth to Abby on the way, the young woman protests, but then eventually weighs and accepts the situation with an unusual amount of grace, keeping her pain at bay, understanding that the woman she is in love with isn’t ready to publicly own up to their relationship. If only I could tell you that Harper’s family at least makes it a bit easy for Abby to peacefully play along for a few days. But a manic and gauche atmosphere takes over at once, thanks to Harper’s image-crazy mother Tipper (Mary Steenburgen), politician father Ted (Victor Garber)—we never get to learn anything about his politics other than the fact that he’s running for mayor—and two nightmarish sisters: the exceedingly hostile, unhappily married Sloane (Alison Brie) and the caricaturized dutiful daughter Jane (Holland). In the meantime, none of DuVall and Holland’s attempts at comedy land. Then again, perhaps thoughtless people constantly reminding Abby about her parents’ death and inappropriately calling the orphan “needy” can’t ever be funny no matter how you spin it.

Abby’s time with Harper’s family recalls a “Meet the Parents” and “The Family Stone” hybrid of sorts, though without the genuine humor of the former and the darkly sophisticated wit of the latter. (Yes, holiday movies can be sophisticated, too.) In the following days, Abby does her best to not disappoint her confused girlfriend, who unforgivably keeps ignoring her, forcing her into tough, inconsiderate situations. Luckily, Aubrey Plaza’s Riley—a secret ex-girlfriend of Harper’s who also got her heart broken by her—enters the story as an ally, forming such a genuine sexual chemistry with Abby that you might find yourself rooting for a twist towards their eventual union.

But “Happiest Season” isn’t that kind of movie, not one that would allow the story to reveal itself in a way that feels organic. What we are instead left with is a forced happy ending, juvenile lessons about family and the underutilized “Schitt’s Creek” creator Dan Levy in the role of Abby’s gay best friend John, a character that solely exists to serve as a mouthpiece for the film’s thematic endeavors. The great Roger Ebert once said, “It's not what a movie is about, it's how it is about it.” “Happiest Season” focuses so much on the former that it forgets about the latter entirely. 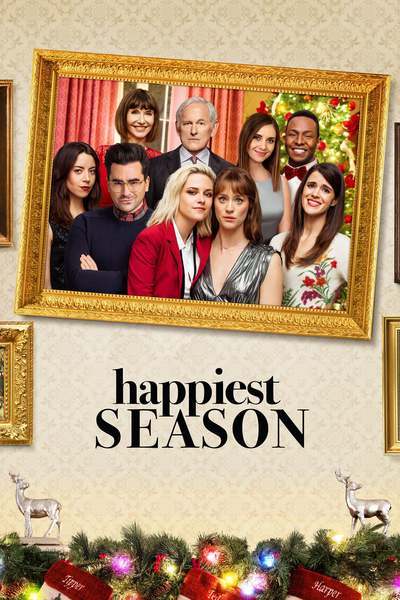