Your enjoyment of “See How They Run” will depend on your appreciation for its two most prominent elements. The first is the genre of the classic British murder mystery and the names associated with those who created them and those who parodied and meta-commented on them. And the second is the genre of meta-commentary itself. There are air quotes and winks at the audience in almost every scene. I’m fine with both, so since the movie is exceptionally well cast and stylishly filmed, I thought it was a hoot. But those who are not well-versed in Agatha Christie and the darkly comic British Kitchen Sink-era responses to her mysteries may find it so arch that it will make their fillings ache. Let me put it this way: If you know what The Mousetrap is, and especially if you’ve seen it performed, you’ll get a kick out of “See How They Run.” If you don’t recognize the title “The Real Inspector Hound” or if you are allergic to air quotes, maybe not. Consider yourself warned.

The Mousetrap, a play by Agatha Christie, is the longest-running play in history, opening in 1952 in London’s West End and, except for a pause during the pandemic, running ever since with over 28,000 performances. “See How They Run”—the title also connected to literary mice through the nursery rhyme—takes place around the celebration of the 100th performance of The Mousetrap, in 1953 London, when an American movie director named Leo Köpernick (Adrien Brody) has arrived as a producer is negotiating the film rights to the play.

Köpernick is a briefly anonymous off-stage narrator who tells us he has not seen The Mousetrap but he's sure it's a “second rate murder mystery.” If you’ve seen one, you’ve seen one seen them all, he says. They all begin with “an interminable prologue in which all the key players are introduced." You get a sense of the world they inhabit and then the most unlikable character gets bumped off. Cue the entrance of the "world-weary detective" who pokes his nose around, talks to witnesses, takes a couple of wrong turns, then gathers all the suspects together and points to the least likely. Köpernick is in London because he has been blacklisted in Hollywood, and he tells us he has been hired to make the movie marginally less boring than the play.

In the traditional British mystery, the first murder victim either has no enemies or is loathed by everyone. Köpernick is in that second category. He's murdered backstage, and, on cue, the world-weary, hard-drinking detective arrives, a WWII veteran with a limp. He is Inspector Stoppard (Sam Rockwell) and like other names in the film, this one is a meta-reference. The Real Inspector Hound is an early work by Oscar-winner Tom Stoppard, and, like this film, it's about a theatrical murder mystery and the people connected to it. Just to make sure we get it, at one point a character says, “He was a real hound, Inspector!” Other characters are named for Richard Attenborough, who was in the original cast of Mousetrap and played the killer in one of the other films referred to, and to "Downton Abbey"'s Julian Fellowes, who elegantly updated the classic British great house murder mystery in “Gosford Park.”

In keeping with the mid-century setting of the film, the screenplay is best described as “too clever by half.” This reaches its zenith when everyone somehow ends up at the home of Agatha Christie herself (for casual and non-fans, note that her real-life second husband, Max Mallowan, is played by Lucian Msamati), though the names and Dame Agatha’s interest in poisons are the only real-life connections.

It all speeds by briskly when it isn’t distracting us with lazy flashbacks and knee-slappers like calling a possible murder “staged” because it is literally on a stage. And the performance and production values are fun for British mystery fans, with Saoirse Ronan, as always, pure joy as the eager young Constable Stalker (those names!) and the cast clearly enjoying having fun with the conventions and archetypes of the genre. There are references to the serial killer film “10 Rillington Place” and, less successfully, to a gruesome real-life murder that may have inspired The Mousetrap. If all of this is sounding like too much work, you should probably stick with the original or with better meta-mysteries like “Knives Out” and its upcoming sequel “Glass Onion” and the wildly funny theatrical production The Play that Goes Wrong.

Still, all the stylishness and enthusiasm cannot disguise the fact that the mystery itself never comes close to those concocted by Dame Agatha. Then again, no one else has topped her either. 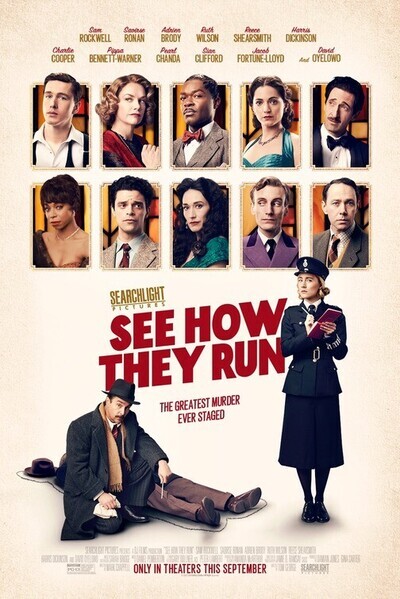 Rated PG-13 for some violence/bloody images and a sexual reference.