Secret in Their Eyes

There is a long tradition of Hollywood co-opting the plots of well-regarded foreign films and then snuffing out the very qualities that made the originals feel fresh, unique and eminently remake-able. While it might remove the need for those pesky subtitles, these Americanized versions too often erase such essential elements as logic, subtext and  the sense of cultural relevance that made the title a standout in the first place.

For every success like “The Departed,” based on Hong Kong’s “Infernal Affairs,” there are countless inferior reinterpretations that often count on star power to compensate for a watered-down rendition, regularly changed to a box-office-friendlier PG-13 instead of a more honest R rating.

I will never forget the first few months of 1993. That was the ultimate winter of foreign remake discontent, when moviegoers were cruelly subjected to “The Vanishing” (a debasement of the same-titled Dutch chiller by the same director, no less), “Sommersby” (which sucked much of the magic out of the French arthouse sensation “The Return of Martin Guerre”) and “Point of No Return” (sorry, Bridget Fonda, you are not nor will you ever be “La Femme Nikita”).

Well, they’ve done it again—and, sad to say, none too well—with “The Secret in Their Eyes,” 2010’s foreign-language Oscar winner from Argentina. A smartly done, haunting crime thriller, revolving around a brutal 1974 rape-murder investigation that is re-opened 25 years later, the film charts the effect that the unsatisfactory conclusion to the case had on both the legal team and the victim’s devoted husband. It's a reflection of the country’s rampant government corruption at the time.

The complicated “who, what, where, when and how” aspects were handled expertly, especially a scene staged in a massively crowded soccer stadium. But what truly distinguished this superb film were the intense emotional connections brought to life by actors Ricardo Darin and Soledad Villamil, who look and acted like real humans, not prettified facsimiles. The agonizing unrequited love between Darin's justice agent and Villamil's department chief colored every bittersweet second of “The Secret of Their Eyes,” down to the agonizing final moments.

Now we have “Secret in Their Eyes.” (That the “The” has been awkwardly ditched is just one in a pile of wrong-headed moves.) Instead of Buenos Aires, the setting is the least-glamorous portions of Los Angeles. Why L.A.? Because the flashback parts of the story now take place in 2002, when the city was thought to be the next likeliest target for a terrorist attack after 9/11. That leaves the door open for the cutting of many corners and questionable ethics in the name of security but also proves to be a distraction from the core plot.

More damaging are the casting choices. Let’s start with the A-listers onscreen, beginning with Julia Roberts. There is nothing inherently wrong with changing the gender of the character that is related to the young female victim. Except that the connection involved—mother-and-daughter—no longer provides the same sort of echo of the unrequited love angle. That the parent is an FBI investigator initially directly involved in the case makes matters too personal for her and her co-workers. As one character rightly notes, “We’re not just crossing the line, we’re burying it.” They also are disposing with believability as a result.

“Secret in Their Eyes” also requires Roberts, who is kept at bay through much of the movie save for several  showy outbursts and the twist ending, to turn down her star wattage considerably even before she is grief-stricken. Anyone who recalls Roberts in “Mary Reilly” as Dr. Jekyll’s plain-Jane servant knows how well her fans take to a cinematic frump-over of their idol.

Meanwhile, Nicole Kidman as Roberts’ district attorney boss has a few strong scenes, including one with intensely sexual overtones, as she strives to make finding the killer a priority despite the fact that the prime suspect is a source of intel on a terrorist cell linked to a local mosque. But she also has to be incandescent enough to cause Roberts’ fellow FBI investigator, played by Chiwetel Ejiofor, to gaze upon her like a googly-eyed schoolboy any time she slinks across his path. Too often Kidman, decked out in designer outfits as opposed to Roberts’ grunge garb, looks like she is floating through a perfume commercial.

As for Ejiofor, who mesmerized in “12 Years a Slave,” he is not the problem even if he has more chemistry with character actor Dean Norris as sidekick Bumpy than he does with either female cohort. Also fulfilling their duties well are Michael Kelly, who knows his way around white-collar weasels lately thanks to his memorable work as Doug Stamper on Netflix’s “House of Cards,” and Alfred Molina as Kidman’s blustery higher-up.

But although a surprising number of plot machinations from the original film remain fully intact, usually accounting for anything that seems remotely clever, what is missing is the type of hold-your-breath tension provided by good thrillers. Neither the camerawork nor the editing between 2002 and the current timeline manages to stir up much excitement. Billy Ray, an Oscar-nominated screenwriter for his “Captain Phillips” script, deftly directed the journalism-scandal biopic “Shattered Glass.” But he falls flat here.

It may be unfair to compare the Argentine version with this inferior one, since most people probably haven’t seen the first. But even when taken on its own terms, “Secret in Their Eyes” amounts to a disappointment. The real secret here: Reading subtitles is better than sitting through a weak imitation. 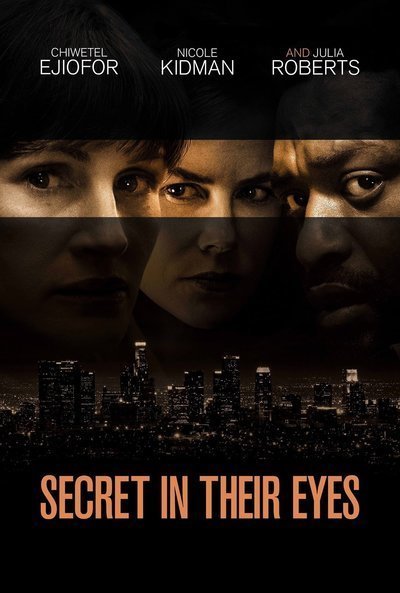