Even the boundless charms of Jennifer Lopez cannot overcome a mess of a script in “Second Act,” a mishmash that has as much of an identity crisis as its name-switching, past-hiding, resume-inflating main character. Perhaps there is a clue in the credits, where we learn that Lopez is the producer as well as the star. As is so often the case, here that means that the movie is more about what would be fun for Lopez to do than what would be fun for the audience to watch.

So Lopez casts herself as Maya, instantly and devotedly beloved by every other character, even when that throws the narrative out of whack. She is a “street smart” woman who can outshine all those think-they’re-all-that book-learnin’ types “who name their children after fruit and climb Mt. Kilmanjaro” if she just finds a way to believe in herself. And she casts her real-life wisecracking best friend (Leah Remini) as her movie wisecracking best friend and goes all Jenny-from-the-block at the beginning so Maya can get all glam with a makeover transformation.

This pretty little wish list may be enough for Lopez to ignore the most ridiculous details of the story, but it is not enough for us. Asking the audience to suspend disbelief for a movie is fine. Insulting us with obvious and sloppy details is not. So no problem with a Cinderella story where the fairy godmother is a tech-savvy teenager and the gown for the ball is a faked Ivy League resume and some Photoshopped images showing her with the Obamas and, yes, on top of Mt. Kilimanjaro. But it is a problem when the suspicious rival at her new job calls Harvard to see whether Maya actually was a student there, and it turns out that same tech-savvy teen somehow redirected the call to his own cell phone?

It is one thing when Maya’s years in retail give her an important perspective that could have been overlooked by the people in the big corporate offices. And maybe we can go along with the idea that a big corporation would hand a new hire a fancy apartment and batch of credit cards. And that a new skin care formula could be invented from scratch and made ready to market in a few months. But somehow Maya’s “street smarts” give her the unique ability to come up with just the right fully organic ingredient just in time to save the day. That is just too much and we haven’t even gotten to the un-twisty twist.

Maya has been working for twelve years at a big box store and is hoping for a promotion. But the executive job goes to the guy with an MBA, not the “street-smarts” woman with the GED. When her teenage godson creates an online persona for her that leads to a job offer from one of the store’s biggest suppliers, she decides to take it.

The boss (Treat Williams) sets up two teams, challenging them to come up with a better product, and puts his daughter, Zoe (Vanessa Hudgens) in charge of the safer bet. Maya is leading the long shot. And soon the whole street smarts/book smarts idea gets jettisoned in favor of a soapier, less interesting storyline.

The script has some funny lines and some great back up from Remini and a support group of Maya’s former colleagues and from Charlyne Yi and Annaleigh Ashford as Maya’s new assistants, who deserve their own movie. But out of desperation or laziness the movie resorts to two of the most overused comedy staples, a child using bad language and a dance number to a classic song (“Push It”).

Unlike Tess in “Working Girl,” a much better film that this one tries to borrow from, Maya has not actually done the work to get the credential or done the research to prove that she can add value. The film’s point of view is uncomfortably anti-educated people, if not anti-education entirely. While two young characters are urged to get college degrees, the movie portrays “street smarts” and instinct as more authentic and more valuable than the kind of dumb team-building exercises a person with an MBA would think worthwhile. School does have value; a teacher grading this script would have sent it back with corrections and insisted on another draft. 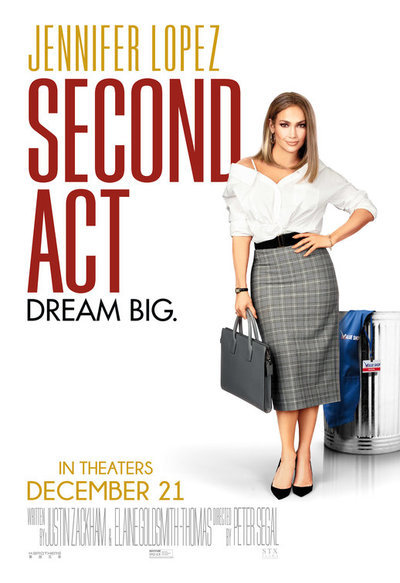 Rated PG-13 for some crude sexual references, and language.