Like many an actress before her, Jean Seberg headed to Hollywood with dreams of stardom, but once the talent contest winner of Marshalltown, Iowa, arrived in Tinseltown, it was anything but a dream. An accident on the set of her first movie scarred her. At first, success eluded her. Eventually, she headed to France to star in Jean-Luc Godard's “Breathless,” which would become one of the break-out films of the French New Wave. Finally, Seberg had made a name for herself, yet less than two decades after her 1960 international hit, she would be found dead in her car with suicide the probable culprit.

Seberg’s tragically brief story has been a source of curiosity since her death, especially after her second husband accused the FBI of playing a part in her demise. It’s that FBI connection that most interests Benedict Andrews’ new biopic, “Seberg.” However well-intentioned the effort to unearth Seberg’s legacy and open this shameful chapter in American history, the movie’s simplistic approach doesn’t quite do her memory justice. With a miscast lead actress and an underwritten script, Seberg feels as mysterious and distant as ever.

Although Kristen Stewart pulls off Seberg’s short haircut, she hardly embodies any of the presence or persona of the French New Wave “It” girl. Stewart’s monotonous delivery makes her character sound uninterested and bored, even though the movie wants to show how the actress grew into an activist—posing for pictures with members of the Black Panthers and funding their education initiatives—that would land her in the FBI’s crosshairs. Perhaps Andrews didn’t give her sharper directions or writers Joe Shrapnel and Anna Waterhouse’s clunky dialogue wouldn’t give her more to work with. In any case, the movie feels like it’s in search of its own pulse.

The script shortchanges Seberg in much the same way her contemporaries did. This was a young woman who was already donating to civil rights causes as a teenager yet the script includes a scene of the actress whining to her industry-minded manager that she wants to do something more meaningful with her life than just acting. She wasn’t someone in search of a purpose, but that’s how the script makes her sound. In another misstep, the script also included a conflicted FBI agent named Jack (Jack O'Connell) who seems highly contrived in order to give someone an arc in this story. He’s made a sympathetic character who regrets following his bosses’ (including J. Edgar Hoover) orders to wiretap, follow and spread false stories about Seberg to the press. It’s a weird decision by the filmmakers of Seberg’s story to try to exonerate the FBI who legally harassed a citizen to the point of paranoia.

But not everything about "Seberg" is in such dire shape. Rachel Morrison’s cinematography is by far one of the best things about it, as it has a clear range and showcases her ability to tell a story through its visual elements. At the beginning of “Seberg,” the movie has more of a pastel sheen, a reflection of the era and the unclouded nature of her story. As the FBI begins to get involved, more scenes take place at night, making everything around Seberg seem darker and more ominous. A few members of the supporting cast stand out like Anthony Mackie as Hakim Jamal, a charismatic and charming activist who Seberg begins an affair with, and Vince Vaughan as a cruel, uncaring FBI agent who sees nothing wrong with his organization’s orders to stalk and mess with Seberg. I wish I could say Margaret Qualley and Zazie Beetz were also given interesting roles, but unfortunately, they play wives whose primary function in the script is to be jealous of their husbands’ attention on Seberg.

The movie tries to position Seberg as an inspirational figure, a sainted martyr who tried to stand up against her country’s many wrongs and faced extreme retaliation for it. It’s not subtle about this comparison either, as it even includes a recreated scene of Seberg playing Joan of Arc in her first film where she was burned in an on-set accident. Yet, if our sympathies are supposed to belong to Seberg, why divest some of it into a “My Week with Marilyn”-type outsider gawking at the actress? Why tell the FBI’s side of the story at all?  “Seberg” joins a new subgenre of biopics like “My Week with Marilyn” or the more recent “Judy” which paints these fascinating actresses as victims of their own story, doomed to meet some sort of fame-induced end. This framing, while it may work for some, is tiresome from its predictability. While I’m glad more people will now hear about what happened to Seberg because of Stewart’s involvement and this movie, there’s certainly a better version of this story that has yet to be told. 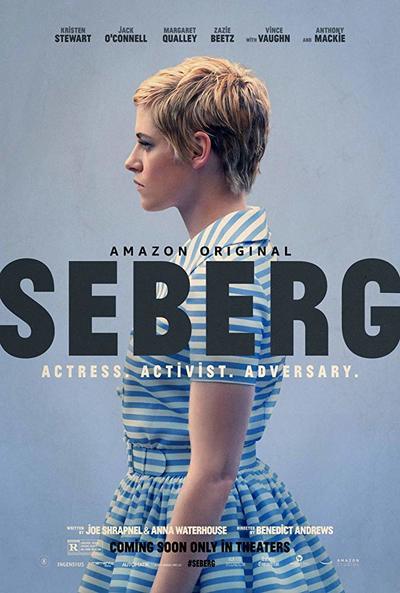