Written and directed by Simon Barrett, “Seance” uses many familiar themes and story beats to tell a so-so scary story. With leaden performances and puzzling camerawork, it’s hard to feel in tune with the movie’s frights outside of the occasional jump scare.

Set in the all-girls boarding school of Fairfield Academy, a group of friends (or more accurately, frenemies) try summoning a ghost who allegedly killed herself years ago at their school. The séance turns out to be just an elaborate hoax, but it was real enough for one of the girls to run back to her room. When the others hear her scream, they think she’s getting back at them for scaring her. But when they go to her room to check on her, they see that the scream was real. She fell out of her window backwards, a pool of dark blood now collecting under her head. Not long after, a new student, Camille (Suki Waterhouse), arrives to take the victim’s place at the academy but the mystery has only just begun.

“Seance” channels the spirits of “Suspiria,” “Mean Girls,” and “You’re Next” but never seems to become a monster with its own identity. Its main characters are underdeveloped, reducing the school girls into mean girl tropes, being mean just for the sake of being mean. The movie relies on referential and in this case self-referential callbacks. Barrett, who broke out writing "The Guest" and incidentally "You're Next," either doesn’t mind or doesn’t think the audience can spot the similarities. During “Seance,” the audience is treated to one class lecture to explain the girls’ fascination with Japanese Noh theater-inspired masks. It later uses the masks in a somewhat similar fashion to the animal masks in “You’re Next.” The mysterious Camille also shares some similarities with Erin (Sharni Vinson), the main character of “You’re Next,” in that she too can fight back against mysterious masked strangers. The academy itself seems like a sketch drawing of the dance academy in “Suspiria,” where young women also have a tendency of disappearing and meeting violent deaths. The movie even spends a few minutes in a haphazard dance class led by a stern teacher who could fit in with the coven of Dario Argento’s film. Even the movie’s title and credit front brings to mind the pink scrolling type used for Sofia Coppola’s “The Beguiled” remake. Inspired by so many suspenseful and original scripts from other directors, it’s strange that Barrett’s feature debut feels so hollow.

The same goes for Waterhouse’s wooden performance, which much of “Seance” centers on. Her emotionless reactions and mumbled lines linger over scenes like a dark cloud, never raining or clearing, just hovering. While others in the group are varying degrees of hostile towards Camille or even switching loyalties, her unfazed stare and cold presence adds nothing to the mix. There’s no stakes in this for her until an impossible and convenient explanation at the end which also deprives the story from a shot of much needed tension.

Unfortunately, Karim Hussain’s dark cinematography offers no bright spots either. The academy is always under-lit and most scenes take place at night. There’s a fuzzy quality to some of the images, and a messy use of a fisheye lens to create some sense of distortion. But what we really lose are the details in the image, like different aspects of the characters, the production design of the academy, and even some of the action sequences. Some shots seem unsteady, some look a touch out-of-focus. The fisheye lens is also not consistently used at certain points or from certain perspectives, like if it were a ghost watching over the scene. It's like an erratic shakeup that distances the viewer from the movie itself.

“Seance” may play easier for audiences unfamiliar with some of the horror movies it’s referencing, or maybe those viewers who don’t mind watching more of the same kind of stories, but the movie lacks a certain sense of personality or signature, be it from the director or the main star. The characters are in search of a spirit from the great beyond; "Seance" is in search of a voice to call its own.

Now playing in theaters, available on demand and on digital platforms. 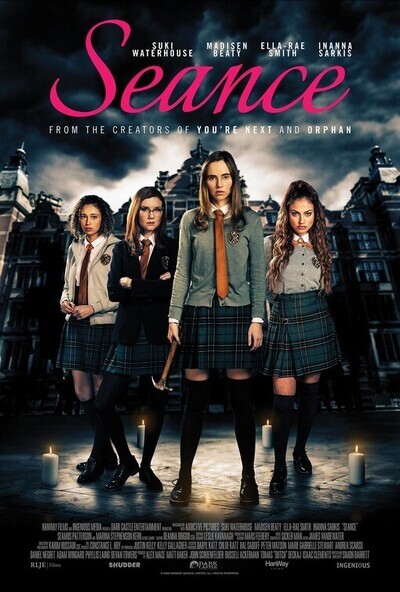 Rated R for bloody horror violence, language and some drug use.