"You're Next" is a simultaneously nihilistic and grossly incompetent horror homage. Imagine "Ten Little Indians" remade by horror buffs who don't have the patience to reproduce what they love most about horror films. Wingard, Barrett and company don't do anything with the slasher conventions they play around with.

Watching "You're Next" is like eating a tin-foil-wrapped tray of leftovers. It's a hamburger, so you shouldn't expect steak. But the contents of your tray are: a half-eaten, microwave-nuked cheeseburger; leaves of wilting, translucent lettuce; slices of yellowing, sickly tomato; and floppy, soggy french fries. Consuming this product is not entirely unpleasant since it's almost impossible to screw up such a short order. But that doesn't change the sad fact that "You're Next" is essentially a flavorless leftover. It looks like what you ordered, but it's only satisfying if you settle for much less.

Because "You're Next" is an assembly-line product made on a small production line, the film has a situation instead of a plot, and types instead of characters. All you need to know is this: A family of estranged siblings re-unite for dinner with their parents. They are subsequently hunted down by masked killers before they can develop personalities, though they all have obvious tics meant to signal personality. For example, Felix (Nicholas Tucci) is shy because he doesn't say anything. His girlfriend Zee (Wendy Glenn) is jaded because she rolls her eyes and smokes. And Drake (Joe Swanberg) is an opinionated asshole because he smirks a lot and is generally loud. So we root for Erin (Sharni Vinson), an Australian college student, because she's the only one who can handle herself in a crisis. Better still, Erin is really good at killing people with improvised weapons. Like, brutally. As in, once she starts putting the hurt on an assailant, she doesn't stop until blood rockets out of freshly created orifices. Look out Sarah Connor, here comes Erin!

Erin's a cold-blooded badass because she grew up around survivalists. This isn't really a spoiler because that information doesn't tell you anything about the character. All it tells you is that Erin can beat people up real good because her family are the most extreme doomsday preppers, the kind who anticipate the end of the world by learning how to survive in any hostile environment.

Knowing that Erin was raised as a survivalist doesn't provide a foundation towards understanding her actions. Instead, it serves as a pretext for her contextless behavior. All we need to know is that Erin's pretty good at being brutal. The scene where Erin tells us about her survivalist past is bereft of any memorable details. This is not an explanation, it's an excuse. It's the filmmakers's way of excusing their love of ghoulishly sadistic violence.

"You're Next" is tonally all over the map. It's as if Wingard and Barrett had a checklist of stuff they wanted to see in their film, and didn't know how to work around that list. Some kill scenes are serious and icky (look before you run!), while some are gross and funny (headshot!). The difference between these two kinds of violence isn't substantial. The film's macabre sense of humor is especially poorly timed. One character pouts "you never want to do anything interesting" when their partner refuses to have sex on top of a corpse. That sequence is sandwiched between scenes where characters maim each other with gusto, especially each other's throats.

The film is also visually confusing. Most of the film's action is covered, and not composed. You can't tell if characters are geographically close to each other until they actually bump into each other, thanks to Wingard's serial abuse of jiggly, close-up-heavy hand-held camerawork. And the film's plotting is equally choppy. It's like you're channel-surfing, and any inter-related scenes are only coincidentally united by a coherent narrative. Characters disappear and re-appear on a whim, and, eventually watching killers pop out of unusual places gets pretty tedious. Even if you're really in the mood for scraps, "You're Next" isn't going to tide you over. 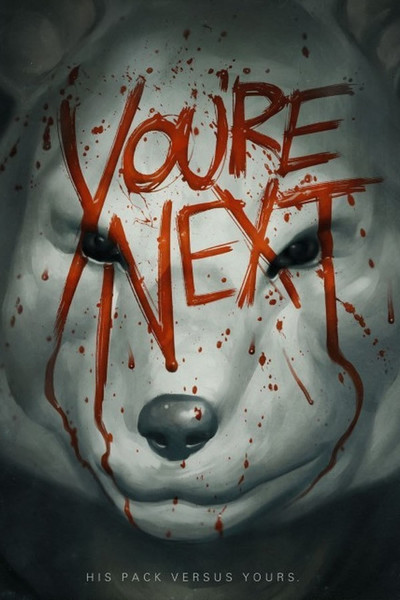