Scouts Guide to the Zombie Apocalypse

For about as long as zombie movies have been a part of the cultural firmament, people have also produced films that have attempted to explore the lighter and funnier side of the deceased returning from the grave, and their single-minded desire to chow down on the brains of the living. In this regard, I think we can all agree on two things. The first is that if we were to compose a list of the best zombie comedies ever made, it would certainly include such titles as George Romero's scathingly satirical "Dawn of the Dead" (1979), the punk rock cult favorite "Return of the Living Dead" (1985), the Grand Guignol classic "Re-Animator" (1985), the much-beloved British entry "Shaun of the Dead" (2004) and "Zombieland" (2009), the cheerfully goofy romp that featured Bill Murray in one of his funniest unexpected cameo appearances that he has delivered over the years. The second is that there is no need to make any room on that list for "Scouts Guide to the Zombie Apocalypse," a deeply irritating horror-comedy that might have worked as a "Funny or Die" short but is pretty much DOA as a feature-length concern.

Ever since they were young, three lifelong friends—nice guy Ben (Tye Sheridan), obnoxious horndog Carter (Logan Miller) and sweet-natured doofus Augie (Joey Morgan) have been Scouts (not Boy Scouts, as I am sure the Boy Scouts would like you to know) under the tutelage of Scout Leader Rogers (David Koechner). However, the three are approaching their junior year of high school and their attitudes towards scouting have shifted a bit—Augie is still a true believer, Carter finds it embarrassing and wants to quit while Ben is torn between his loyalty towards Augie and his desire to impress Carter's hottie sister, Kendall (the wonderfully named Halston Sage). When Ben and Carter are unexpectedly invited to the big secret senior party happening on the same night as an all-important camp-out in the woods, the two plot (reluctantly on Ben's part) to sneak away after Augie and Scout Leader Rogers fall asleep to hit the party and stick with the plan even when the latter never shows. Of course, Augie catches them and runs off crestfallen at the betrayal.

Oh yeah—the zombies. It seems that at a nearby research facility, things have gone bad and a zombie plague has been unleashed with early victims including a deer and Scout Leader Rogers. By the time that Ben and Carter get back to town, most of the populace have been evacuated with only the legions of the walking dead and the partygoers left behind. Eventually, Ben and Carter figure out what is going on and after reuniting with Augie, they realize that it is up to them to utilize their scouting skills to fight off the relentless waves of zombies, find their classmates and lead them to safety before a military airstrike obliterates the town and anything left in it. Helping them in their fight is Denise (Sarah Dumont), a cocktail waitress at the local strip club who not only saves Ben and Carter from an attack by a zombie stripper but who later goes above and beyond the call of duty in trying to help Ben muster the courage to show Kendall how he feels about her.

Like those previous examples of successful zombie-related comedies that I mentioned, "Scouts Guide to the Zombie Apocalypse" is a gory black comedy in which much of the humor is centered around the various disgusting ways in which the zombie hordes are dispatched throughout. The difference is that those films brought other things to the table as well—social satire, knowing spoofs of the history of zombie cinema and (with the possible exception of "Return of the Living Dead") characters who were likable and funny enough to make one hope that they might somehow survive the apocalypse. "Scouts Guide," on the other hand, contains none of those aspects and is all the worse for it. Instead, it merely offers up a series of gross sight gags that don't really have much going for them other than their willingness to nauseate viewers, and to crib at will from its predecessors. (In the most blatant appropriation, the most infamous bit from "Re-Animator" is redone here without a fraction of the wit or audacity of the original.)

For a young actor, a film like this is the kind of thing that one does early in their career as a stepping stone to better things. In the case of Ty Sheridan, it proves to be the opposite—in a still-young career that began with a lovely turn in Terrence Malick's masterpiece "The Tree of Life" (2011) and was immediately followed with strong performances in "Mud" (2012) and "Joe" (2014), this just feels like a waste of his talents. As his pals, Miller and Morgan are largely forgettable while Sarah Dumont makes the only real impression as the surprisingly resilient Denise, the only person on display that anyone would want to spend time with. Those with a particular fetish for watching well-known stars doing weird and off-putting things on the big screen will be thrilled to learn that for the price of a ticket, they can see Cloris Leachman in what is almost certainly the single most embarrassing moment of her entire career and David Koechner in what is probably the third-most-embarrassing moment of his.

Loud, repellent, badly written, indifferently directed and almost completely devoid of any genuine laughs, "Scouts Guide to the Zombie Apocalypse" is essentially a film for 12-year-old boys who can still derive some kind of basic entertainment from the mere sight of spurting blood or a bare breast, all the better if they can appear at the same time. For everyone else, it is little more than disposable junk that will only make you appreciate the achievements of the likes of "Shaun of the Dead" and "Zombieland" even more. By the way, if you have been locked on the notion of zombie strippers since I mentioned it earlier and have wondered why they didn't make a movie about that, you should know that there is indeed a film along those lines by the name of, no surprise, "Zombie Strippers" (2008). Put it this way—it may not be better than "Scouts Guide to the Zombie Apocalypse" but when all is said and done, it is not demonstrably worse either. 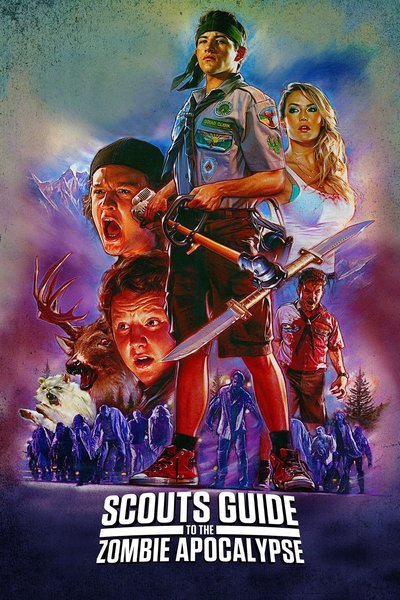 Scouts Guide to the Zombie Apocalypse (2015)

Blake Anderson as Ron the Janitor

Hiram A. Murray as Corporal Reeves