The interesting thing is the way Tony Montana stays in the memory, taking on the dimensions of a real, tortured person. Most thrillers use interchangeable characters, and most gangster movies are more interested in action than personality, but "Scarface" is one of those special movies, like "The Godfather," that is willing to take a flawed, evil man and allow him to be human. Maybe it's no coincidence that Montana is played by Al Pacino, the same actor who played Michael Corleone.

Montana is a punk from Cuba. The opening scene of the movie informs us that when Cuban refugees were allowed to come to America in 1981, Fidel Castro had his own little private revenge -- and cleaned out his prison cells, sending us criminals along with his weary and huddled masses. We see Montana trying to bluff his way through an interrogation by US federal agents, and that's basically what he'll do for the whole movie: bluff. He has no real character and no real courage, although for a short time cocaine gives him the illusion of both.

"Scarface" takes its title from the 1932 Howard Hawks movie, which was inspired by the career of Al Capone. That Hawks film was the most violent gangster film of its time, and this 1983 film by Brian DePalma also has been surrounded by a controversy over its violence, but in both movies the violence grows out of the lives of the characters; it isn't used for thrills but for a sort of harrowing lesson about self-destruction. Both movies are about the rise and fall of a gangster, and they both make much of the hero's neurotic obsession with his sister, but the 1983 "Scarface" isn't a remake, and it owes more to "The Godfather" than to Hawks.

That's because it sees its criminal so clearly as a person with a popular product to sell, working in a society that wants to buy. In the old days it was booze. For the Corleones, it was gambling and prostitution. Now it's cocaine. The message for the dealer remains the same: Only a fool gets hooked on his own goods. For Tony Montana, the choices seem simple at first. He can work hard, be honest and make a humble wage as a dishwasher. Or he can work for organized crime, make himself more vicious than his competitors and get the big cars, the beautiful women and the boot-licking attention from nightclub doormen. He doesn't wash many dishes.

As Montana works his way into the south Florida illegal drug trade, the movie observes him with almost anthropological detachment. This isn't one of those movies where the characters all come with labels attached ("boss," "lieutenant," "hit man") and behave exactly as we expect them to. DePalma and his writer, Oliver Stone, have created a gallery of specific individuals, and one of the fascinations of the movie is that we aren't watching crime-movie clichés, we're watching people who are criminals.

Al Pacino does not make Montana into a sympathetic character, but he does make him into somebody we can identify with, in a horrified way, if only because of his perfectly understandable motivations. Wouldn't we all like to be rich and powerful, have desirable sex partners, live in a mansion, be catered to by faithful servants -- and hardly have to work? Well, yeah, now that you mention it. Dealing drugs offers the possibility of such a lifestyle, but it also involves selling your soul.

Montana gets it all and he loses it all. That's predictable. What is original about this movie is the attention it gives to how little Montana enjoys it while he has it. Two scenes are truly pathetic; in one of them, he sits in a nightclub with his blond mistress and his faithful sidekick, and he's so wiped out on cocaine that the only emotions he can really feel are impatience and boredom. In the other one, trying for a desperate transfusion of energy, he plunges his face into a pile of cocaine and inhales as if he were a drowning man.

"Scarface" understands this criminal personality, with its links between laziness and ruthlessness, grandiosity and low self-esteem, pipe dreams and a chronic inability to be happy. It's also an exciting crime picture, in the tradition of the 1932 movie. And, like the "Godfather" movies, it's a gallery of wonderful supporting performances: Steven Bauer as a sidekick, Michelle Pfeiffer as a woman whose need for drugs leads her from one wrong lover to another, Robert Loggia as a mob boss who isn't quite vicious enough, and Mary Elizabeth Mastrantonio, as Pacino's kid sister who wants the right to self-destruct in the manner of her own choosing.

These are the people Tony Montana deserves in his life, and "Scarface" is a wonderful portrait of a real louse. 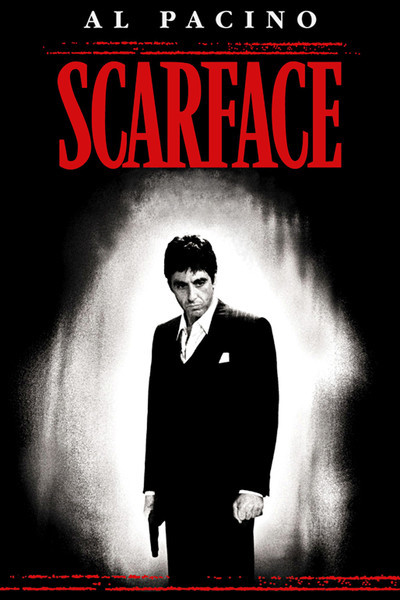