Like a tantalizing mirage, film noir haunts modern filmmakers. Noir is the genre of night, guilt, violence and illicit passion, and no genre is more seductive. But the best noirs were made in the 1940s and 1950s, before directors consciously knew what they were doing (“We called them B movies,” said Robert Mitchum).

Once the French named the genre, once a generation of filmmakers came along who had seen noirs at cinematheques instead of in flea pits, noir could never again be naive. One of the joys of a great noir like “Detour” (1954) is the feeling that it was made by people who took the story perfectly seriously. One of the dangers of modern self-conscious noir, as Pauline Kael wrote in her scathing dismissal of “Body Heat,” is that an actress like Kathleen Turner comes across “as if she were following the marks on the floor made by the actresses who preceded her.”

And yet if bad modern noir can play like a parody, good noir still has the power to seduce. Yes, Lawrence Kasdan's “Body Heat” (1981) is aware of the films that inspired it--especially Billy Wilder's “Double Indemnity” (1944). But it has a power that transcends its sources. It exploits the personal style of its stars to insinuate itself; Kael is unfair to Turner, who in her debut role played a woman so sexually confident that we can believe her lover (William Hurt) could be dazed into doing almost anything for her. The moment we believe that, the movie stops being an exercise and starts working. (I think the moment occurs in the scene where she leads Hurt by her hand in that manner a man is least inclined to argue with.)

Women are rarely allowed to be bold and devious in the movies; most directors are men, and they see women as goals, prizes, enemies, lovers and friends, but rarely as protagonists. Turner's entrance in “Body Heat” announces that she is the film's center of power. It is a hot, humid night in Florida. Hurt, playing a cocky but lazy lawyer named Ned Racine, is strolling on a pier where an exhausted band is listlessly playing. He is behind the seated audience. We can see straight down the center aisle to the bandstand. All is dark and red and orange. Suddenly a woman in white stands up, turns around and walks straight toward him. This is Matty Walker. To see her is to need her.

Turner in her first movie role was an intriguing original. Slender, with hair down to her shoulders, she evoked aspects of Barbara Stanwyck and Lauren Bacall. But the voice, with its elusive hint of a Latin accent, was challenging. She had “angry eyes,” the critic David Thomson observed. And a slight overbite (later corrected, I think) gave a playful edge to her challenging dialogue (“You're not too smart, are you?” she says soon after meeting him. “I like that in a man.”)

Hurt had been in one movie before “Body Heat” (Ken Russell's “Altered States” in 1980). He was still unfamiliar: a tall, already balding, indolently handsome man with a certain lazy arrogance to his speech, as if amused by his own intelligence. “Body Heat” is a movie about a woman who gets a man to commit murder for her. It is important that the man not be a dummy; he needs to be smart enough to think of the plan himself. One of the brilliant touches of Kasdan's screenplay is the way he makes Ned Racine think he is the initiator of Matty Walker's plans.

Few movies have done a better job of evoking the weather. Heat, body heat, is a convention of pornography, where performers routinely complain about how warm they are (as if lovemaking could cool them off, instead of making them hotter). Although air conditioning was not unknown in South Florida in 1981, the characters here are constantly in heat; there is a scene where Ned comes home, takes off his shirt and stands in front of the open refrigerator. The film opens with an inn burning in the distance (“Somebody's torched it to clear the lot,” Ned says. “Probably one of my clients.”) There are other fires. There is the use of the color red. There is the sense that heat inflames passion and encourages madness.

In this heat, Matty seems cool. Early in the film there is a justly famous scene where Matty brings Ned home from a bar, allegedly to listen to her wind chimes, and then asks him to leave. He leaves, then returns, and looks through a window next to her front door. She stands inside, dressed in red, calmly returning his gaze. He picks up a chair and throws it through the window, and in the next shot they are embracing. Knowing what we know about Matty, look once again at her expression as she looks back at him. She looks as confident and absorbed as a child who has pushed a button and is waiting for a video game to respond.

Kasdan, born in 1949, worked in ad agencies before moving to Hollywood to write screenplays. His more personal work languished in desk drawers while his first credits were two of the biggest blockbusters of all time, “The Empire Strikes Back” and “Raiders of the Lost Ark.” George Lucas acted as executive producer on this directorial debut to reassure Warner Bros. that it would come in on time and be releasable. It was; David Chute wrote in Film Comment that it was “perhaps the most stunning debut movie ever” (which raises the question of “Citizen Kane,” but never mind). Kasdan's subsequent career has alternated between action pieces written for others (“Return of the Jedi,” aspects of “The Bodyguard”) and quirky, smart films directed by himself (“The Accidental Tourist,” “I Love You To Death,” and the brilliant, overlooked “Grand Canyon” in 1991).

In “Body Heat,” Kasdan's original screenplay surrounds the characters with good, well-written performances in supporting roles; he creates a real world of police stations, diners, law offices and restaurants, away from which Matty has seduced Ned into her own twisted scenario. The best supporting work in the movie is by Mickey Rourke, in his breakthrough role, as Ned's friend, a professional arsonist. Richard Crenna is Matty's husband. “He's small, and mean, and weak,” she tells Ned, but when we see him he is not small or weak. Ted Danson and J.A. Preston are a D.A. and a cop, Ned's friends, who are drawn reluctantly into suspecting him of murder (Danson's sense of timing and nuance are perfect in a night scene where he essentially briefs his friend Ned on the case against him).

“Kasdan has modern characters talking jive talk as if they'd been boning up on Chandler novels,” Kael wrote, “and he doesn't seem to know if he wants laughs or not.” But isn't it almost essential for noir characters to talk in a certain heightened style, and isn't it possible for us to smile in recognition? On the night they first make love, Ned tells Matty, “Maybe you shouldn't dress like that.” She says, “This is a blouse and skirt. I don't know what you're talking about.” And he says, “You shouldn't wear that body.” Chandleresque? Yes. Works in this movie? Yes.

And there is some dialogue that unblinkingly confronts the enormity of the crime that Ned and Matty are contemplating. In many movies, the killers use self-justification and rationalization to talk themselves into murder. There is a chilling scene in “Body Heat” where Ned flatly tells Matty: “That man is gonna die for no reason but . . . we want him to.”

The plot and its double-crosses are of course part of the pleasure, although watching the film again last night, aware of its secrets, I found the final payoff less rewarding than the diabolical setup. The closing scenes are obligatory (and the final beach scene is perfunctory and unconvincing). The last scene that works as drama is the one where Ned suggests to Matty that she go get the glasses in the boathouse, and then she pauses on the lawn to tell him, “Ned, whatever you think--I really do love you.”

Does she? That's what makes the movie so intriguing. Does he love her, for that matter? Or is he swept away by sexual intoxication--body heat? You watch the movie the first time from his point of view, and the second time from hers. Every scene plays two ways. “Body Heat” is good enough to make film noir play like we hadn't seen it before. 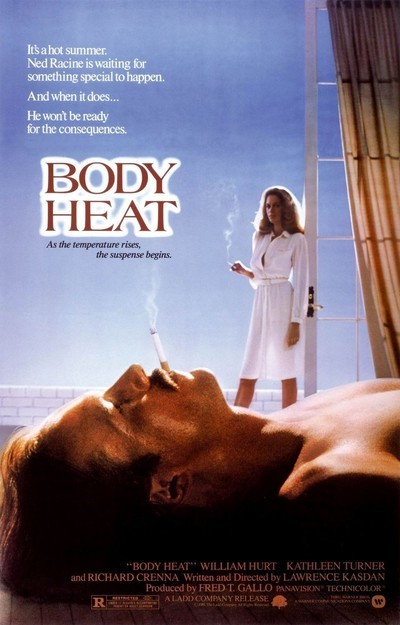