I don't think Kimberly Levin's debut feature "Runoff" entirely works as a story or a statement. But as an experience, it's amazing—so unlike most other recent American independent films in its style and mood that if it weren't for the present-day signifiers (cars, haircuts, clothes), you'd think it had been time-warped in from the American New Wave era of the 1970s, when directors prized characterization, cultural details and a powerful sense of place, and enclosed all it within carefully composed frames that allowed people to just be, and the audience to just look and listen. Watching it gave me flashbacks to the first time I saw "Stormy Monday," "Blood Simple," "sex, lies and videotape" and "She's Gotta Have It"—films whose many instances of miscalculation, overreaching, overconfidence or incoherence were balanced by an almost eerie assurance.

"Runoff" is, on first glance, a "Save the Farm" polemic, along the lines of that 1980s bumper crop that included "The River" and "Country." But appearances deceive: Levin is aiming for something a little bit closer to a Don DeLillo novel, Atom Egoyan's ominous and powerful but sadly forgotten "The Adjuster, and Todd Haynes' "Safe." This is a film about the interconnectedness of all things—nature, civilization, individuals, families, cities—and how this web can be contaminated by toxins, not just chemical but ideological and emotional. Levin is working at a very high conceptual level here, nearly walking a tightrope sometimes, but she has a light and sure step. The movie doesn't do everything it seemingly wishes to do, and there are moments when you might wonder if there aren't actually three or four movies in this movie when just one might've resulted in a leaner and more altogether successful film. But such ambition is not to be discouraged. It should be celebrated, especially when it's accompanied by the "film sense"—to use Pauline Kael's great description of Spike Lee—displayed by cinematographer Hermes Marco, and Francesc Sitges-Sarda, the superb cast, and Levin, who pulled a Mike Figgis and composed the movie's score as well.

Betty Freeman (Kelly) and her husband Frank (Neal Huff) are the owners of a small house and a small piece of land and a small business, Freeman's Farm Supply. She's a beekeeper. He administers pharmaceutical to pigs at nearby farms and keeps the supply company's books. The Freeman farm is on the brink of insolvency, a fact established mostly through subtle, non-expository dialogue, uncomfortable silences and plain-spoken situations, such as the moments where strangers approach the Freemans asking to buy the farm or collect a late payment.

They have a couple of kids who are rebelling in rather mild, understandable ways, less because they don't like their parents (they get along with them quite well) than because rural life can be less than exciting for a teenager. The Freemans' eldest son Finley (Alex Shaffer) draws obsessively, resists his dad's pressure to go to college to get an agricultural science degree as Something to Fall Back On, and fantasizes about running off to the city. The younger brother Sam (Kivlighan de Montebello) is bored and restless and spends a lot of time down at the nearby creek with his charming friend Elena (Rashel Bestard).

The film edges toward three-hanky melodrama (when Frank starts visiting a doctor and not telling his wife), borderline-noir (when Frank has to turn to shady activities to make money, and turns to a craggy local character played by the great character actor Tom Bower) and a rural version of a comedy-drama about middle-class values and parenting. There's a wonderfully awkward, real-seeming scene where Betty smokes pot on a roof with one of her sons—a parenting failure, I guess you'd have to say; but also an admission that inside she's still a teenager, too; also an excuse for them, and us, to take a good, long look at the clear country skies at night. Levin and her collaborators have made the farm's interior and exteriors and the surrounding terrain come so alive that certain aspects of the production sink into the mind and will reappear a day or two later like recollected images from dreams. I'm thinking of the opening montage of closeups of dewy crops about to be sprayed with pesticide, and the almost abstracted images of beekeeping equipment, and the jump-cuts that show Frank washing chemicals off his torso in the shower and the view through the driver's side window of Alex's pickup truck as he secretly drives from the country into the nearest thing to a city, and watches the landscape change just beyond his outstretched left hand. But there are so many, really, that I couldn't begin to list them all.

Also notable, though perhaps only to formalist-minded viewers, is the way Levin frames the actors and moves the camera. This is not a cut-cut-cut film that's so terrified of losing people's attention that it jumps all over the place, never letting a character finish a sentence without showing us everyone's reaction to every other phrase they speak. Much more often, Levin will put the camera in a particular spot and let the actors move through the foreground and background in such a way that their position relative to us tells us about what they're thinking and feeling, and what that particular scene might mean in context of the story.

Some of the interior scenes in the Freeman's living room rank with cinema's loveliest images of family intimacy. Parents and children have their differences—they misunderstand and stereotype each other, they snipe and complain—but you always feel the love flowing between then because of the way they're lit and shot. Some of the compositions are reminiscent of the quiet domestic scenes in early Steven Spielberg films like "Jaws" and "Close Encounters." A shot of breakfast cooking on a stove in the extreme foreground and a young boy in a doorway the background is about as simple and lovely an image of domestic paradise as I've seen in a movie. Even better is a shot of the sons seated inside a pickup truck's cab in the foreground of a shot, watching a disquieting figure talking to their parents in the background, inside the house, seen through open windows and doors. There is so much happening in this shot—so many planes and panels of action, so much meaningful body language—that when the man leaves the house, and we follow his exit via the reflection in the driver's side mirror, it feels like an extraordinary and unexpected present on top of all the riches the moment has already bestowed.

Again, I can't stress enough that this isn't a perfect movie; I don't want my specific enthusiasms to be construed as a blanket endorsement. But I can say without hesitation that if you want to be able to say you were there when a great American filmmaker's career kicked off, you need to see "Runoff." 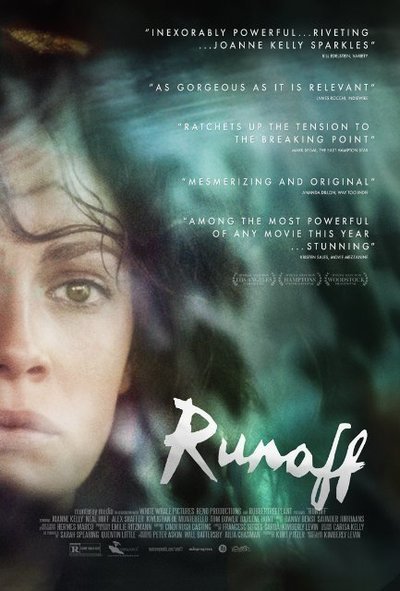 Rated R some drug use