Rio, I Love You

“How do I look?” Vanessa Paradis asks John Turturro in one of the many interlocking shorts that make up “Rio, I Love You.”

“Wispy,” he answers. And that’s the perfect word to describe the film itself.

Despite the presence of some serious directors (Fernando Meirelles, Paolo Sorrentino, Sang-soo Im, Turturro himself) and some heavy-hitting actors (Harvey Keitel, Emily Mortimer, Fernanda Montenegro, Vincent Cassel), “Rio, I Love You” feels like little more than an extended tourism promotion video. Everywhere you look, it’s sun-kissed and shimmering. Aerial shots dazzle of lush, verdant hills with the Christ the Redeemer statue overlooking them majestically. Down below, the city of Rio de Janeiro itself is filled with beautiful, tragic and elusive women and the men who are doomed to love them.

It’s all extremely romantic...and shallow, and actually a little dull.

“Rio, I Love You” is the third installment in the Cities of Love series—films composed of several shorts by different directors, intended as an homage to a particular place—and it’s by far the weakest. “Paris, Je T’aime” (2007) was hit-and-miss, as such anthologies tend to be, but it worked more often than not and it achieved its goal of affectionately and vibrantly bringing a city to life. “New York, I Love You” (2009) wasn’t nearly as effective in evoking a city that’s been depicted countless times on film. But whereas those first two movies contained consecutive shorts that could stand alone with a clear beginning, middle and end, the “Rio” storylines overlap erratically. We get chunks of some and blips of others, which makes the overall pacing feel jarring and weakens the potential for emotional connection.

We begin with the segment from Sorrentino, whose lush work includes last year’s “Youth.” Mortimer is miscast as a crass American named Dorothy who’s on vacation in Rio with her elderly, infirm husband, James (Basil Hoffman). While he sits in a wheelchair by the pool or at the beach, she chain-smokes and complains. The two exchange stilted banter. What’s meant to be amusing instead is annoying.

One entire piece (from Jose Padilha) is about a guy hang-gliding around the scenic hills, pining for his lost love. Another (from Stephan Elliott) is about an Australian actor (Ryan Kwanten), in town to promote a film, who sees the imposing Sugar Loaf Mountain and insists on climbing it with his driver (Marcelo Serrado). These types of shorts feel wacky and vapid.

On the other end of the spectrum are morose, self-serious shorts like the one Turturro directed himself in with Paradis; they co-star as lovers quarreling at the end of a relationship. But there’s no context for their romance or their loss of it, so the whole exercise feels dramatically empty long before it turns into a music video, with Paradis singing wistfully in French as she strolls along the coastline.

Meirelles uses music far more effectively and cleverly in his wordless short, which finds Cassel playing a Copacabana sand sculptor who seeks inspiration from the eclectic mix of people parading past him. Each gets his or her own rhythm, depending on who they are and how they’re walking. Alternating between ground-level and overhead shots, Meirelles makes some inspired choices with shadows and beats.

But that’s a rare example of a segment that actually works. The other—and the only one that you’d like to see extended to a feature film—comes from Guillermo Arriaga, best known for his screenplay work on the Alejandro Gonzalez Inarritu films “Amores Perros,” “21 Grams” and “Babel.” Arriaga has crafted an intriguing story about a once-promising boxer (Land Vieira) and his wife (Laura Neiva), a former model, who have suffered life-altering injuries in a car accident. Out of nowhere, a foreigner (Jason Isaacs) makes them an offer that could change all three of their fates for the better. The performances are subtle and the suspense is palpable.

This also happens to be the rare short that depicts Rio as anything but sunny and sanitized. There’s a grittiness and a danger here that aren’t just welcome, they’re factually necessary. (I’ve never been to Rio, but I have to assume there’s more to it than hang-gliding and impromptu dance parties in the street.)

Other shorts that show glimmers of poverty—or even a diversity of existence—do so in a feel-good, jokey way. One (from Andrucha Waddington) features the great Montenegro as a saucy homeless woman who’s philosophical about her choice to live on the streets. Another (from Korean director Im) depicts prostitutes as sexy, voluptuous vampires. Yet another (from director and co-star Nadine Labaki) is about a precocious, scruffy orphan boy (Caua Salles) who thinks Jesus is going to call him on a pay phone at the Rio train station. Keitel, playing a version of himself as an actor in town for a shoot, comes to the rescue.

Too bad he couldn’t have rescued the entire movie. 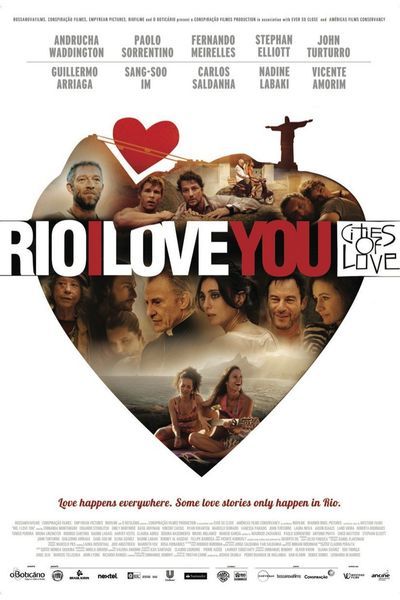