When a tiny lovelorn frog bellowing a Broadway-style torch song hits one of the few high notes of "Rio 2"—an unnecessary animated sequel that presumably exists because the first "Rio" grossed a robust $485 million worldwide—you know something is off-key.

Not that the number doesn’t deserve to stand out considering the singer behind the amorous amphibian is Kristin Chenoweth, an Ethel Merman-class belter who is both riveting and ribbit-ing as a purple-and-pink croaker named Gabi. But her performance, inspired by an unrequited crush on vengeful cockatoo Nigel (once again voiced with pungent derision by Jemaine Clement, who gets his own showstopper with a rap-infused version of "I Will Survive") should not be the main takeaway in a story that is primarily about a family reunion of tropical parrots.

It’s a sign of creative desperation of sorts that this return trip to South America is so over-stuffed with subplots and extraneous new characters that it barely stops flapping its plot-propelling wings for a second. As a result, "Rio 2" ends up being not so much about the birds as mostly for the birds.

The 2011 original dared to touch upon the issue of rampant poverty in the frenzied Brazilian party city of Rio de Janeiro while following a pair of rare blue macaws who fall in love despite their differences. What distinguished that outing from other recent cartoon flights of fancy was the way the furry-and-feathered wisecrackers were grounded by intoxicating cultural flourishes, rump-shaking rhythms and real-world urban surroundings.

Instead, this time around, we are forced to deal with the avian version of "Meet the Parents," a less-than-compelling eco-message about chopping down habitats, a soccer match that takes place in the sky and a jungle version of Amazon’s Got Talent as a string of exotic creatures audition as Carnaval entertainers.

Timid Blu (whose nebbishy vocal quirks are once again provided by Jesse Eisenberg) and untamed Jewel (Anne Hathaway, at her best when carrying a tune) are happily nesting together with their three kids—save for the fact that Mama Bird yearns for a life that is more back to nature and less reliant on human-provided comforts. But when another blue macaw is reported to have been spotted in the rainforest, Jewel convinces her clan to take the 2,000-mile trek to mingle with others of their kind. Once again along for the ride as presumed comic relief are lively toucan Rafael (George Lopez), cardinal Pedro (will.i.am) and canary Nico (Jamie Foxx).

Much humor comes at the expense of Blu’s nerdy attachment to his fanny pack, stuffed with such travel necessities as an electric toothbrush, breath mints and a portable GPS (note to filmmakers: “recalculating” jokes have long passed their expiration date). But he feels Ben Stiller as Gaylord Focker’s pain when Jewel reunites with her father, the brusquely judgmental and brushcut-sporting Eduardo (Andy Garcia, doing a Latin-flavored De Niro impression). Adding a dash of jealousy to Blu’s humiliation is the presence of Jewel’s childhood pal, the bedroom-eyed preening crooner Roberto (Bruno Mars).

For every visually dazzling 3-D musical moment—such as when the brilliantly hued macaws swirl about in formation as if choreographed by Busby Berkeley (or should that be Beak-eley?)—there is some dull business involving Blu’s former owner Linda (Leslie Mann) and ornithologist hubby Tulio (Rodrigo Santoro), who also journey to check out the newly discovered macaws.

At the point where one and all engage in a showdown with a gang of generically villainous lumber snatchers, "Rio 2" has exhausted its limited amount of charm. Most regrettably, Rita Moreno appears in her first movie in eight years as Jewel’s overbearing Aunt Mimi but is barely allowed to make an impression. Don’t illegally destroy trees—but don’t waste the talents of a true legend, either. 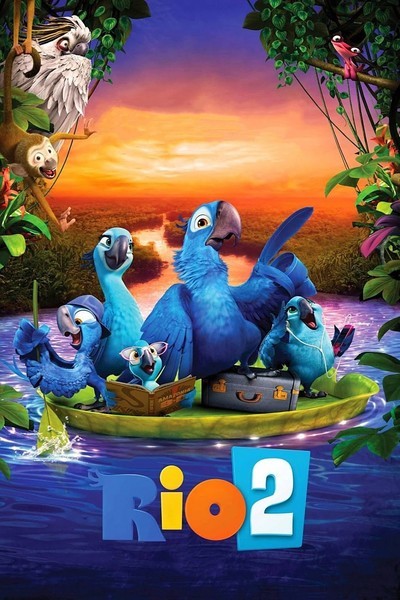