The Aretha Franklin biopic, “Respect” ends with footage of the real Queen of Soul bringing down the house at the Kennedy Center Honors tribute to Carole King. Re plays the piano and sings “(You Make Me Feel Like) A Natural Woman,” the composition King co-wrote. At the climax of this performance, Re tosses her fur coat to the stage floor with a true diva’s reckless abandon. Having a biopic close with its actual subject is an expected trope, perhaps the only one not viciously mocked by the superb parody “Walk Hard: The Dewey Cox Story,” and I usually find it to be an unnecessary swipe at the actor who’s spent the last two-plus hours trying to convince you they were that person. Any spell cast by the performance is suddenly broken by the arrival of the genuine article.

Here, the real Re shows up just after her portrayer, Jennifer Hudson, swaggers into that Los Angeles church to record Franklin’s biggest album, Amazing Grace. I remembered that moment from the 1972 documentary film of the concert, which sat unfinished for almost 50 years before its world premiere in 2018. In my review, I said that movie took me back to church. Watching Hudson sing the title song, decked in the same outfit and hairstyle, I felt similarly transcended. Casting a fellow belter from the church as one of the great products of a gospel upbringing is an incontrovertible requirement, especially if the actor is going to be singing her own songs. And Hudson doesn’t just sing; if I may use the vernacular, Jennifer Hudson sangs. But it’s in her recreation of that church entrance that she finally goes “full Aretha,” that is, we see everything we know and love about this icon. So when director Liesl Tommy switches to that Kennedy Center footage, it feels less like a usurping and more like the final scene in an origin story.

“Respect” reminded me of “Lady Sings the Blues,” the 1972 vehicle where Diana Ross portrayed Billie Holiday. As an analogy, this is to that film what Cynthia Erivo’s Franklin miniseries "Genius: Aretha" is to last year’s “The United States vs. Billie Holiday.” (Full disclosure: I disliked Erivo’s show intensely despite her being an incredible singer.) Like Ross’ film, this is a pure Hollywood treatment of its material that benefits from its shiny presentation as much as it benefits from a spectacular lead performance. I don’t think there’s a scene in Sidney J. Furie’s movie where I didn’t know I was watching Diana Ross as Billie Holiday—and Hudson wisely follows Ross’ lead in not attempting an imitation of her character’s unmistakable voice. But, I felt the essence of Holiday being channeled onscreen.

Hudson does something similar here, and admittedly that may not be enough for some to save “Respect” from the genre trappings it adheres to. I tend to prefer interpretations like Anthony Hopkins in “Nixon” to the slavish imitation of something like Rami Malek in “Bohemian Rhapsody.” But there is only one Aretha Franklin, and as a lifelong fan, I wasn’t sure I would be able to surrender here. Plus, the screenplay by Tracey Scott Wilson has some clunky and overfamiliar dramatic moments, and occasionally keeps her lead character’s pain at an arms’ length that weakens just how triumphant the real story is. Yet, Hudson is this film’s savior. She puts it on her shoulders like a wounded comrade, carries it off the battlefield to safety, and nurses it back to health. The tagline says “Jennifer Hudson is Aretha Franklin,” but in truth, it should say “Jennifer Hudson is this movie.”

Laying the groundwork for Hudson is Skye Dakota Turner, who plays the young Aretha in the early scenes of “Respect.” In her short screen time, she skillfully telegraphs both the joys and the trauma that will influence the adult version of her character. A born performer, she holds the audience in the palm of her hand when Re’s father, Rev. C.L. Franklin (Forest Whitaker) drags her out of bed to perform at a party filled with Black performer royalty like Dinah Washington (Mary J. Blige in a short, effective cameo). “She’s only 10, but her voice is going on 30,” we’re told. Turner’s reactions to Audra McDonald (in an underwritten part as Franklin’s mother) make a later scene between Hudson and McDonald more powerful than anything in the script. Her performance appropriately haunts the film.

There’s a fair amount of ugliness in Franklin’s story—sexual assault, domestic abuse, alcoholism—and it’s to the film’s credit that it resists the temptation to treat these issues salaciously. But “Respect” never goes deeper than a surface-level exploration of how these traumas affected Franklin. They’re referred to as “the demons,” and kind of left at that. This makes it harder to understand something like her relationship with the abusive Ted White (Marlon Wayans), a man her father immediately tags as bad news because he correctly sees a reflection of his own egregious sins. Wayans is a better actor than films like “A Haunted House” indicate, but he’s not adept at balancing a charming exterior with a rotten core; someone like Larenz Tate would have brought that more effectively to this role. Like so many things, White is best summed up by an Aretha Franklin song lyric. In this case, it’s the succinctly brilliant opening lines of “I Never Loved A Man”: “You’re a no good heartbreaker, you’re a liar and you’re a cheat. And I don’t know why I let you do these things to me.”

That song features in one of those biopic tropes where the singer seems to pull a song out of thin air. Except here, it works because “Respect” uses it to frame Franklin’s improvisational and arrangement skills. The one moment we see her writing a song, it’s only the skeleton of her bluesy masterpiece “Dr. Feelgood.” Hudson captures the humble side of Franklin in the scene where she sings “Ain’t No Way,” a composition by her sister, Carolyn (Hailey Kilgore). “Show me how to sing your song,” she says, fully immersed in the collaboration. (This performance is also the closest Hudson comes to an approximation of the real thing.) There’s so much music here, being written, arranged, and performed onscreen, that “Respect” almost plays like a musical.

Though this is the lead actor’s show all the way, a few supporting performance stand out. Tituss Burgess seems like an odd choice for Rev. James Cleveland until you remember the mischievous twinkle in the late legend’s eye. And Marc Maron makes for a very good Jerry Wexler, but he didn’t endear himself to me as much as Curtis Armstrong’s portrayal of fellow Atlantic Records alum Ahmet Ertegun in “Ray.” Whitaker is pretty much a caricature, but he masterfully captures the pious, bougie hypocrisy that emanated from every preacher I’ve ever met in my life.

These actors keep things moving while you’re marking off your “Walk Hard” trope bingo cards. You won’t have enough spaces to yell “BINGO!” but no matter. Jennifer Hudson can sing and “Respect” is at its best when it lets her do just that. Whether it’s in a nightgown or in the full, glorious regalia Aretha Franklin adorned in her concert appearances, Hudson performs with the same tireless intensity Re was known for throughout her career. It’s a damn good performance and this is a damn entertaining movie. It’s going to be a hit, and like many a flawed but beloved classic, it’s gonna play on cable for decades. 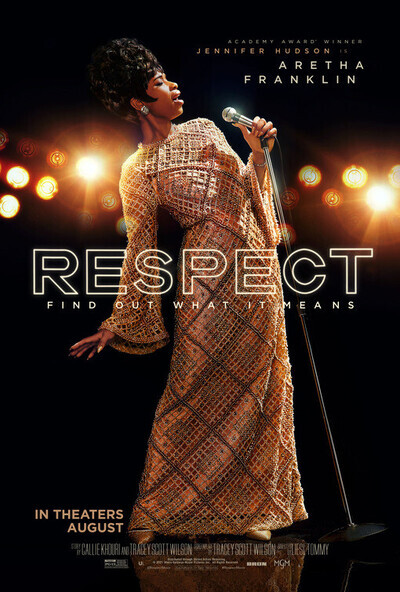