There's a scene in "Bohemian Rhapsody" I keep coming back to, because it's symbolic of the film's problems, not just with its presentation of Queen, but of Freddie Mercury, the legendary lead singer and the greatest frontman of all time. (I'd say "arguably" but for me there's no argument.) One night, Freddie Mercury (an extraordinary Rami Malek), missing the excitement of touring, throws a costume ball in his mansion. Dressed in an ermine cloak and a crown, he swings through the crowd, made up of men in various degrees of fabulous drag. The other members of Queen—lead guitarist Brian May (Gwilym Lee), drummer Roger Taylor (Ben Hardy), and bassist John Deacon (Joseph Mazzello)—sit together, visibly uncomfortable. Freddie greets them rapturously, and one of them says stiffly, "This isn't really our scene, Freddie." Later that night, Freddie hits on a waiter named Jim (Aaron McCusker), who rebuffs him, saying, "Call me when you like yourself."

The more I think about this scene—the problems of which could fill an entire dissertation—the angrier I get. "Bohemian Rhapsody"—written by Anthony McCarten ("The Theory of Everything", "Darkest Hour") and directed by Bryan Singer (with uncredited director Dexter Fletcher, who took over after Singer was fired)—wants me to watch the costume ball scene and think, "Wow, I'm scared for Freddie. Freddie needs the stability of his (married, straight) band members to counteract the SUPER gay world he's living in." I struggled with this scene, I tried to give the filmmakers the benefit of the doubt. But what's onscreen is what is intended. We are meant to side with the band members, we are meant to look at Freddie with the same discomfort about him acting so, well, gay. It's unforgivable.

Opening and closing with Queen's triumphant performance at Live Aid in 1985, the film shows (sort of) the transformation of shy buck-toothed Farrokh Bulsara, the closeted son of Parsis parents, into the strutting swaggering Freddie Mercury. Freddie is shown approaching a band he likes backstage at a club in London. They just lost their lead singer, and Mercury has written a song he wants to show them. Next thing you know, he makes his debut with them, and, except for one catcall of "Paki," Freddie and his flamboyant movements goes over really well. Next thing you know, they're Queen, and they're touring the world. In the film, their artistic journey is boiled down into on-the-nose statements like, "We'll mix genres and cross boundaries!" Do rock stars speak like this? The genesis of some of their biggest hits—"Bohemian Rhapsody," "Another One Bites the Dust," "We Will Rock You"—are treated in a cursory manner, with very little insight provided into an actual creative process.

Biopics tend towards the "sensational," making the mistake of thinking that the most interesting thing about James Brown, for example, is his personal life, when why we care about James Brown is his music. "I Saw the Light" was far more interested in Hank Williams' drug addiction than in what he actually did in country music that was so groundbreaking. Some films—like "Love & Mercy" and "I'm Not There"—move away from the biopic approach altogether, and attempt to grapple with the subject matter as artists. The artistic commentary in "Bohemian Rhapsody" tends towards a knowing wink-wink at the audience. "Nobody wants to listen to a six-minute opera song with words like 'Galileo' in it!," cries one record label executive (played by Mike Myers in a bit of meta-casting, calling up the "Bohemian Rhapsody" scene in "Wayne's World.")

"Bohemian Rhapsody" is bad in the way a lot of biopics are bad: it's superficial, it avoids complexity, and the narrative has a connect-the-dots quality. This kind of badness, while annoying, is relatively benign. However, the attitude towards Mercury's sexual expression is the opposite of benign. The tensions of being a gay man in the 1970s are not handled, or even addressed. He himself seems unaware of his own sexual desires. He falls in love with Mary Austin (Lucy Boynton), and looks shocked and disturbed when a trucker gives him a seductive side-eye at a restroom in middle America. (Fade to black. We never see what happened next.) Later, Mary says to him, "You're gay, Freddie," and he responds, "I think I'm bisexual." That's as far as the conversation goes. The film is rated PG-13, so there's not much sex in it anyway, but he's shown in a romantic context only with Mary.

There's no other word for this approach than phobic. The relationship with Mary was hugely important to Mercury (he left his estate to her in his will), but the subtleties of the situation and the context of what it would mean to "come out" in the 1970s are not explored at all. The script makes it seem like Mercury had no desires for homosexual sex until Paul Prenter (Allen Leech) came along and showed him the way.

None of this is the fault of Rami Malek, whose imitation of Mercury goes beyond the famously prominent teeth. He taps into Mercury's ferocious energy, particularly in the concert sequences, all of which give you the electric sense of what it might have been like to be there in person. The single star of this review is for Malek's performance.

The film's reluctance to deal with Mercury's sexuality is catastrophic because his sexuality is so connected to the art of Queen that the two cannot be separated out. Refusing to acknowledge queerness as an artistic force—indeed, to point at it and suggest that this is where Mercury went astray—is a deep disservice to Mercury, to Queen, to Queen fans, and to potential Queen fans. Genius doesn't emerge from a vacuum. Mercury was made up of all of the tensions and passions in his life: he loved Elvis, opera, music hall, costumes, Victorian England ... and, yes, sex. Lots of it. Sexual expression equals liberation, and you can feel the exhilaration of that in Mercury's once-in-a-generation voice. You cannot discuss Freddie Mercury without discussing the queer sensibility driving him, the queer context in which he operated. Or, you can try, as this film does, but you will fail. 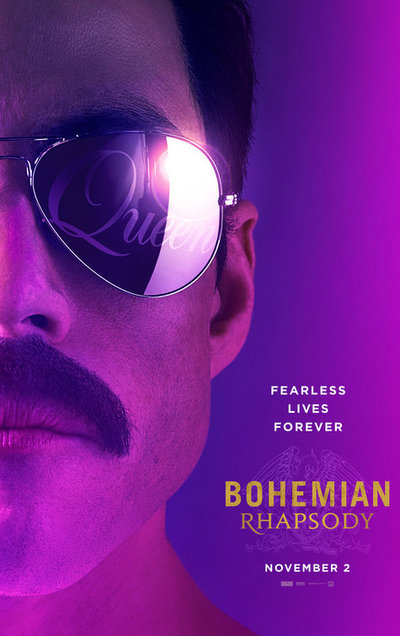 Gwilym Lee as Brian May