Requiem for the American Dream

“Requiem for the American Dream,” a film by Peter Hutchison, Kelly Nyks and Jared P. Scott, might be subtitled “Professor Chomsky Explains It All for you.” As Errol Morris did with Robert McNamara in “The Fog of War,” the directors here point their cameras in close-up at Noam Chomsky for a feature-length disquisition that’s interspersed with snazzy graphics and illustrative archival footage. In large part because Chomsky is a very good speaker with a wealth of incisive ideas to share, the result is a film that feels less like a lecture than a provocative X-ray of current American political realities.

It couldn’t be more timely, not only because the idea that it is its heart—the impact of the concentration of wealth and power on our politics—has received so much attention of late, but more specifically because its animating concerns are central to the current year’s presidential election. For that reason, its appeal could be more ecumenical than might be assumed. How many Americans currently would agree that the American dream is in big trouble? A good percentage, recent polls suggest. That’s why Chomsky’s leftist analysis, as a starting point for discussion at the very least, could offer as much food for thought for the supporters of Donald J. Trump as it will sustenance for Bernie Sanders’ legions.

The film’s title aptly pinpoints its area of interest. Though Chomsky, a veteran MIT professor who first gained renown for his groundbreaking work in linguistics, comments frequently on global conflicts and America’s involvement therein, we hear almost nothing on those subjects here (which even the film’s admirers might consider a weakness). The upside to this decision, though, is that the discussion has a tight, logical focus that aids its clarity and organization.

In essense, Chomsky asks why America seemed to reach the zenith of its economic and civic vibrancy in the 1950s and ‘60s and then go into a decline that has left few except the top tenth of a percent of Americans truly fulfilled or satisfied. To answer the question, he constructs a narrative that entwines ideas and events, both harkening back to 1776. In that year, British moral philosopher Adam Smith published “The Wealth of Nations,” in which he argued that merchants and manufacturers dominate government in defense of their own interests regardless of how it affects the rest of society. In examining the government that resulted from the American Revolution, begun in the same year, Chomsky finds that even James Madison, whom he calls as a great a believer in democracy as anyone then, wanted U.S. society controlled by “the wealthy”—property owners might be a better term—which he thought was the most “responsible” element of the citizenry. Thus was launched a never-ending battle between those desiring more democracy from below against those seeking more elite control from above.

The ideas Chomsky presents are necessarily simplified for the sake of compression, and trying to summarize them briefly simplifies them even more. But their gist is clear and worth pondering. In post-World War II America, he suggests, there was a direct correlation between the average worker having a job that allowed him to own a home, support a family and educate his kids, on the one hand, and, on the other, the facts that the wealthy were taxed at a high rate, businesses were engaged mainly in making products designed to sell (which their workers could afford to buy), and the power of lobbyists and corporations in Washington was relatively limited.

The 1960s changed much of that. While the civil rights, antiwar and feminist movements transformed society with an upsurge of democratic activism from ordinary citizens, the powerful, alarmed at their loss of control, reacted with fierce efforts to consolidate and extend it. (Chomsky doesn’t note how many non-elite Americans were also alarmed by the turmoil in the streets, though he does ponder the irony that Richard Nixon, who benefited from their reaction, was a raving progressive compared to those who came later.) The eventual consequence was a country that was like the ‘50s turned upside down: through deliberate efforts to undermine job security, the middle class was hollowed out both economically and psychologically; while less wealthy, post-WWII America was able to give free or low-cost college educations to most students, today’s graduates are shackled with huge debts that help make them passive workers; corporations now devote far less energy to making products than to making money through moving it around, and protect their powers by, in effect, buying the kind of government that helps them maintain and increase that power.

Chomsky aptly calls the process he describes a “vicious cycle”—the more money that goes into politics with the intent of influencing it, the more our politics is ruled by money rather than any other definition of national welfare. The baneful effects of the Citizens United decision, which effectively removed all limits on how much money corporations can pour into elections, are noted, but Chomsky also blasts the influence of advertising culture as well as the modern media, which have helped turn citizens seeking useful information to make rational decisions into passive consumers, addicted to shopping, hypnotized by their devices and increasingly prone to making irrational, emotional decisions that are actually contrary to their own interests.

The politics of image may be ubiquitous and inescapable now, but they are not for Chomsky. “I don’t agree with Sarah Palin about much,” he says, before he shares her scorn for the “hopey, changey thing” that many swayed voters two presidential elections back. It’s a caveat that both sides might consider in 2016, even if the direness of Chomsky’s analysis suggests that the real requiem he’s offering is not for the American dream but for American self-government, a good idea while it lasted. 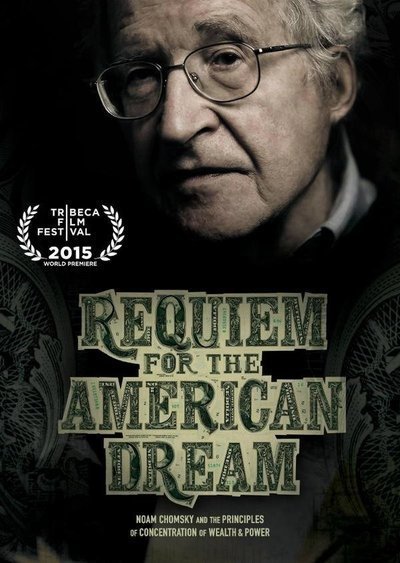 Requiem for the American Dream (2016)

Noam Chomsky as Himself