Rawson Marshall Thurber’s “Red Notice” should work on paper. It’s got a charismatic cast sent globe-hopping to beautiful places on a treasure hunt straight out of an “Indiana Jones” movie. How could it go wrong? Well, for starters, Thurber and everyone involved forgot a little thing called personality. Rarely have I seen a movie that feels more processed by a machine, a product for a content algorithm instead of anything approaching artistic intent or even an honest desire to entertain. And while there have been quality blockbusters produced by the Hollywood machine for generations (I miss those days), it feels like we’re increasingly reaching the point where they are so calculated and programmed that the human element is completely drained from them, making them as disposable as a fast food cheeseburger. Worst of all, that “content” approach is pulling the life from stars who have shown so much of it in the past. When the poster for “Red Notice” was released, most people lamented its Photoshopped, bland nature. They didn’t realize how honestly it captured the movie.

Thurber, the director of “Central Intelligence” and “Skyscraper” (two movies I enjoyed enough on their own terms, for the record), reunites with his muse, Dwayne Johnson, who plays the FBI’s top profiler John Hartley. The film opens with an awkwardly inserted info dump about three coveted eggs that were once the property of Cleopatra. Only two have been discovered, making the missing golden egg into a Holy Grail for treasure hunters, including one of the world’s most notorious criminals Nolan Booth (Ryan Reynolds). In the film’s relatively effective opening sequence, Hartley catches Booth trying to steal one of the eggs, inadvertently tying the two for the rest of the film into a classic buddy comedy dynamic—the muscle guy and the fast talker. They battle the authorities, a few bad guys, and another criminal mastermind nicknamed The Bishop (Gal Gadot) as they bounce around the world, trying to obtain all three eggs and sell them to the highest bidder.

Films like “Raiders of the Lost Ark” and “National Treasure” were clear inspirations on “Red Notice” but to say this movies lacks the identity of great action/adventure movies would be an understatement. Thurber’s direction seems to have been simply to put Reynolds, Johnson, and Gadot on camera and allow their screen presence and familiar techniques to carry the story, and one can literally see the weight of that on their shoulders. Johnson has never been this wooden, unable to find the hero or everyman in a non-character. He needs to figure out what's next because he seems to be tired of parts like this one and he's too charismatic to convey tired for the next chapter of his career. Reynolds makes out a little better, but you can almost see him growing weary of his attempts at witty schtick as more of his attempts at humor thud than usual. It feels like everyone thought casting would be all it took to make “Red Notice” charming and then forgot to give their actors charming things to actually do. Oh, there’s a lot of running and a lot of banter, but it starts to blend into cinematic paste.

People have lamented the growing sensation that Netflix increasingly makes product that’s designed to be watched with a phone in your hand, and I’m not sure I’ve ever felt this more strongly than while watching “Red Notice.” Made for $200 million, none of that fortune was spent on anything that retains a human touch—it’s the iPhone app of action movies. Look up and see a beautiful person in a beautiful place running or shooting something—go back to your phone. While there are some truly goofy and yet somehow predictable twists, there’s almost no real story here, certainly not a memorable one. And the settings, while often gorgeous, somehow lack personality too. Even the title sounds like something grabbed out of an Action Movie Screenwriter program.

So much money, so much charm, so much movie, and yet it adds up to so very little. “Red Notice” is as disposable a movie as you’ll see this year, something that most Netflix subscribers will have trouble remembering exists weeks later. It sets up a potential franchise in its final scenes (because of course it does)—let’s hope everyone involved forgets about that too.

In theaters tonight, November 4th. On Netflix on November 12th. 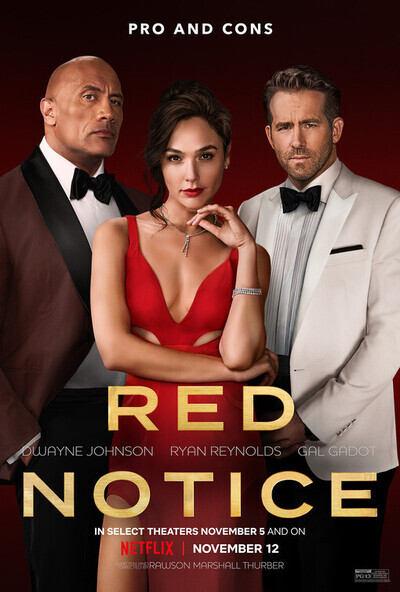 Rated PG-13 for violence and action, some sexual references, and strong language.