Disney’s “Raya and the Last Dragon,” available this week in limited theatrical release and on Disney+ for an extra fee, is a wonderful adventure. Blending imagery and mythology from several Southeast Asian cultures into its own vision, it's an ambitious family film that will work for all ages, and one that never talks down to its audience while presenting them with an entertaining, thought-provoking story. It also contains some of the most striking imagery Disney has ever produced, dropping its characters in a world that feels both classic and new at the same time.

Raya (Kelly Marie Tran) has long heard the stories of the last dragon from her father Benja (Daniel Dae Kim). As a villainous force was working its way across the land, turning people into stone, magical dragons united their forces together into a stone and one named Sisu used it to stop the pending apocalypse. She sacrificed herself in the process, although rumors persist that she survived. That stone resides with Benja and Raya’s people when the film begins, but the other clans of the now-divided world steal it, break it into pieces, and scatter it across the land.

Years later, Raya goes on a quest to find both Sisu (Awkafina) and the fragments of the stone, trying to bring her people back together and fulfill her father’s vision of loyalty. Along the way, they are chased by the princess of a clan seeking full power named Namaari (Gemma Chan), and encounter several memorable supporting characters, including the gregarious Boun (Izaac Wang), one-eyed Tong (Benedict Wong), and even a “con baby,” a kid who uses her undeniable cuteness as an alley con artist. All of these lively characters were impacted by the stone’s fragmentation, and they form an unforgettable core in what is basically an old-fashioned adventure movie that recalls everything from Indiana Jones to "Princess Mononoke."

Directors Don Hall (“Big Hero 6”) and Carlos López Estrada (“Blindspotting”) imbue every design element of “Raya and the Last Dragon” with top-notch craftsmanship. Each of the lands that Raya and her compatriots travel to feel like fully-realized worlds. Look at the streets in which Raya meets the baby and her monkeys-in-crime—they’re filled with bustling life and background detail that many movies like this simply ignore. And then there’s the character design, which is much more carefully considered than most modern blockbuster animation, particularly the gorgeous look of Sisu and her fellow dragons. Yes, she bears a strong resemblance to dragons we've seen in Asian cinema before—it’s hard not to think of “Spirited Away” when she takes her own form of flight—but she ultimately stands on her own, thanks in part to how her design melds with Awkwafina’s fantastic voice work. She’s expressive without being overly cartoonish. All of “Raya” has that going for it—a vibrant color palette and remarkable level of detail that never pushes too far into fantasy elements, achieving the perfect balance.

That balance is maintained because screenwriters Qui Nguyen and Adele Lim don’t get lost in their new animated playground, and never forget the story's emotional stakes. Raya isn’t just trying to bring her father back to life, she’s trying to reunite the world. It’s a smart film about one of the big themes of our current age—a quest for unity. The social and political readings of the movie will be plentiful because it’s about trying to find common ground and cause again after betrayals and division. One of the many things I love about it is how much it challenges the traditional superficiality of blockbuster animation, knowing that kids can handle more complex plots and themes than Hollywood usually gives them. One can enjoy "Raya" purely on an adventure movie level, but it will also likely start a few interesting conversations with children about trust, forgiveness, and courage. Is fear a result of distrust or the cause of it? Are we divided because we're enemies or because we're told we're enemies?

This is a rare criticism of studio animation, but “Raya and the Last Dragon” can sometimes be almost too dense with theme. In particular, the film's last half-hour has a habit of spelling out its ideas through dialogue more than it really needs to. The characters and storytelling are very strong, but I sometimes wished "Raya" would allow for more quiet development than the breakneck pacing chosen by Hall and Estrada. It has a habit of overexplaining itself when its imagery and narrative get the job done on their own.

The voice work is stellar throughout. Tran finds just the right mix of vulnerability and strength in Raya and Awkwafina locks into a register of optimistic wonder that’s infectious. The whole ensemble brings their A-game: Kim grounds a father/daughter dynamic with just a few scenes, Wong is so fun that he could anchor a spin-off about his character, and Chan sells the complex arc of a young woman forced by her mother to act against her own beliefs. All of them are also ably supported by one of James Newton Howard’s best scores.

“Raya and the Last Dragon” could have been a traditional princess story—another tale of a young woman chosen by legacy or magic to save her people. It’s not that movie. It’s a story about fallibility and the uncertainty that often accompanies courage—wrapped up in an unforgettable narrative that pays homage to mythology that has come before while creating its own past, present, and future. Many films have felt dismissed because of the closure of theaters in the last year, not getting the attention that may have resulted from normal times. “Raya and the Last Dragon” is the kind of movie I wish I could have experienced in a crowded theater, but it’s also one that I’m certain won’t be lost to history and will find its audience. It’s too good not to.

In theaters on March 4th, 2021, and available on Disney+ the next day for an extra charge. 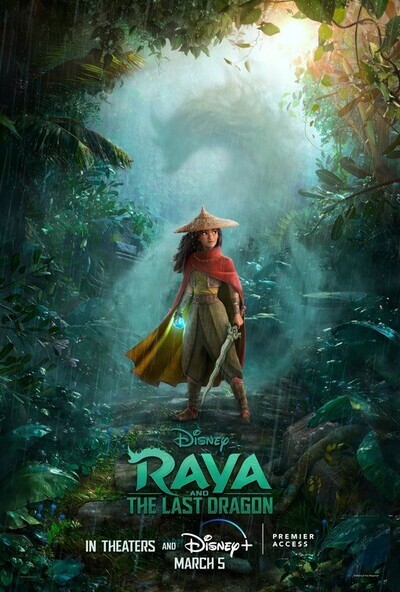 Rated PG for some violence, action and thematic elements.