Kidnapping thrillers often lull us into a sense of safety in the opening sequences, showing the normal rhythms of life that will soon be shattered. Denis Villeneuve's "Prisoners" does not go that route. It opens with a shot of a snowy forest, where a deer quietly noses around for food. Into the frame comes the barrel of a shotgun. We hear a prayer being intoned. Boom, the deer goes down. The camera pulls back to show a father (Hugh Jackman) and teenage son (Dylan Minnette), in day-glo hunting gear staring at their kill through the ranks of bare trees. On the drive home, the father, who seems humorless, intense, and a bit of a bore, lectures the son on how to always be prepared for the worst in life.

This opening is so heavy-handed that it's amazing that the film doesn't instantly collapse under its symbolic weight. Shot by the great Roger Deakins, regular cinematographer for the Coen brothers, the movie is drenched in rain and drained of color. Aspects of "Prisoners" are effective, but for the most part it's rather ridiculous (despite the fact that it clearly wants to be taken super-seriously), and there's an overwrought quality to much of the acting.

Keller Dover (Jackman) is an independent contractor who lives with his wife Grace (Maria Bello) and two kids in a suburban neighborhood. He loves Bruce Springsteen, "The Star-Spangled Banner," hunting, and hoarding canned goods, gas masks, and survivalist gadgets in his basement. On Thanksgiving, the Dovers go to dinner with a neighboring family, Franklin and Nancy Birch (Terrence Howard and Viola Davis), who have two kids the same age. While the parents drink wine and talk in the living room, the two little girls ask if they can take a walk. It is a walk from which they do not return. Panic ensues, especially when it becomes clear that a creepy RV, which had been seen parked in the neighborhood earlier, has vanished. Detective Loki (Jake Gyllenhaal) is assigned to the case.

The RV's owner, Alex Jones (Paul Dano), is dragged in for questioning. Forensics say the RV is clean of physical evidence, but Alex is strange. he speaks in a whispery high voice that makes him sound like a pre-teen. It is not inconceivable to think that he may be hiding something. This is clearly Dover's take, and he and Loki immediately start to butt heads about the course of the investigation. When Jones is released due to lack of evidence (into the custody of his aunt, played by Melissa Leo), Dover takes matters into his own hands, kidnapping Jones, and holding him hostage in an abandoned dilapidated building. Dover loops in Franklin Birch on his plan to beat the truth out of Jones. Birch is horrified at the sight of Jones tied to a sink, but he ignores his own moral compass in the face of Dover's furious certainty. This is one of the subtler points of the script: how certainty can override doubt with sheer force, and how doubt is often essential to maintaining our humanity.

Hugh Jackman huffs and puffs and screams and roars throughout the film, and it becomes monotonous, but what all that behavior tells us is that this is a weak man who needs to feel powerful. In one telling moment, while murmuring the "Our Father," he is unable to say "as we forgive those who trespass against us." He has a veritable arsenal in his basement, his family could withstand a mustard gas attack as well as the Zombie Apocalypse, but he couldn't protect his daughter on a simple walk through a safe neighborhood. And he's so convinced that Alex Jones is the guy that he is blind to other possibilities. Meanwhile, his wife lies in bed, tranquilizing herself into a stupor.

Gyllenhaal is great here in a role that must have looked rather uninteresting on the page. Aaron Guzikowski's script, so packed with religious symbols that verges on a sermon, is excellent in its spare and compelling portrait of Loki. The only image of the character outside the context of his job is his introductory scene, eating Thanksgiving dinner in an empty, fluorescent-lit Chinese restaurant as the rain batters down outside. The only thing we learn about his past is that he was in a boys' home and was raised in foster care. His knuckles and neck are sprinkled with tattoos, including a cross on one thumb. He's got a facial tic. We meet a lot of creeps in "Prisoners", and you get the sense that Detective Loki could have been one of them if he hadn't become a cop. It's a nice performance from Gyllenhaal, and its subtlety is welcome considering all the teeth gnashing going on in other performances.

Director Villeneuve gives us a couple of truly suspenseful scenes. One is a chase through the nighttime back yards of the neighborhood after a candlelight vigil for the two girls. The interiors of the houses seem gloomy and cramped, with walls cutting into the frame and characters coming in and out of sight: a visual correlative for the idea of people cut off from one another. But as the plot goes into high gear and we get other suspects, basement lairs and a glimpse of vast conspiracies, "Prisoners" wears out its welcome. 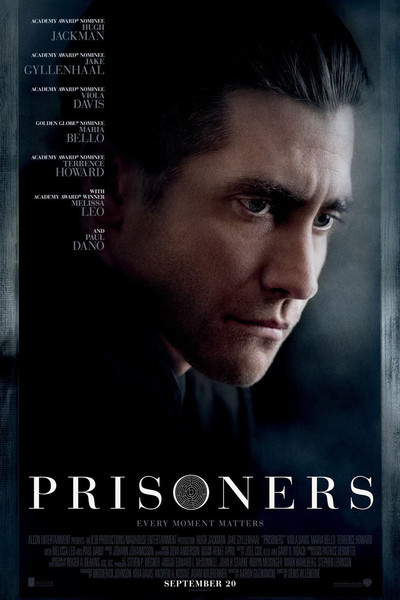