It's an irony, but there you are: The two best films about the life of the passionate British novelist D. H. Lawrence are based on his fiction. They are "Sons and Lovers" (1960), with Dean Stockwell playing a Nottingham miner's son (obviously based on Lawrence's memories of his own childhood), and "Women in Love" (1969), with Glenda Jackson, Alan Bates and Oliver Reed in a sexual tangle that reflected Lawrence's liberating view of sexuality.

Now comes "Priest of Love," a movie based on a biography of Lawrence and some of his letters and memoirs. This is said to be a factual biography, but, of course, any screen biography is fiction -- in this case, the imaginative impressions of the filmmakers about the life of a man they never knew. In "Priest of Love," we see many of the actual places where Lawrence lived, and the homes he occupied there, but we don't learn much about the man. Certainly not as much as we could intuit from those two earlier films (and learn from his books, of course).

I believe that underlying poetic truths about people's lives are more important than the facts, anyway. It doesn't matter when you were born, but it does matter what kind of relationships you had with your fellow travelers through life. "Priest of Love" doesn't seem that interested in Lawrence's inner life, though. It's more concerned with arranging attractive photographs of the period he lived in. It gives us all the correct costumes and props and attitudes, but when it comes to what made Lawrence live and breathe, the movie falls back too easily on talk about "genius."

The great British actor Ian McKellen, fresh from his triumph in “Amadeus” on Broadway, does an interesting job of impersonating Lawrence. He looks something like him, he doesn't overact a role filled with temptations for bombast, and in the scenes where he is seen writing, we get the impression that there is thought behind his writing, and not just an actor's pushing of a pen.

But McKellen is sandbagged by a script that requires him, too, to fall back on nonsense about genius and the poet's mission. I was reminded of the story about the time publisher Bennett Cerf told James Joyce's wife, Nora, that her husband was a genius. "It's easy enough for you to say that," Nora sniffed, "as you do not have to live with the man."

The action in "Priest of Love" tends to avoid Lawrence's childhood, which was in some ways the most interesting period of his life. We see young Lawrence in misty, ill-defined flashbacks -- picture postcards about early loves and dead family. The adult Lawrence is bedeviled by censors, hounded by the British press, and splashed all over the scandal sheets after his marriage to Frieda Lawrence (the press could not forgive Lawrence for marrying the sister of the German flying ace Baron von Richthofen, or for the fact that he took her away from a husband and three children).

The Lawrences set sail for America and the art colony run in Taos, N.M., by the eccentric patroness of the arts Mabel Dodge. It is fascinating to see Ava Gardner playing Dodge; at 60, Gardner is beautiful, mysterious and just right for this role. But by then we've lost interest in the movie. It doesn't set up conflicts, only arguments, and it doesn't generate suspense, only curiosity. I have the notion that D. H. Lawrence, if he could see it, would wonder who it was about. 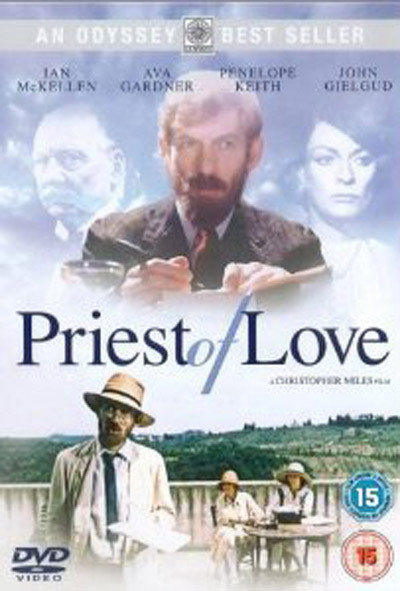