“Please Baby Please” plays like the love child of John Waters and David Lynch, with the queer campiness of the former intermingling lushly with the unsettling surrealism of the latter.

But while it’s drenched in style and features performances from an eclectic cast of actors who are deeply committed to the bit, and its expressions of erotic desire can be quite steamy, director and co-writer Amanda Kramer’s film feels limited and grows tiresome rather quickly. The heightened artifice of the setting, which is so amusing at first, soon reveals itself as a superficial concept. And while Kramer’s script with Noel David Taylor includes some delightfully deranged lines, the intentional archness becomes overbearing in its one-note nature by the end of the first act. Some scenes feature characters sitting around spewing bad beat poetry, but, in time, it all feels like bad beat poetry.

“Please Baby Please” grabs you off the top, though, as a leather-clad gang of ’50s street toughs called the Young Gents dances and snarls its way through the foggy, trash-strewn streets of lower Manhattan. They kick, leap, snap, howl—a heavily winking homage to both “West Side Story” and “The Wild One”—before brutally beating an unsuspecting couple on the sidewalk with pipes and wrenches.

Newlyweds Suze (Andrea Riseborough) and Arthur (Harry Melling) witness this attack and find that it stirs something unexpected in them. Previously adherent to traditional gender roles, the husband and wife begin exploring more fluid sexual identities with a mixture of terror and titillation. Adopting an exaggerated New York accent, Riseborough is ferocious, crawling around on the ground and approaching her co-stars with an animalistic physicality. As she spends more time bantering with the Young Gents, Suze’s signature cat eye and teased-up ‘do steadily transform into a more butch lesbian look and ultimately into the sort of fetishistic ensemble you’d see on a figure from Tom of Finland. A gleefully vampy Demi Moore, appearing briefly as the couple’s ritzy upstairs neighbor, also inspires Suze’s evolution. Shifting her trademark husky voice into a higher, breathier register, Moore teases with playful lines like: “I’m a wife, but I’m no wifey.” More of her would have been welcome.

Meanwhile, the meek and gentle Arthur enjoys an unexpectedly tender connection with the gang’s leader, Teddy (an alluring Karl Glusman). A wannabe Brando, he cuts a seductive figure with his sharp cheekbones and soulful eyes, and he’s more introspective than his tough-guy façade would suggest. While their scenes together have an exciting sexual charge, they’re also bogged down with seemingly endless and banal conversations about the nature of masculinity. (A sample: “Men get away with everything. But I’m not interested in getting away with anything.”)

Yet within this grandiose morass, every once in a while, there’s a legitimately striking moment. A heavily made-up platinum blonde stands in a phone booth in an empty parking lot. Suddenly, everything is covered in an explosion of roses—the booth, her dress, her eyes—as she sadly, sweetly croons The Skyliners’ “Since I Don’t Have You” to an unknown lover on the other end of the line. This scene is a great example of how the film’s minimalist set design results in a powerful aesthetic. The apartment furnishings are all super stripped-down—Moore’s supposedly luxurious abode consists of a bunch of fake-looking kitchen appliances and blocks in the place of furniture, all drenched in a bold cobalt blue. And the lurid lighting offers the kind of shock you’d experience in a Giallo film—rich shades of red, blue, and purply-pink that immediately grab you and hold you in their spell.

Kramer takes some big swings here, both tonally and visually, and that kind of singularity of vision is thrilling in itself, but “Please Baby Please” far too often tells rather than shows, as its characters melodramatically and incessantly pontificate. The self-awareness of these exchanges is clearly the point, but they become repetitive and wearying. 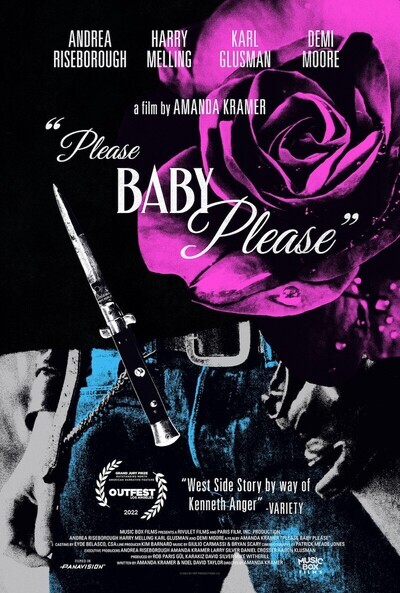