There is probably a movie critic’s code of conduct out there that requires reviewers to maintain an open and unprejudiced mind when plying their trade. Perhaps similar to what the Boy Scouts have. Or maybe more like the Cosa Nostra creed.

But I have found it often pays to lower one’s expectations to rock bottom to avoid the agony of disappointment when encountering a potentially dicey film.

That is how I came to fully expect to be underwhelmed by "Planes: Fire & Rescue," despite its blessedly brief 80-minutes-or-so running time, minus the interminable end credits that are a hallmark of tech-loaded animation.

This assumption was based on its 3-D predecessor from last year: "Planes," a onetime straight-to-DVD Disney effort inspired by Pixar’s "Cars" that was presumably upgraded to a theatrical release when someone noticed they could sell a bazillion more tie-in toys that way.

Financially, "Planes" proved a smart idea, soaring to more than $90 million at the box office—critics be danged. Artistically, it was a bit of a bust with its generic race-around-the-world plot that pitted underdog crop-duster hero Dusty Crophopper (featuring the gumption-stoked voice of comic Dane Cook) against some borderline-questionable ethnic stereotypes as competitors. If I never again see El Chupacabra, the chubby Mexican lothario who proved that aviation and a parody of "Nacho Libre" don’t quite mix, it would be muy bueno.

The sequel, which thankfully drops the contest aspect, has somewhat of a shaky takeoff as it relies once again on art design only a slight step above TV cartoons (save for the depiction of wildfires) and the same zip-zoom-vroom aeronautical stunts as before against a barren Midwestern backdrop. It doesn’t take long before the first of several flatulence jokes resounds—always a tyke pleaser, natch.

But, surprise, surprise. This "Planes" quickly grounds itself with a story that at least offers an emotional hook (if not ladder) that most adults and even kids can appreciate. Namely, the sometimes-fatal risks that firefighters regularly take for the sake of people they don’t even know.

It all starts with a mechanical malfunction. Whereas Dusty’s Achilles’ heel last time was his fear of heights, now it’s his broken gear box (a sort of stand-in for a bad ticker) that is holding him back from reaching optimum speed. After a scare mid-flight while practicing his tricks for the local Corn Fest, the old-style single-engine prop plane must deal with the news that the part is no longer being produced and his racing days might be over. As he changes course by signing up to learn to be a forest firefighter at Piston Peak National Park, Dusty must once more temper his overconfidence and fears in order to succeed.

"Planes: Fire & Rescue" doesn’t need a niblet-filled festival to come off as corny. But, in a way, its retro feel is a refreshing breather this summer. There is a rather elaborate parody of the old TV show "CHiPs"—called "CHoPs," named for the helicopters used to put out fires. It's a nice touch that Erik Estrada shows up in a voice cameo. And the tone of that buddy cop show seeps onto the screen

The plot also has the same sort of disaster-flick sensibility that was popular in the ‘70s in films like "The Towering Inferno." Instead of the world’s tallest building being threatened, it is a newly reopened luxury inn at the park’s tourist spot known as the Grand Fusel Lodge (one of a fleet of occasionally clever vehicular puns that are aimed at adults).

At certain points, the backdrop of a human-free universe remodeled for planes, trains and automobiles is stretched too far. There is something rather surreal about a hotel for all manner of transportation. Basically, the lobby is what amounts to a cavernous parking lot inside a piney structure and who knows if these cars and such actually sleep in a bed or care about the chocolate mints on their pillows. Better not to think too hard and instead join in with the knowing chuckles that will be elicited by this patron’s complaint heard at a motor-oil saloon: "She left me for a hybrid. I didn’t hear it coming."

Although the characters continue to represent overly familiar archetypes, the voices at least are more distinctive. While Cook nicely takes it down a notch, Julie Bowen from TV’s "Modern Family" puts a nice comic spin on Lil’ Dipper, a feisty firefighter gal who has the hots for Dusty aka Dust Muffin. Hal Holbrook adds folksy poignancy to Mayday, an old fire-and-rescue truck past his prime—when he swears, he says, "Oh, Chevy!" Ed Harris summons a wounded sense of authority as Blade Ranger, a veteran flame snuffer and Dusty’s mentor who is haunted by his past.

Yes, the strong yet spiritual-minded helicopter known as Windlifter, whose propeller blades are painted like feathers, is a Native American throwback to less forward-thinking eras. But much is forgiven by the fact someone had the forethought to hire Wes Studi of "The Last of the Mohicans" to speak for him.

Don’t get me wrong. "Planes: Fire & Rescue" won’t ever be mistaken for a classic, especially not with its happy ending that exists primarily for the benefit of future sequels. But it has to be healthier and more edifying for a child eight and under to watch this rather than a "Transformers" movie. Besides, any film with the insight to hire the married comedy team Jerry Stiller and Anne Meara as an elderly anniversary couple named Harvey and Winnie—yes, they are RVs—at least has some creative juice in its tank. 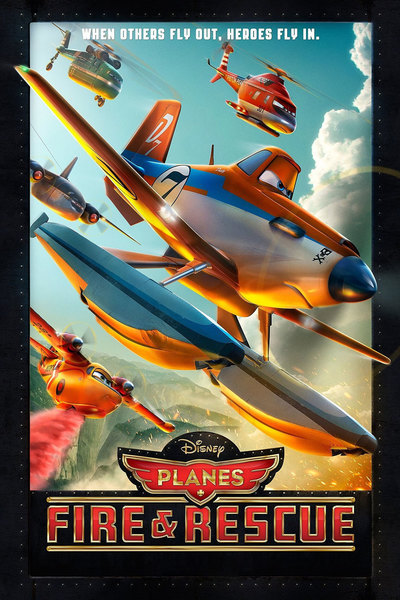 Rated PG for action and some peril

Fred Willard as Secretary of the Interior (voice)