Beware of critics gunning for Planes as if they were the Red Baron dive-bombing Snoopy. The aeronautical spin-off of Pixar's "Cars" franchise is carrying way too much unchecked baggage to be dismissed as yet another cartoon attraction in a summer already overrun with leafy warriors, collegiate monsters, high-octane snails, mumbling Minions and annoying Smurfs.

First, Disney—which owns the premier animation house that "Toy Story" built—had the audacity to put what was originally a straight-to-DVD release into theaters and pass it off as a "real" movie—and without the benefit of the kind of second-thought upgrades afforded to "Toy Story 2," a onetime direct-to-video project. Then a "Cars" logo was slapped on ads and posters, along with the tagline "From the world above Cars," perhaps causing some patrons to think "Planes" is a Pixar film instead a product of Disney's home-entertainment division. On top of that, they had the nerve to cram store shelves with beckoning toy replicas of the movie's cute flying machines, just in time to disrupt back-to-school shopping expeditions.

No one can fault Disney too much for seizing a money-making opportunity—especially once they realized they weren't going to make much "Hi-yo, Silver!" off of "The Lone Ranger." Instead, it all comes down to whether "Planes" will please its core audience of tots and their parents who want more of what "Cars" and its sequel (both probably the least-loved of Pixar's 14 features) gave them—a cleverly conceived human-less universe tweaked for vehicular inhabitants, zoom-y action stunts, hokey pun-filled humor and colorful characters. Judging on that scale, "Planes" modestly succeeds. Very modestly.

From the opening frames, adults will immediately notice a certain-stripped down sensibility, with the entrance of Dusty Crophopper (voiced with guy-ish gusto by Dane Cook), a Midwestern crop duster who dreams of competing in a race around the world against an eccentric flock of international competitors. It's 1965's "Those Magnificent Men and Their Flying Machines" but minus the men. Although there are plenty of swell loop-de-loop visual thrills in the 3-D-enhanced airborne sequences, the backdrops are barely filled out and eye-catching details are lacking.

The plot is generic to a fault, presenting Dusty as a typical fish out of water with big dreams whose fatal flaw is an inconvenient fear of extreme heights. The movie's flight plan follows the ups and downs of our brave little single-prop racer as he runs into an array of barriers—devious foes, a femme fatale, low fuel, bad weather and the ever-popular mechanical difficulties—while heading to such destinations as Iceland, the Himalayas and Mexico. Naturally, he has a crew of sidekicks including slow-witted fuel truck Chug (Brad Garrett), no-nonsense mechanic Dottie (Teri Hatcher) and Skipper Riley (Stacy Keach), a Navy Corsair who flew in World War II and is the grizzled-mentor answer to Paul Newman's Doc Hudson in "Cars." None will engender the sort of affection that is second nature in Pixar fare.

As for the globe-spanning cast, they are broadly drawn—and, in some cases, borderline offensive. Still, if you can buy El Chupacabra (Carlos Alazraqui), a chubby Mexican aircraft—imagine Jack Black in "Nacho Libre" with propeller nose—who woos slinky French Canadian she-plane Rochelle (Julia Louis-Dreyfus) with cheesy lines ("Are you tired? Because you've been flying through my mind") and a mariarchi band that performs a slow-dance version of disco anthem "Love Machine," little else that should cause navigational problems. Well, maybe Cedric the Entertainer's crotchety Southern-accented biplane Leadbottom.

There are references to "Cars" (those mooing cow-tipped tractors make an appearance) and in-jokes that those with ages in the double digits might appreciate. When villainous plane Ripslinger (Roger Craig Smith) sees that his iPad-like device (referred to as a Sky Pad) is broken, he shrugs it off: "A new one is coming out in two weeks." Still, considering that the appeal of "Planes" skews rather young, there are taste issues, including a disturbing scene that shows nearly an entire squadron of planes dying in an attack, and Dusty's manly reluctance to gain more speed by losing the dangling crop sprayer attached to his nether regions.

However, if you adjust expectations accordingly and watch the film through the mindset of a child, the minimalism of "Planes" might feel like a refreshing change of pace from the recent onslaught of loud CG spectacles. When a father walking out ahead of me asked his pint-size daughter how she liked the movie, she declared it as "Awesome!" with all the confidence a 5- or 6-year-old can muster. That is the opinion that counts. 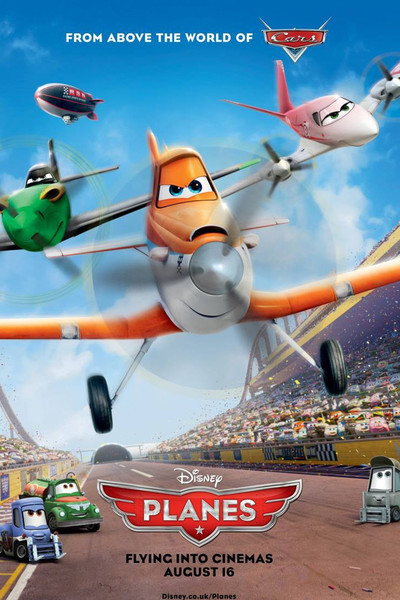