“Pitch Perfect 3” supposedly is the final film in the wildly successful series about the musical misadventures of the Barden Bellas. Lots of overlong, tearful group hugs after the final a cappella song make that clear.

But we really didn’t need a second “Pitch Perfect” movie, much less a third one. The first was a burst of energy and a breath of fresh air in 2012. Snarky but sweet with a diverse and likable cast, it gave us a vivid look inside a specific niche of the college experience. It joyfully made fun of its geeky milieu and it made a lot of money. It’s also the reason you hear that insanely catchy Anna Kendrick “Cups” song everywhere from the pet food store to the dentist’s office.

Hence, in 2015, we got “Pitch Perfect 2,” which was pretty much note for note and beat for beat the same movie as the original “Pitch Perfect,” despite the endlessly talented Elizabeth Banks making her feature directing debut. It made even more money.

So now we have “Pitch Perfect 3.” The best thing I can say about it is that it’s not another retread of its predecessor. Instead, Kay Cannon (who’s written the screenplays for all three movies) has blown things up entirely. She maintains the overly produced pop tunes as a through line, of course—it’s the only real source of cohesion, and it’s the reason you’re here. But it’s as if she and director Trish Sie (“Step Up All In”) decided to just go nuts in this final outing, turning it into a globetrotting, James Bond-style action picture. That doesn’t necessarily make it an improvement, but it’s at least an ambitious departure.

“Pitch Perfect 3” begins with the Bellas doing their signature dance-and-harmony bit aboard a mega-yacht to Britney Spears’ “Toxic” (which I’ll surely purge from my brain any day now). Kendrick’s Beca leads the group out onto the deck, Rebel Wilson’s Fat Amy bursts in with a fire extinguisher and the ladies all leap into the water just in time as the boat explodes behind them.

OK. This is different.

Then the movie flashes back three weeks to catch us up to that point. All of the Bellas are out of college now—except Hailee Steinfeld’s barely-there Emily—and struggling to find their voice (see what I did there?) in the real world. Beca has just quit her job as a music producer. Her roomie, Amy, never really has a job. And the ever-eager Chloe (Brittany Snow, game as always) has her heart set on attending veterinary school. The rest of the ladies are mostly an afterthought, each getting a line or two to update their status.

An invitation to join a USO tour and perform in Spain, Italy and France provides just the contrivance to reunite the Bellas for one last hurrah and prolong their avoidance of adulthood.

And that’s pretty much it concerning the flimsiness of the storyline that links one song to another. The numbers are lively as always, but with a sameness of energy and choreography that eventually makes them feel repetitive and numbing.

Several of the absurd throwaway lines are good for a laugh; as always, Kendrick is a master of the deadpan aside. And Wilson has such a wild energy and she so gleefully embraces the inappropriate that she sort of wills you into submission. You can’t help but like her—but also long for sharper material for her. And the movie leans heavily on the physicality of her comedy, as always, while adding a layer of butt-kicking bad-assery that strangely makes sense. But John Lithgow doing an intentionally over-the-top Australian accent as Amy’s shady, estranged father is a misfire and a waste of his formidable abilities.

Along those lines, “Pitch Perfect 3” is seriously overcrowded with new characters who never truly register, including not one but two blandly handsome potential love interests (Matt Lanter and Guy Burnet). Naturally, the Bellas find themselves in a competition while on the USO tour—this time against a generic pop-country group, a hip-hop duo and an all-female rock band called Evermoist (a name they keep saying over and over again, although it isn’t all that funny the first time). This leads to the obligatory riff-off across genres—a staple of all these movies—which feels more forced than ever.

And it wouldn’t be a “Pitch Perfect” movie without Banks and John Michael Higgins reprising their roles as the commentator duo serving as our passive-aggressive Greek chorus. This time, they insert themselves into the action as a bumbling documentary crew following the Bellas around on their tour. I’d almost rather watch their sloppy footage and snappy banter than this supposed swan song. 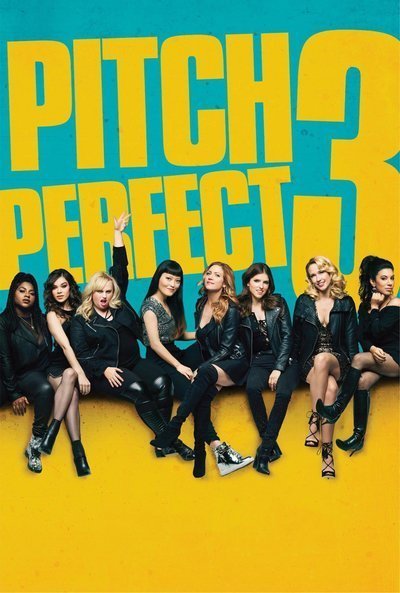