As second rounds of comedies go, “Pitch Perfect 2” definitely is not perfect. Its script is more than a smidge pitchy. And there are at least two reasons to protest its treatment of Anna Kendrick’s Beca, the once outsider freshman who took the all-girl Barden Bellas to new competitive a capella heights in the sharp, sassy and sweetly humble original film that sprouted into an eminently re-watchable sleeper success mostly via DVD and cable in 2012.

First, not only is the diminutive dynamo subjected to bouts of abuse about her lack of height in the form of two towering Teutonic twits from a rival group known as Das Sound Machine, now that the Bellas are competing on an international level. (Although her weird girl-crush on the intimidating Valkyrie-like female half of this bullying pair at least gives Kendrick something amusing to chew on).

But on top of that, Beca’s very presence in the film has been shrunk. In fact, she spends much of her senior year guiltily sneaking off to an internship at a recording studio to pursue her dream of being a music producer instead of devoting herself to boosting her fellow Bellas. That also means less time cuddling with tenor Jesse (Skylar Astin), whose all-boy Treblemakers are now more cohorts than foes. The one upside: As her distracted boss, Keegan-Michael Key delivers a stellar slam against hipsterdom involving that mystifyingly popular sauce known as sriracha.

Did someone forget how Kendrick helped to save the environment by teaching us a new way to recycle plastic cups the last time around and scored a Billboard top-10 hit in the bargain? Apparently so, since the country ditty “When I’m Gone” is briefly heard but sans percussive drinking ware. Perhaps clicking plastic spoons should have been considered.

Not that Elizabeth Banks, doing a workmanlike job in her directing debut while reprising her role as a snide a cappella commentator alongside John Michael Higgins (whose insensitive dig, “Let’s hear it for girls too ugly to be cheerleaders,” is way too Sue Sylvester circa the first season of “Glee”), and returning screenwriter Kay Cannon don’t try to find all manner of additions to distract us from the fact that this plot is basically the same as before: The Bellas, once again dispirited underdogs, must find a way to get their harmonizing groove back and triumph at a higher-stakes world championship in Copenhagen.

It is surprising that disco-era classic “More, More, More” by Andrea True Connection isn’t on the playlist because that seems to be the guiding principal at hand.

There is definitely more, more, more of Rebel Wilson’s lusty breakout, Fat Amy, starting from the opening when she makes an embarrassing sky-high entrance at the Kennedy Center after busting her too-tight Spandex britches in front of the President Obama and the First Lady and causing a media scandal by going “commando.” The sequence isn’t as funny as it thinks it is even if it is mocking the way female celebrity wardrobe malfunctions are exploited as click-bait (just ask Anne Hathaway). Then again, it is almost worth it just for introducing the term “Muffgate” into the lexicon.

Her romance with cocky swain Bumper (Adam DeVine, who was better in smaller doses back when he was a villain) also takes center stage as it progresses from the just-sex stage to possible commitment. Again, that results in one of “Pitch 2’s” high points, involving Fat Amy belting Pat Benatar’s “We Belong” while rocking a rather unsteady watercraft.

But for every moment of cleverness (among them, the treatment of the Universal Studios fanfare and this Fat Amy aside: “You’re the most talented person I know, and I’ve met three of the Wiggles—intimately”), there seems to be a half-dozen attempts at humor that strain for laughs. Most of the eclectic array of Bellas return, their once-endearing quirks now employed more broadly but to lesser effect. Low talker Lily (Hana Mae Lee) is scarier than ever as she whispers such non sequiturs as “All my teeth come from other people.” Upbeat leader Chloe (Brittany Snow) is still plagued by insecurity in her seventh year of college (she intentionally fails Russian lit to continue singing with the Bellas).

Among the newcomers, there’s Hailee Steinfeld (“True Grit”)—probably being groomed to take over from fellow Oscar nominee Kendrick—as pleasant legacy Emily (her mom is played by Katey Sagal) who possesses a nice lilting tone. Her major contribution to the Bellas, however, is her ability to introduce original material into their repertoire. Her tune “Flashlight” (actual writers include the superhot Sia and Sam Smith) is aiming to be the new “Cups,” but is more similar to Rihanna’s ode to another utilitarian implement, “Umbrella.” Unfortunately, Emily’s last name is Junk. The punchlines practically write themselves.

As for the a capella performances, there is something a little prefab and not as organic as those in the first film.  However, just as the impromptu sing-off in an empty pool was the musical standout in the first “Pitch,” so, too, is the one held at the mansion of a rich a cappella nut (David Cross) between top groups, including some of the beefier members of the Green Bay Packers—just one of a parade of star cameos. If you can’t enjoy hearing a medley of songs about appreciating large backsides (among them, “Thong Song,” “Baby Got Back” and “Bootylicious”) done in multi-part harmony, there is no pleasing you.

Alas, the final showdown is a letdown. It is always wise to give some leeway to comedies PC-wise, but even my usually open mind started shutting down when a montage of the global talent going up against the Bellas looked more like a stereotype-heavy homage to “It’s a Small World After All.” And, as much as it pains me to say this, I would have given the honors to Das Music Machine. Even if they are, according to Fat Amy, “Deustchbags.” 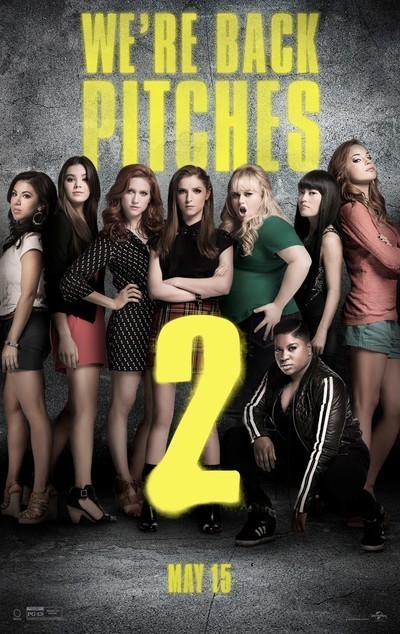