Step Up All In

Certainly you don’t go to a “Step Up” movie for the glittering repartee. You go for the dazzling dance moves. But even by the standards of this franchise—and this genre in general—“Step Up All In” is pretty laughable.

If only there were a way you could fast-forward through all the junk while sitting in the movie theater—the wooden delivery and barely-there characterizations, the tedious exposition and contrived conflicts—and just get to the performances. But alas, one must endure banal dialogue and a flimsy plot in order to enjoy the gravity-defying, acrobatic extravaganzas. It’s enough to make you wish they’d called the movie “Step Up and Shut Up.”

Instead, the title of this fifth film in the series is as bland as the members of the competing dance crews that populate it. Perhaps there’s some allure here for true devotees in that characters from previous installments return and collaborate, “Fast-and-Furious”-style. (Sadly, Channing Tatum—who began his rise to superstardom in the original “Step Up” back in 2006—is nowhere to be found. Then again, he has far better things to do these days.) If you’re a newbie, you won’t be lost—this isn’t exactly a Christopher Nolan film in terms of narrative complexity—but you’ll probably be checking your watch as you wait for the next dance number to start.

Director Trish Sie’s feature debut, with a script from John Swetnam, begins in lively fashion, though. Sean (the blankly handsome and hunky Ryan Guzman) and his pals in the dance crew The Mob work their butts off at commercial auditions while wearing ridiculous costumes and incorporating various products. It’s the dance-film version of a rom-com bad date montage. These are the performers who moved from Miami to Los Angeles after winning a spot in a high-profile Nike ad in the previous movie, 2012’s “Step Up Revolution," but now they’re finding that surviving as working dancers in L.A. is nearly impossible and decide to go back home—all except Sean.

He discovers a VH1 competition called "The Vortex," which will give one winning dance crew a three-year gig at Caesars Palace in Las Vegas. The host is the outlandish Alexxa Brava (the perky, Polish actress-dancer Izabella Miko), who clearly shops at the same boutique as Effie from “The Hunger Games.” She’s super dramatic in her delivery as she announces the teams and the rules, but it’s hard to tell whether she’s going for over-the-top parody or run-of-the-mill Vegas cheese.

Sean quickly assembles a new crew, including the good-hearted Moose (series veteran Adam Sevani), who brings the group together; the stubborn Andie (the Demi Moore-esque Briana Evigan from “Step Up 2: The Streets”); and the daffy Jenny Kido (Mari Koda, another series regular), who provides broad comic relief. There are so many characters crammed in here, though, that it’s easy to forget that some of them even exist. Which is the guy from Baltimore and which is the one from the Bronx? Doesn’t matter, really, as long as they hit their marks sharply.

And they do—they all do—in increasingly elaborate dance numbers. An early dance-off at a bar opposite the rival crew the Grim Knights is fun in an aggressive sort of way. The mad-scientist inspired performance they concoct for their audition tape is a highlight (but please don’t trouble your mind wondering how they got a hold of all those costumes and props and shot it all with multiple camera angles).

But the big finale where the top four crews in the competition battle it out for world domination is a lengthy and thoroughly enjoyable spectacle that makes all the preceding dreck worthwhile. It’s an awe-inspiring display of choreography, energy and athleticism. Naturally, the finalists include Sean’s new crew, his old crew and the crew they both can’t stand, led by a sleazy Stephen "Stev-O" Jones. (This is not a spoiler. This is the cosmically contrived way these things work out in movies like this, regardless of the kind of competition.)

Will Andie get over her fear of injuring her knee again and pull off that big, climactic stunt? Will Sean ever be able to pay his rent again? Will Sean and Andie kiss as knew they would from the first second they met, despite a complete lack of chemistry? And where did they get the flaming torches for their climactic last dance? Shutting off your brain and putting on your dancing shoes seems to be the only appropriate answer. 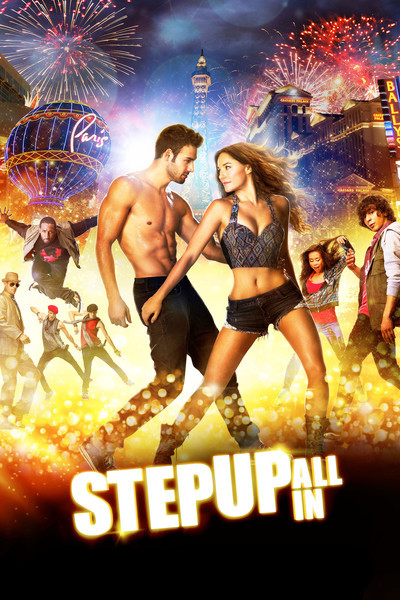 Rated PG-13 for some language and suggestive material