François Ozon's "Peter von Kant" is an odd, chilly film, even by this director's standards. A psychological drama about a filmmaker in mid'-'70s Cologne, it gender-flips Rainer Werner Fassbinder's 1978 "The Bitter Tears of Petra von Kant," about the relationship between the eponymous fashion designer (Margit Carstensen), her nonspeaking assistant Marlene (Irm Hermann), and a young woman named Karin Thimm (Hannah Schygulla) that Petra pulls into a codependent relationship by promising to help her become a model. In Ozon's reimagining, the fashion designer has been changed to a successful filmmaker named Peter (Denis Ménochet), unabashedly modeled on Fassbinder himself. His mute and unfailingly obedient assistant is Stefan (Stefan Crepon), a waifish young man with a wisp of a mustache. And the young target of his lust is now a beautiful young man of Arabic extraction named Amir (Khalil Gharbia).

"Peter von Kant" isn't a shot-for-shot remake of "Petra," or anything close to that. A few of the symmetrical exterior establishing shots are Wes Anderson-like, and the credits even use the font from Anderson's early films, Futura Bold. Ozon's version jogs through the story where Fassbinder lingered, often in eerie silence—it's thirty minutes shorter than Fassbinder's. But it replicates the overall story, all of the key scenes, and a lot of the dialogue, seemingly confident that the obvious changes will alter how it all plays.

The key word is "seemingly," because Ozon, as is his preference, doesn't tip his hand as to how he feels about any of these people or this situation. It's questionable whether the film will hold the interest of a viewer who never saw the original and has no idea that they're watching something that could be considered some kind of remake. Those who have seen the original might be fascinated even though what's happening onscreen is an intellectualized type of cinematic karaoke, falling somewhere between the gender-flipped "Ocean's 11" remake "Ocean's 8" and the sections of Quentin Tarantino's movies where he's sampling and remixing bits and pieces of movies that fed his imagination (sometimes to the point of re-using tracks from pre-existing classic film scores, as Ozon does here when a remake of a Fassbinder scene uses exact same needle-drop as Fassbinder, the Walker Brothers' "In My Room"). The "why" of it all is at once the fuel that powers whatever attention the viewer can summon and the thing that keeps it at arm's length.

Still, for better or worse (or neither), the result is the most inscrutable cinematic fetish object since Gus van Sant's 1998 not-quite-shot-for-shot color remake of "Psycho," which, like a few other Van Sant films, were as much thought experiments aimed at cinephiles as they were freestanding works of popular art. Where "Psycho" appeared to revolve around the unspoken question "Would audiences react in more or less the same way as they did in 1960 if we remade Alfred Hitchcock's classic thriller in color with contemporary actors while executing his directorial playbook like a symphony conductor working from sheet music?", Ozon's movie seems (to this viewer, anyway) to pivot on a different but equally out-there question: "What would happen if you reimagined a classic film that Fassbinder made partly to express his feelings about recent events in his own life, and changed superficial details so that we often felt as if we were watching a nonexistent docudrama about Fassbinder's life that Fassbinder never made?"

Ozon plays around with this notion throughout "Peter von Kant." An early scene in Fassbinder's film where the heroine is visited by her cousin Sidonie (Katrin Schaake) is restaged so that Peter is visited by a female cousin with the same name, but she's played by Isabelle Adjani, who wears a wig that faintly evokes one prominently displayed in Fassbinder's movie. Amir seems to be a composite of two important men in Fassbinder's love life. One is El Hedi Ben Salem, a Moroccan Berber who had a tumultuous and often violent relationship with the director and acted in three of his movies, including "Ali: Fear Eats the Soul." The other is Armin Meier (note the first name, as well as how the full name sounds when you say both words together quickly), an orphaned ex-butcher whose relationship with Fassbinder was the partial inspiration for an episode of "Germany in Autumn."

That "Petra von Kant" was itself a tactically opaque working-through of Fassbinder's own experiences (as was, and is, the case with all dramatists to some extent) creates an ouroboros effect in the mind of the Fassbinder-conscious viewer. The project seems to devour and digest its inspiration as it unreels, possibly in attempt to return us to the place from where "Petra von Kant" came—though, again, who can say when the director holds his cards so close to his mid-'70s vintage, probably velour and tan vest? What's deposited in viewer's laps when the final credits roll is a question mark, which is exactly how Ozon seems to prefer it—and that's not a bad thing.

The actors are admirably committed—particularly Gharbia, who never telegraphs many hidden layers that Amir will ultimately reveal to us; and Ménochet, who captures a bit of Fassbinder's burly gossamer energy without trying to do an impersonation. He's an altogether more compelling Fassbinder-as-dramatic-construct than Oliver Masucci in Oskar Röhler's "Enfant Terrible" (which, curiously, also indulged armchair psychoanalysis of Fassbinder without taking the literal-minded, "Bohemian Rhapsody" and-then-he-did-this approach).

That almost nobody is making movies like this at the moment is a point in favor of seeking out "Peter von Kant"—although viewers should consider themselves forewarned that they will probably get more out of it if they take a lot into it, and that such a concern is probably the furthest thing from Ozon's mind. 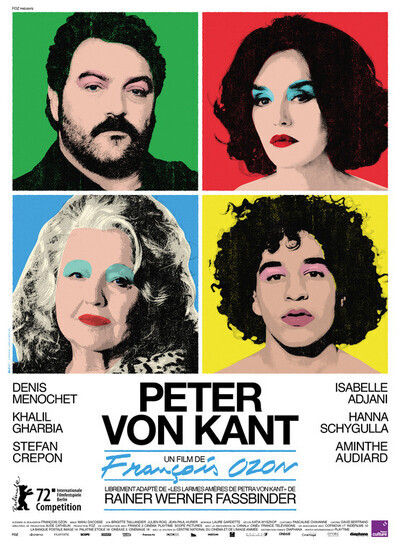 Writer (based on the film by)