German New Wave director Rainer Werner Fassbinder, the subject of Oskar Röhler 's film "Enfant Terrible," was one of the most daring, gifted, destructive filmmakers that ever lived. Original, provocative, and openly gay to a degree that was rare in the 1970s, Fassbinder started in underground theater and soon jumped to film, telling sexually and politically adventurous stories of past and then-present Germany. He worked so quickly and intuitively that he released between two and five features a year, plus TV productions, between 1970 and his untimely death in 1981 at age 37.

His films were intensely sexual, openly emotional, and psychologically as well as physically violent, often dealing with the authoritarian impulse in private lives as well as societies. His formally precise yet often expressionistic approach influenced many filmmakers, including Paul Verhoeven ("Soldier of Orange" and "Spetters" seem to have an especially strong Fassbinderian streak), Martin Scorsese ("Mean Streets" and "Taxi Driver" in particular; for a while, Scorsese employed Fassbinder's regular cinematographer, Michael Ballhaus) and Bob Fosse (whose affinity for Federico Fellini and Stanley Kubrick is well-documented, but in retrospect had a lot of Fassbinder in him). Fassbinder was also known to be dictatorial, abusive, chaotic, self-dramatizing, unreliable, and a lot of other unflattering adjectives: the kind of "difficult genius" who seemed as if he was worth the grief during and immediately after production, but whose cruelties scarred his collaborators.

How can a single, feature-length motion picture capture such a titanic personality, with this many contradictions? And most of all, how can it walk that knife-edge, showing us why people believed in Fassbinder and wanted to give him money, work with him, and sleep with him, even as he smashed and burned his way through the international film scene, leaving ruin in his path?

Röhler's "Enfant Terrible" never gets a handle on that aspect of Fassbinder, that essential question. And it's so crucial to making "Enfant Terrible" work that this problem—might as well go ahead and call it a failing—undoes whatever magic that the film can work.

Built around a bulldozer of a lead performance by Oliver Masucci—who carries on with rough-trade swagger, portraying Fassbinder as a demonic bully who gets into people's heads—the entire story is presented as if it were an early Fassbinder experiment, half-in and half-out of the late-1960s black box theater scene. Actors inhabit key moments in Fassbinder's life on stage sets with minimal props. In a bar scene, for example, the stools, the bar itself, and important objects are three-dimensional props, but the liquors and glasses and mirror behind the bar are painted. There is no audience save for the viewer. Characters often storm on- and offstage from the wings. Even locations that would seem to cry out for grand cinematic treatment (including nightclub exteriors, alleyways, major thoroughfares, and indoor banquet halls; there's even a rain scene) are presented as stripped-down stage tableaux, seemingly with the expectation that viewers will use their imagination to fill in what's not there, as they would if they were attending a play in a 40-seat underground theater in Munich.

This is a marvelous conceit, true to the spirit of early Fassbinder in a couple of ways. One, Fassbinder's theatrical experience shaped his conception of what "good acting" was, and he carried it over to cinema (realism didn't interest him; energy and attitude did), and he was just as much of a self-driving workaholic under the proscenium as he was on film sets: he wrote 14 plays, adapted six classic plays by other playwrights, and directed or co-directed 25 more plays by other writers. Second, it's a money-saving measure that's indistinguishable from a bold stylistic gamble—the kind of thing Fassbinder did a lot when he was just starting out in film, shooting fast and cheap in the manner of the French New Wave films he admired, on available locations and cobbled-together "soundstages" that were often just a warehouse or apartment that he managed to borrow for a day.

What's unfortunate (and a bit puzzling) is that "Enfant Terrible" ends up being a quite conventional biography in terms of storytelling. It jumps from one high or low point in Fassbinder's life to the next as breezily as possible, in the manner of a Hollywood biopic that tries to cover everything but ends up covering nothing thoroughly. From major productions to personal relationships, most of the bits that you expect to see included are at least touched upon, either in the form of self-contained set-pieces (there's a re-creation of Fassbinder's snarky, punk-ish press conference after his 1969 film "Love is Colder than Death" got booed at the Cannes Film Festival; you can watch bits of the real thing here); or as, essentially, chapters, in both the novelistic and DVD menu senses of the word, taking us through the life of Rainer Werner Fassbinder, genius filmmaker and toxic man.

Any of Fassbinder's relationships with his key collaborators might have merited its own film, so revealing were they of his artistic gifts and personal demons. But for the most part, the treatment here is rather cursory, defined entirely in terms of how Fassbinder used people and what that manipulative behavior revealed about his own lack of conscience or impulse control. It's also very male-centric; Fassbinder's gift for creating complex, troubled, dynamic female characters is barely touched on, Hanna Schygulla, the director's most acclaimed leading lady; Ursula Strätz, founder of the Munich Action Theater, where Fassbinder started out; and Barbara Valentin and Brigitte Mira, costars of "Fear Eats the Soul," are barely acknowledged. The film is mainly interested in what a monumental jerk Fassbinder could be, treating theater companies, film crews, actors, producers, lovers, and family members like obstacles, raw material, or garbage, depending.

The structure of the film rarely pauses for examination, much less self-examination (or for that matter, for examination of whether Fassbinder was capable of self-examination, which would've been just as interesting; based on what we see here, the answer as pretty clearly "no"). As a result, it sometimes plays like a Scorsese crime film without the narration, ironic distance, or satirical verve, instead meticulously presenting scene after scene of an asshole being an asshole, when he's not expressing guilt, sadness, and torment. These come across as manufactured because he's a hopeless alcoholic, cokehead, and sex addict who ruins his body as he blasts through the international film scene.

Fassbinder comes on strong with Morrocan El Hedi ben Salem (Erdal Yildiz) in a club, beginning a sexual relationship with immediately even though he has a wife and two teenaged boys back home, casting him in his future classic "Ali: Fear Eats the Soul," and treating him so abominably throughout the process that it reduced the performer to a self-flagellating wreck; already a heavy drinker, Salem would go on to stab three people (not fatally, thank goodness) before returning to Morrocco, where he was arrested, sent to prison in Nimes, and hanged himself. All this is maybe a ten-minute stretch in the film that has to compete with all of the other things happening at the same time in Fassbinder's life.

The whole movie is like this. It maintains a hypnotic pull throughout. It hits the marks. But it rarely hazards an understanding of the madness in Fassbinder's method, or vice-versa, much less the underlying question of whether much of Fassbinder's art amounted to an illusionist's trick: a charismatic, intellectual, substance abusing poet-monster cranking out reams of work and hoping that the sheer profligacy and energy of his vision would paper over cracks in conception. But for all his hucksterism and mumbo-jumbo, Fassbinder, to quote McCabe in "McCabe and Mrs. Miller," had poetry in him. Where's the poetry here? The movie has theatrical verve, but it lacks poetry.

The presentation of Fassbinder doesn't help. As portrayed throughout by Masucci—who's twenty years older than Fassbinder was when he died, with a beefy physique and a chiseled face, though admittedly we can (and maybe should) wave all of that away by saying, "It's theater—Who cares?"—the character never quite gets across the quicksilver-minded and impish energy that others described in Fassbinder, and that made him very hard to resist, even when others already knew from secondhand stories or firsthand trauma how poisonous he could be. He was constantly pushing people's buttons, berating and cajoling them into doing what he imagined (and craved).

The movie has all that covered, perhaps too well. To watch "Enfant Terrible" is to witness an unending torrent of abuse that drives other artists to tears and breakdowns. Photos, documentary footage, and written accounts make Fassbinder come off as more of a baby-faced Germanic Bob Fosse-type, substituting talent and confidence for matinee-idol good looks—a man who, at least some of the time, radiated a seducer's charm, not just a smirking bully's playground dominance. Mascucci is more of a stereotypical alpha male, with wide shoulders and a barrel chest, potbellied but in ass-kicking shape. He's often dressed and lit so that he evokes a Tom of Finland pinup drawing, or Jack Palance moonlighting in a nonexistent Kenneth Anger biker porno. Maybe we're seeing Fassbinder as the filmmakers think Fassbinder would have portrayed himself if he'd directed this movie? It's impossible to say.

In any case, this movie-star-pig incarnation of Fassbinder is never dull, exactly, but it does get repetitious. And it feels like a deflection from the more elusive questions of who Fassbinder was; how, exactly, Fassbinder created Fassbinder; how he kept selling that character to other people; how much of his persona was rooted in genius and how much in unhappiness, and whether any of it was "real"; or if words like "real" even matter when you're talking about the mysteries of the human personality, the tangled poetry of the soul. All of these questions were enfolded in Fassbinder's art, and Fassbinder found them in those moments of connection or disconnection between individuals. Accordingly, the film is at its strongest when it's simply focusing on people's faces as they talk to each other, stare into one another's eyes, and watch one another walk out of a room, perhaps never to be seen again. 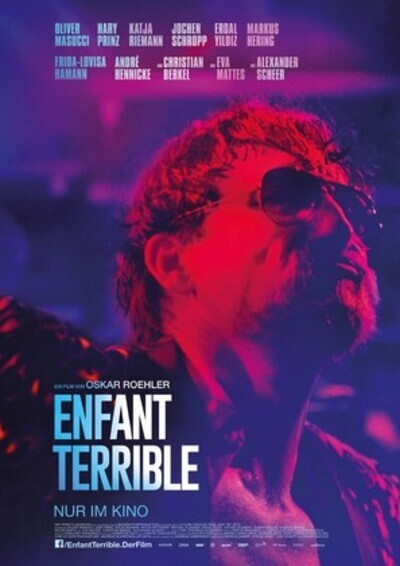