The German lo-fi sci-fi character study “In My Room” is for anybody who’s dreamed and/or panicked about the existential terror and romantic solitude that attends a classic doomsday scenario: what if you were the last person on Earth?

We follow Armin (Hans Löw), an aimless 40-something year-old bachelor, before and after the rest of humanity inexplicably disappears. Armin’s character reveals itself through incidental plot details: before he’s left to his own devices, he cares for his ailing (and practically comatose) grandmother, but doesn’t want to talk to his father (Michael Wittenborn) about how he’s moved on and found a younger lover (Katharina Linder). Armin’s also a bit clueless around women, as we see in the scene where he, about to make out with a young lady wearing a “Ride the Lightning” t-shirt, motions to put on some pre-coital music (“I don’t have any soft rock”), and then tells his companion that she can’t use his toothbrush. Once he’s alone—through events that are blessedly never explained or dwelled upon—Armin builds his own shelter, cares for animals, loses weight, and haunts his family’s home like a living ghost. A lot happens in “In My Room,” but most of it occurs on an appropriately microscopic scale.

In the movie’s press notes, writer/director Ulrich Köhler (“Sleeping Sickness”) orients viewers, somewhat. I’m not sure if the following paraphrase contains spoilers, but I do know that one of the main pleasures of watching “In My Room” comes from feeling your way around, enjoying the ambient sound design, and making your own thematic connections. With that said: Köhler writes that Armin is representative of his Gen X and middle class background in the sense that he’s well-off, but “afraid of commitment.” He compares Armin to Robinson Crusoe, and says that the character already had those qualities in him before he became the last man on Earth. Köhler sees Armin dealing with his emotional “baggage” even now in this high-concept scenario … and for the most part, Köhler’s reading of Armin bears out in the movie.

One minor quibble: “afraid of commitment” is uncharacteristically harsh. Köhler and Löw do unveil little “ironies” about Armin’s self-image and the way that he behaves under stress, like when Armin smashes down his missing father’s door before he really knows what’s happened, but then sticks around his family home, as you might imagine based on the film’s Beach Boys-alluding title. Armin does, however, show that he’s willing to do the work of caring for some things, even if his lack of experience is exactly the sort of baggage that Köhler refers to in the press notes. Armin is, in that sense, too rich of a character to be reduced to what he represents. He’s believably schlubby, despite also being a dedicated survivalist. He’s also too lazy to take great care of himself (mind that leg wound!), but he does go out of his way to care for a lost goat, chase off a wild fox, build a hay-filled loft, and eventually develop a romantic relationship with another survivor. That’s not nothing, right?

But maybe that’s already too many spoilers. It’s hard to know what is and isn’t worth noting when describing a movie like “In My Room,” a low-key drama that’s mostly pleasurable for the masterful, but gentle way that Köhler draws viewers into Armin’s world. The sounds of wind rattling a gas station flagpole, or the alternating whine of a car engine as Armin speeds around abandoned vehicles … that’s why you should see “In My Room.” You might also come to the movie for the generic pleasure of watching a disaster victim navigate an idyllic, post-human landscape.

There are also a few quietly engrossing scenes where Armin works his way around (and not directly through) his grief and learns from his inexperience, especially after the sudden arrival of Kirsi (Elena Radonicich), a fellow survivor with complimentary (not matching) baggage. In these scenes, Armin’s story takes on somewhat greater shape. But still: “In My Room” is basically the science-fiction equivalent of one of Brian Eno’s ambient soundscape albums. Its two-hour runtime will drag for anybody who’s looking for a grand theme or climactic plot.

Others may find “In My Room” to be a small gem thanks to Köhler’s eye for small details. He’s a keen image-maker; Armin’s story also resonates thanks to Köhler’s ear for naturalistic dialogue and novelistic detail, both of which serve the movie’s episodic narrative. Here, character is conveyed subtly through environment—some tall grass, dark clouds, broken glass—more than dialogue, through neurotic decisions that are only semi-transparent to a passive observer. You have to want to spend time with the film, and just go wherever Köhler and his collaborators take you. That requires a small leap of faith from viewers—especially those who haven’t seen Köhler’s previous films—but you hopefully won’t regret it. 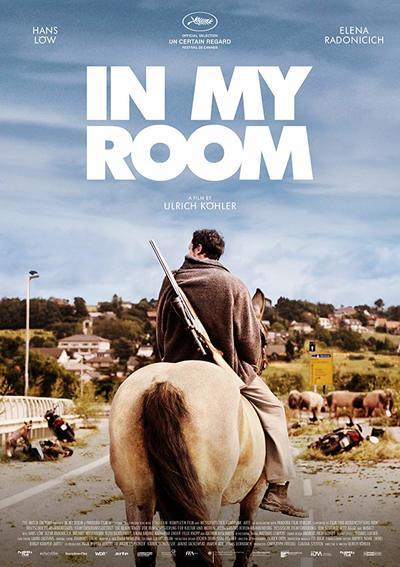