In the midst of this bloated summer blockbuster season crammed with comic book superheroes, here are your true avengers: the formidable female cast of “Ocean’s 8,” taking us on a giddy, fizzy escape while also making a pointed statement about the realities of the world in which we live.

It’s a heist flick, carrying on the tradition of Steven Soderbergh’s “Ocean’s” trilogy (Soderbergh serves as a producer this time), with all the elaborate machinations you’ve come to expect from the series. It is crime as high art—which is fitting, given that the robbery this time takes place at The Met Gala, the annual fashion extravaganza at New York’s Metropolitan Museum of Art. It’s also the most flat-out fun movie that director and co-writer Gary Ross has made since his directorial debut, “Pleasantville,” 20 years ago. Slickly paced and radiating sexy glamour, “Ocean’s 8” moves with the swagger of a supermodel prancing down the runway.

But beneath the couture gowns and glittering jewels, the high-tech equipment and good, old-fashioned sleight of hand, “Ocean’s 8” is about the power of women standing up for themselves, sticking with each other and making the impossible happen. Years of planning and reservoirs of chutzpah certainly help, but the real reason these ladies are able to pull off this particularly daring crime in plain sight is simple: “A ‘him’ gets noticed. A ‘her’ gets ignored,” says Sandra Bullock as crew chief Debbie Ocean. “And for once, we want to be ignored.”

Bullock is coolly charismatic and totally in command in the title role, taking over as the George Clooney figure in this reimagining of the franchise. (Debbie is the estranged sister of Clooney’s late Danny Ocean, which the film addresses efficiently before moving on to the action.) After giving the performance of a lifetime to persuade the parole board to release her from prison, Debbie promptly returns to New York City and begins assembling the team she’ll need to pull off the crime she’s been planning for the past five years, eight months and 12 days.

Her first stop is Bergdorf Goodman for a dazzling bit of high-dollar shoplifting. And one of the movie’s many strengths is its use of recognizable New York locations; it grounds the film in contemporary reality and keeps it from floating off completely into the stratosphere. Besides that luxury department store, the ladies also visit the Ukrainian restaurant Veselka in the East Village, Junior’s diner in Brooklyn and, of course, The Met.

As in Soderbergh’s original “Ocean’s 11,” part of the fun of “Ocean’s 8” is watching Debbie handpick the women who will help her pull off this daring crime: stealing a one-of-a-kind, $150 million diamond Cartier necklace from the starlet who’s wearing it, right in the middle of the gala. Each brings a specific talent and energy to the team; together, they create an unpredictable, irresistible alchemy.

Bullock especially has great chemistry with Cate Blanchett as Lou, her longtime partner with whom she enjoys a smart and playfully spiky repartee. The ever-changing Blanchett is all rock-and-roll bad-assery here—but in an intriguing twist, she also serves as the voice of reason compared to Bullock’s wildly ambitious Debbie.

Together, they round up Mindy Kaling’s Amita, a jeweler who’s used to doing shady work for Debbie but nothing quite like this; con artist and petty thief Constance (actress/musician Awkwafina, whose real name is Nora Lum), who brings a youthful, streetwise edge to the crew; Sarah Paulson’s Tammy, a reliable fence trying to live a quiet life as a wife and mom in suburbia; Rihanna as a resourceful hacker who goes by the name Nine Ball and solves every tricky security challenge with a low-key confidence; and fashion designer Rose Weil (Helena Bonham Carter), whose fame and clout provide the team with access to the star-studded event, even though her days of peak popularity are well behind her.

The final player is the one who doesn’t even realize she’s been recruited: Anne Hathaway as “It Girl” actress Daphne Kluger, who’s one of the gala’s hosts and whose neck will carry that expensive piece of shiny hardware. While Awkwafina is a breath of fresh air and Carter is her delightfully odd self, Hathaway is the film’s MVP. What she’s doing here is nothing short of inspired, controlled lunacy. She’s an actress playing an actress, which is always a juicy opportunity to ham it up. But Hathaway is clearly having a blast discovering all of this character’s colors, from preening egomania to dippy girlishness to insecure fragility. She’s pulled off a theft of her own here.

The sheer brazenness of the crime in “Ocean’s 8” is enough to put a goofy smile on your face. But as is always the case in heist movies, the sustained thrill of the high-wire act comes from watching the players lay out their complex plan, then seeing whether it actually goes as smoothly as they’d hoped. Ross and co-writer Olivia Milch give each of these ladies an opportunity to shine along the way, but because they’ve amassed such a staggering lineup of talent, it makes you wish some of the supporting players had been better fleshed out. This is particularly the case with Kaling, Paulson and Awkwafina, and it’s the movie’s one real weakness.

But it makes a real statement to revisit an established franchise like the “Ocean’s” movies—which were ruled by roguish men—and place a murderer’s row of gifted actresses in the key roles. They also get to revel in their feminine sides thanks to the glorious costume work of Sarah Edwards, who not only crafted their stylish wardrobes but also worked with top designers including Valentino, Dolce & Gabbana, Naeem Khan and Zac Posen to create the stunning gowns the characters wear for the main event. Bullock’s black-and-metallic Alberta Feretti dress is a total knockout, as is the emerald-green, beaded Givenchy jumpsuit Blanchett wears.

So you can turn your brain on or off watching “Ocean’s 8.” Either way, you’ll have a blast—and you’ll be counting the days until the next job. 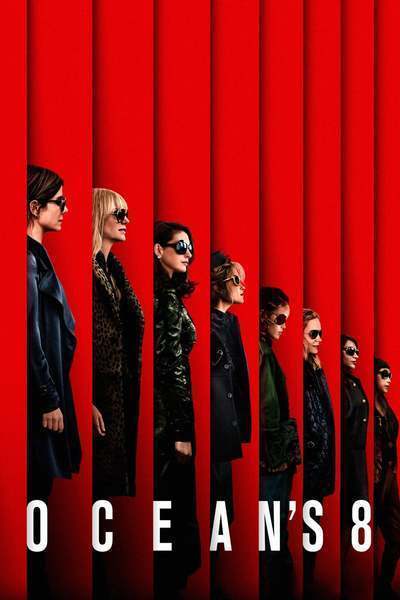 Rated PG-13 for language, drug use, and some suggestive content.