These days, it seems as if virtually any movie that's at least 25 years old and not named "She’s Out of Control" is now considered a classic. This attitude has become so prevalent that even a film like the 1989 version of “Pet Sematary” is now considered to be a work of greatness in some quarters, even though that take on Stephen King’s infamously dark 1983 novel was, aside from a good performance from Fred Gwynne at his most avuncular and a cheerfully cheesy title song from the Ramones, little more than gross, stupid, and incompetently made garbage. Of course, for anyone contemplating the notion of doing another adaptation of the book, there's an advantage in that they don’t have a true classic along the lines of Brian De Palma’s “Carrie” or Stanley Kubrick’s “The Shining” casting a shadow over their efforts—all they really have to do is come up with something marginally better than an unforgivably terrible movie. With their take on “Pet Sematary,” co-directors Kevin Kölsch and Dennis Widmyer have managed to do just that, though in this case, the emphasis is much more on the “marginally” part than the “better.”

For those unfamiliar with the story, it begins with the Creed family—husband Louis (Jason Clarke), wife Rachel (Amy Seimetz), eight-year-old daughter Ellie (Jete Laurence), two-year-old son Gage (Hugo and Lucas Lavoie) and beloved house cat Church—arriving in the quaint rural town of Ludlow, Maine to move into a charmingly rustic home with plenty of curb appeal. Alas, if one makes the mistake of stepping off said curb, they run the risk of getting pancaked by one of the semi trucks that incessantly roll down the highway just off of their driveway. If that weren’t a jarring enough discovery, consider the fact that the back part of their property houses a local pet cemetery where kids have been interring their furry friends for decades. Before long, Church gets killed by a truck and when Louis despairs of how to break the news to Ellie, next-door-neighbor Jud (John Lithgow) offers to help Louis bury him. After being assured that Ellie really and truly loved him, he takes Louis far beyond the pet cemetery to another area of the woods and has him bury Church there instead.

Even if you're unfamiliar with the particulars of the story, it will probably not come as a surprise to learn that the next day, Church returns, albeit somewhat worse for wear—he smells awful, he is ill-tempered and begins lurking about as if he was a prop in a horror movie. Yes, it turns out that this burial ground has the power to bring the dead back, though, as a now-regretful Jud points out, they are not the same as they once were. It will probably come as even less of a surprise to learn that, following an even greater tragedy, a grieving Louis will choose to take advantage of the burial ground once again in the belief that things will surely work out better this time around. Needless to say, it all goes bad as Louis’ well-meaning attempt to cheat death quickly devolves into a Grand Guignol-style procession of flashing knives, spurting blood, and sliced hamstrings.

Granted, King’s original novel was little more than an extra-gruesome riff on the classic tale “The Monkey’s Paw.” But while it was not one of his more elegant efforts, the book hit readers with a gut-punch that allowed them to overlook all the plot holes (ranging from why Jud would even bring up the burial ground in the first place to wondering why a family with two young kids would buy a house that close to a busy highway) and also worked as an exploration of people struggling to process intense feelings of grief and loss and how short cuts can lead to disaster all around. In adapting King’s book, screenwriter Jeff Buhler mostly sticks to the plot basics but cannot figure out how to execute them effectively. “Pet Sematary” quickly becomes an increasingly dire contraption in which every third line of dialogue is overly fraught with portent, used to mark time between the increasingly ineffective jump scares and gross-out moments.

Those who are familiar with the previous iterations of “Pet Sematary” will notice a couple of fairly major deviations this time around—one of them revolving around the victim of the tragedy that inspires Louis’ mad act of attempted resurrection, and a new ending that tries to outdo the already bleak tone of the original. The former is not a bad idea in theory and might have led to some legitimately creepy moments in a film made with more grace than this, but ultimately adds up to nothing. (In a bizarre move, the producers have inexplicably elected to highlight this particular deviation in the trailers, thereby killing off a moment that might have legitimately shocked viewers.) Likewise, the new ending is one that might have sounded good in theory but comes off here as a pointless twist that takes one of King’s most haunting finales and reworks it into something that seems to have been repurposed from an abandoned “Creepshow” story.

Although “Pet Sematary” is a largely dreadful film, it is slightly better and never as offensively bad as the first version. And a couple of the performances are pretty good—Seimetz and Laurence are both reasonably touching and believable in their roles and Lithgow’s amiable old coot game is strong as well. That said, this is still one of those stories whose ghastly power works best on the page, because it forces the mind to conjure the kind of imagery that most people go to extraordinary lengths to avoid having to contemplate in real life. Brought to life, both then and now, those unimaginable horrors can’t help but come across as greatly reduced and rather silly by comparison. As a result, an unforgettable work of horror literature has once again been reduced to an eminently forgettable movie that may do well at the box office for a week or two before disappearing from view and evaporating from the mind. The only genuinely scary thing about this "Pet Sematary" is the possibility that a couple decades from now, some may convince themselves that it too is a classic. 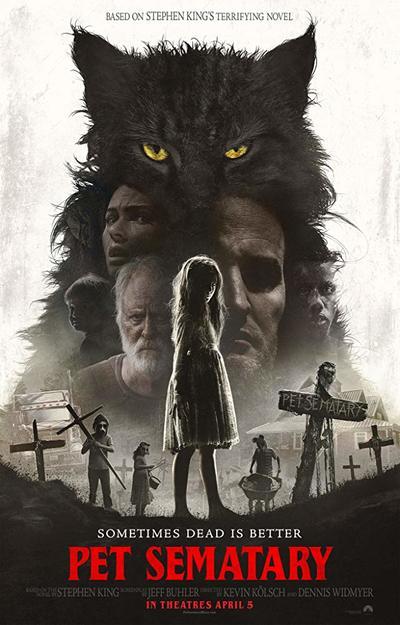 Rated R for horror violence, bloody images, and some language.