I understand that making your name in a massive blockbuster fantasy franchise in which you play one of the lesser (but very likable!) Hobbits presents a lot of where-do-we-go-from-here challenges for a performer. Dominic Monaghan, who played Merry in the “Lord of the Rings” pictures, has chosen poorly with his latest project, “Pet.”

Monaghan plays Seth, an assistant at an animal shelter. He’s kind, caring and loves the animals a lot; when he has to assist in the destruction of a German Shepherd of whom he’s fond, the vet actually presses him about adopting the dog. His building doesn’t take pets, Seth responds. Move, the vet counters. On nine dollars an hour, Seth retorts. Such is Seth’s lot; living alone, in humble quarters.

This is one of those movies in which the main character is a perfectly round-edged sad sack who, after the precipitating incident of running into a high school crush, suddenly acquires an expertise in stalking. Soon Seth is Googling like mad (the website he uses is a fake one called “Sleuth,” and good on Google for making their name hard to use in trashy movies like this one), visiting Holly’s place of work, and asking a surly and burly coworker, Nate (Da'Vone McDonald), how to talk to girls.

During his incredibly inappropriate pursuit of Holly, during which he fritters away most of the sympathy a viewer might be able to muster for him, Seth makes a particularly bad move and ends up taking a punch to the face, which he laughs at, because chasing Holly has unhinged him just that badly. But wait! In the fracas accompanying the beating, Holly loses her diary, which Seth absconds with. And upon examining it, he discovers something that motivates him even further.

And so, despite making only nine dollars an hour, he buys a bunch of welding equipment and the components to make a human-size cage. (Maybe he has a really good credit score.) He puts the cage in a super-restricted area of the shelter, kidnaps Holly, and, when she awakes in her underwear and in a cage, he tells her that he’s going to “save” her.

What’s going on here? Actually, you’ll be able to guess quite a bit of it if you choose to see this picture. Including the actual nature of the relationship between Holly and her sassy-‘n-tatted roomie Claire (Jennette McCurdy).

The rank, idiotic implausibilities continue to mount, including Seth’s transformation from a wholly recessive personality into a kind of master of psychological manipulations. The movie is also replete with nasty shock effects (captivity really does a number on Holly’s manicure, for one thing) and stupendously banal dialogue: “Look, I’m not some psycho, okay?”; “You just have it all figured out, don’t you?”; and of course the inevitable “You don’t get it, do you?” The movie, directed with unbecoming relish by Carles Torrens from a script by Jeremy Slater (who wrote the disastrous 2015 “Fantastic Four,” which maybe made him bitter) sputters and pants its way to a kind of twist, one that’s genuinely misogynist on the one hand but also too cretinous to be authentically repellent. In a movie year in which I’ve had to see both “Clown” and “Trash Fire,” the bar for worst of year is pretty low. I suppose that “Pet,” for me at least, completes a trifecta of sorts. 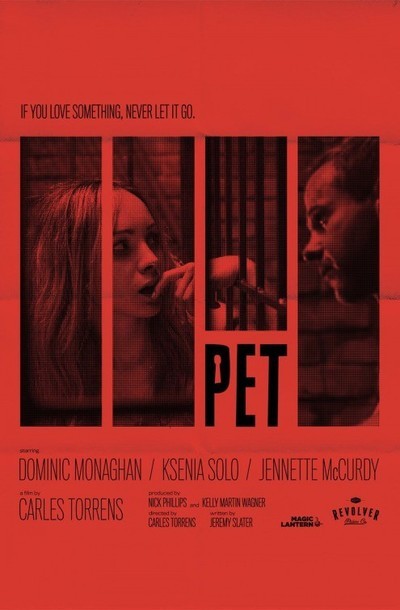