Richard Bates Jr.’s “Trash Fire” is a pitch-black relationship comedy that turns into something even more disturbing in the second half. Some of it is tonally inconsistent and the end feels rushed, but strong performances, especially from the great Fionnula Flanagan, along with Bates’ unique voice keep it engaging. It’s a movie that’s constantly threatening to become something a bit better than it actually is, but there’s enough of that promise in this creatively askew version of a story we’ve heard before that the movie works. It’s kind of like “Meet the Parents” crossed with “Psycho” and it’s a dark, nasty piece of work in most of the ways it should be.

Adrian Grenier (“Entourage”) plays Owen, a guy who’s, well, kind of an asshole. We meet him fighting with his girlfriend Isabel (the excellent Angela Trimbur) and soon learn of his various personality deficiencies. He’s an aggressive guy, one who can’t be bothered to remember the jobs of his wife’s friends and drinks to excess. In fact, the film’s biggest flaw is that Owen is such a loathsome prick in these early scenes that one wonders what the hell Isabel saw in him in the first place. Although there’s something interesting in the idea that these two are in the final days of a relationship—those moments in which sex is more sporadic than fighting and the clock is merely ticking to the end. Their impending break-up is interrupted by a pregnancy, which Owen handles with typical dickery but eventually comes to see as the start of a new chapter in his life. He will be a better person to be a good father, and to start on that road he must first reconnect with the family he left behind.

When Owen was a teenager, his parents were killed in a horrible house fire. Owen blamed himself for the fire, which also horribly scarred his sister Pearl (AnnaLynne McCord). Pearl and Owen were sent to live with their cruel grandmother Violet (Fionnula Flanagan), but Owen took off one day, leaving Pearl stuck in the house of horrors. Now, Isabel insists that she meet Violet and that Owen reconnect with his sister before they start a family of their own. Her intentions may be good, but some families shouldn’t reconnect.

Almost instantly, we can sense that there’s way more going on with Violet & Pearl than Owen has conveyed to his girlfriend. The first time we see Pearl, she’s sneaking around in the middle of the night, spying on Isabel through a peephole while she touches herself (the first direct nod to “Psycho,” which is followed by an even-more-direct shower scene later in the film). Something is a bit off with Pearl. And Violet is just a vicious, cruel woman, the kind who openly calls Isabel a whore when she learns she’s with child. Violet is one of those women who hides her sociopathology behind the veil of religion. In Bates’ most daring moment, he even has her masturbating to televangelism. As soon as we meet her, especially as played by the perfectly acid-tongued Flanagan, we know she’s going to be bad news for Isabel.

Bates has a twisted, pitch-black sense of humor, often reflected best in his dialogue: “I used to take his name in vain too. Then he killed my parents and set me on fire.” To enhance a relatively straightforward first half, Bates and his cinematographer Shane Daly can sometimes get a little flashy with fisheye lenses and dialogue delivered straight to camera. Not all of the visual choices work. And the film builds tension only to run headfirst to its conclusion. I’m all for WTF endings, but the air comes out of this one a bit too fast.

Having said that, there’s a twisted voice at play here that I like, and Trimbur and Flanagan give particularly strong performances. In fact, Grenier almost takes a back seat in the second half as Trimbur’s quest to, at first, get some respect from her future grandmother-in-law, drives the narrative. She’s got great comic timing, and matches up well in scenes with Flanagan. “Trash Fire” is a strange little slice of what I used to call “Picket Fences Horror”—the idea that there’s more going on behind those perfect white fences than middle America would like you to believe. To some of those houses, you really shouldn't go home again. 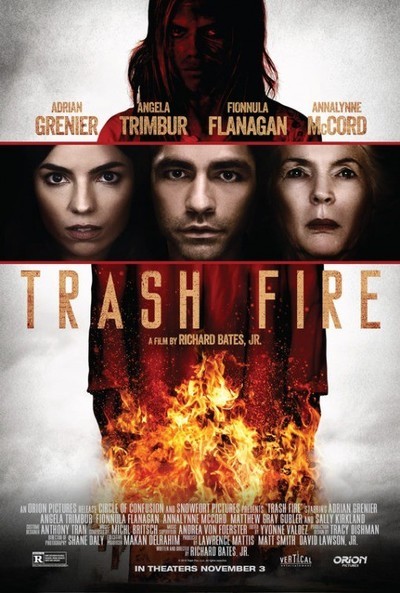