Purists will be peeved, but whatever is wrong with this new version of Jane Austen’s “Persuasion” has little to do with its modern makeover.

We’ve seen countless contemporized takes on Austen’s classics, from the high-school matchmaking of the quotable “Clueless” to the recent “Emma.,” which stayed true to the Regency time period but was so fresh and alive, it felt brand new. Just this year, Andrew Ahn’s “Fire Island” had the vision to take “Pride and Prejudice” and turn it into a frothy rom-com in queer paradise.

If anything, director Carrie Cracknell’s “Persuasion” achieves an intriguing pop-culture full-circle moment. Austen influenced “Bridget Jones’s Diary,” and now Bridget herself seems to have influenced Dakota Johnson’s thoroughly charming portrayal of Anne Elliot. There’s lots of drinking red wine straight from the bottle, crying in the tub and lying around in bed, narrating her romantic woes with a familiar, self-effacing wit. She also repeatedly breaks the fourth wall, “Fleabag”-style, with an amusingly dry aside or a well-timed eye roll. Anne jokes that she’s “thriving,” and clearly she is anything but, but she’s so winning in her state of loss that we can’t help but root for her. Johnson doesn’t get to be funny very often—go back and watch “Fifty Shades of Grey,” if you dare, for a taste of her under-appreciated comic timing—so it’s a pleasure to see her show off that side of her talent again here.

Johnson, and several of the supporting players, manage to hold the film together when the lack of stakes and emotional weight threaten to pull it apart. Still, it’s impossible to care about whether Anne ends up with Frederick Wentworth because, as played by Cosmo Jarvis, he is so stiff and uncharismatic. There’s not a single moment in their interactions that makes us understand why a woman who’s so practical and astute would be pining for him for the past eight years. Austen’s final novel is called “Persuasion” because it’s about how the snobs surrounding Anne persuaded her to reject Wentworth when he had no rank or fortune. Now he’s back, and he’s a captain, but he remains a dreadful bore. There’s supposed to be a distance and an awkwardness when Anne and Wentworth reconnect, but there’s also no friction or tension, leaving us to think her friends and family probably had the right idea way back when.

Anne has remained single all these years, but her family is in a state of flux at the film’s start. On the brink of financial ruin because of the impulsive spending habits of the vain Sir Walter Elliot (Richard E. Grant, in a perfect bit of casting as the preening patriarch), the family must downsize to more suitable digs for the time being. As they move out of their estate, Admiral Croft and his wife move in—and she happens to be the sister of Wentworth. His return from the Napoleonic Wars prompts Anne to reflect on their romance, including the “playlist” he made her, which, cleverly is a stack of sheet music. Johnson’s British accent is so-so; she doesn’t overdo it and become a posh parody, but she’s also a little inconsistent here. Still, there’s a new kind of soulfulness in her eyes that’s compelling, and of course she’s radiant even in her anxiety and sorrow.

Naturally, various obstacles stand in the way of Anne and Wentworth reconciling, beyond her pride and his mistrust. Mia McKenna-Bruce is a hoot as Anne’s vapid and narcissistic younger sister, Mary; the fact that she’s so acutely aware of and articulate about her many shortcomings actually makes her more appealing. Newcomer Nia Towle brings an effervescence to the role of Louisa, Anne’s sister-in-law, and one of several examples of the film’s “Bridgerton”-style approach to anachronistic, racially diverse casting. However, Louisa supposedly makes a romantic connection of her own with Wentworth that feels hurried and unearned in the script from veteran Ron Bass and newcomer Alice Victoria Winslow.

And once Henry Golding shows up as the arrogant Mr. Elliot, Anne’s caddish cousin, he provides such a much-needed romantic spark that you’ll almost wish she’d just run away with him already. Sure, he’s totally wrong for her, but he's the one man who’s on her level intellectually. Gorgeous people in fabulous clothes exchanging snappy banter: Give us more of that, please.

At least all the lush trappings you’re looking for in an Austen adaptation exist here, as the story travels from stately Kellynch Hall to the quaint countryside of Uppercross to the dramatic cliffs of Lyme to the chic townhomes of Bath. The lighting is cool and mysterious at night, bright and full of promise in the daytime. (Joe Anderson, whose previous films include David Lowery’s “The Old Man and the Gun,” provides the dreamy cinematography.) You want billowy dresses blowing in the beachy breeze, you’ve got ‘em, and that’s almost enough. 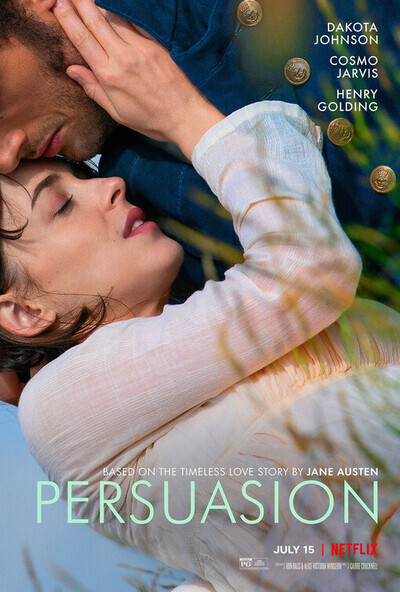 Rated PG for some suggestive references.

Writer (based on the novel "Persuasion" written by)